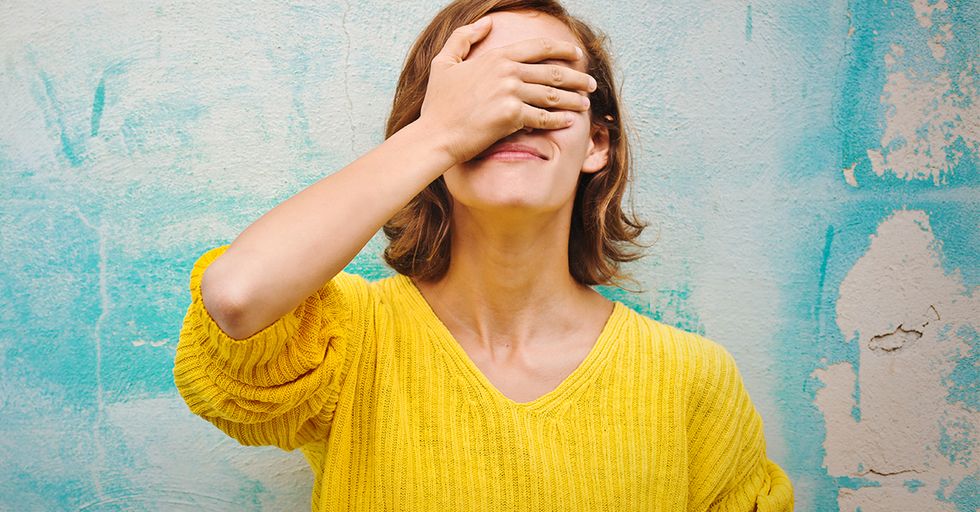 We all have moments in our lives where logic and intelligence escape us. It happens to everybody once in a while.

I think the technical term is "brain fart."

Brain farts are funny and hilarious and yes, make you question your own ability to move through the world.

I frequently see a man cross a four-lane road near my home. We have a fairly similar schedule and I see him often. He's well-known in the neighborhood and he's deaf. NBD. I once slowed down as he crossed the four-lane in driving, white-out, downpour rain and I thought to myself, aw man, he doesn't know it's raining because he's deaf. –Sloots_and_Hoors

I work at a hotel front desk and I accidentally locked myself out of the area behind the desk. I was frantically trying to figure out how to get back in without calling my boss at 2 AM. I spent 20 minutes trying to waggle the door open. And then suddenly I was like "oh this counter is 4 feet high. I can climb over it." –Vardamania

This thing you can't really Google

A few years ago I googled "do the people upstairs have a cat?" and it has never left me :/ –munstre

Wanted to light a candle. Struck a match. Changed my mind about which candle I wanted to light, and decided to light a Yankee jar candle instead. Couldn't get the lid off with one hand. Stuck the lit match in my mouth so I could use both hands to get the lid off. Couldn't smell the scented candle. Could only smell singed nose hair for days. –blinky84 I relate hard to the next one...

Went to a bank to withdraw money. Bank teller asked me how I would like it and I said: "in cash". Bank teller just stared at me, while my friend is dying of laughter. Meanwhile, I stand not understanding the issue. –extrmden7

A few years ago I could not figure out if the new electric stove was on or off. I was familiar with flame stoves so I stuck my hand flat on the heating coil. My hand had burnt circular stripes all over it. The stove was hot. –kim77angle

I once had a brain fart and forgot that porcupines were animals. I was hanging out with my family and my niece mentioned that her favorite animal was a porcupine, and I laughed for a good long time before explaining to her that porcupines weren't animals. I'd gotten them mixed up with pine cones. I have a graduate degree. My niece was maybe 6 at the time. She schooled me. –Secretlysidhe

Every elevator going down in a busy NYC hotel was already full of people so I decided to go up. When I got to the final floor I accidentally got out of the elevator instead of just staying put. –mlw72z We have probably all done some version of the next one...

This moment of full regret

I was on my phone when I felt a sneeze coming on. I quickly grabbed a tissue from the box on my desk and sneezed into it. I then went to the bathroom to pee. Instead of throwing the tissue into the toilet bowl, I threw my phone in. I don't think I've ever been the same since. –gazinbali

Told my friend that the 4th of July celebrations must be beautiful at the place we were. We were in Linlithgow, Scotland and I was talking about the palace and loch. Friend is Scottish. For obvious reasons, they do not celebrate the 4th of July. –Nopef**kthis

I took the wrong train to get back home and didn't realize it until I had already sat in it for more than half an hour. Twice. It was the same wrong train that leaves a few minutes before the train I wanted to take. I used to commute the exact same route for years. A one-hour drive took me five hours until I got home. When I realized that I was sitting on the wrong train AGAIN, I cried. –Oneminutewoman

One morning my vision was all blurry so I started freaking out and called my gramma to take me to the doctor. Then like 20 minutes later realized I just forgot to put my glasses on. I’ve worn them since 1st grade and totally forgot for half an hour. –Untouchable-joy

When I was cleaning out my shed in the back, I stepped on a rake and the pole smacked me in the face. Literally, like the cartoons. It happened three more times before I came up with the bright idea to move the rake. –ceeman77 The next one is laugh-out-loud funny...

I saw an animal in the woods behind my house and my immediate thought was KANGAROO! I live in Indiana. –My_neighbor_is_gay

My coworker asked if there is lactose in eggs, I thought to myself "they both come from the same animal, so maybe". For 5 seconds, I thought milk came from chickens. –Mrdjenjoy

I went my whole life thinking the saying was "the ghost is clear" instead of "the coast is clear". I'm 21 just found out yesterday at work lol –JonAnimeRivera

One time I was at the dentist and I had a lot of work done and it was stressful for me so I was not thinking too clearly. (At least that’s what I tell myself). The dentist told me that when I got home I should gargle with some salt water. And I asked, in complete seriousness, “oh, ok. And where would I get that?" –SnoutInTheDark

A couple of weeks ago, I heard my neighbors cat meowing, so I responded with a "meow" of my own. This went on for about 3-4 exchanges until I opened the door and found it was not a cat, it was just another dude meowing back at me. So many unanswered questions. –jtroxx Share this with someone who just had a brain fart!