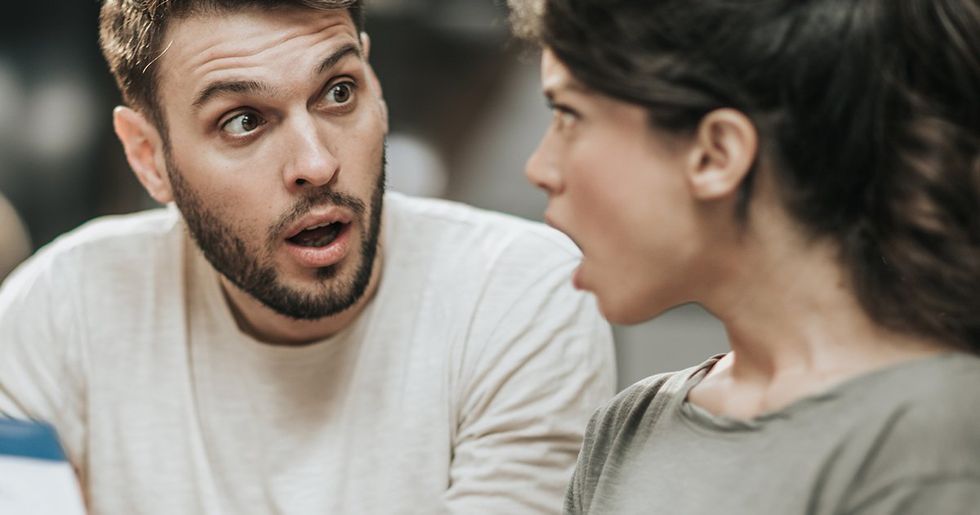 We've all been both the person explaining the dumb thing to another adult and also the adult who has needed the dumb thing explained to them. None of us are perfect and none of us know everything, even though we like to pretend that we do. At the end of the day, we're all human and we all make mistakes.

Some of those mistakes...however...are more cringe-worthy than others.

Have you ever had to explain a seemingly obvious thing to a person who should definitely know it already? I'm not trying to sound vague or cryptic here, but it's honestly astounding how many times people have explained ridiculous things to other adults.

You can always trust Reddit to come through with people sharing hilariously entertaining and cringe-y stories. One subreddit recently had people sharing the most ridiculous, dumb things they've had to explain to other adults. Some of these answers will truly have you shaking your head in disbelief.

Was tipped a twenty-dollar bill to be split between myself and a coworker. I handed her $10 I had in my pocket and took the $20. She said it wasn’t fair that I had $20 and she only had $10. I tried to explain to her that I already had the $10, so another $10 equaled $20. She couldn’t wrap her head around it, insisting I was trying to rip her off. She gave me back the ten bucks, took the twenty to a register and made change of two 10 dollar bills. As she hands me mine I showed her that now I still have $20 and she has $10, but somehow she was satisfied she’d thwarted my attempts to short change her. Needless to say, I didn’t stay friends with her after that. - camleep

That no matter how much you might want to put a camo pattern on your walls, you (not the paint) have to determine what that pattern looks like and you will also have to purchase multiple cans of paint tinted differently because "camo" doesn't come out of a can that way. - MeddlingDragon It's called aesthetic, sweetie. Look it up.

I had to explain to my friend that the earth wasn't 2019 years old. - Antares25 Not something you want to be confused about, quite honestly.

Had to explain to my wife that pickles were made of cucumbers. She didn’t believe me, still not sure she does. - Brownale78 The things you learn in cooking class!

That Earth has one moon. The new moon on the calendar every month confused her. - Frugal_Midwestern Who else is embarrassed for the person who needed this explained to them? Listen, everyone gets confused sometimes. Right?

That Halloween has never and will never fall on Friday the 13th. It was my mom. - theawkwardmermaid While this will never happen, it would be pretty awesome. How creepy would that be?

Blinded by the light

Turn off the high beams for cars traveling in the opposite direction. - _Poopacabra Unless your thing is blinding oncoming traffic.

Told my roommate that if he cooked food on less than the highest level of heat, he wouldn't burn as much food, and would generally have more success. A week later, I explained to him that when he was just boiling water, high heat was okay. - CrazyRainbowStar

I had to explain to a teacher, in front of her class, that a penguin was a bird. I didn’t want to be like that but she was adamant that if it didn’t fly, it wasn’t a bird. - chickenlaaag Can someone check this lady's teaching credentials? Because they sound a bit fishy. I mean, you literally just have to google "penguin" and the first thing that pops up is "bird."

There are more than 6 bones in the human body... she thought it was head, back, arms and legs. - CommonCreator What would we look like if we only had 6 bones?

Clean up after your pets, people.

Don’t bring your dog to work and let her pee/poop on the carpet. Tiny poop and little puddles are not ok just because they’re tiny. She weighs 4 pounds. He said she’s so little it doesn’t matter. He said he never even notices at home and if I had a dog, I’d feel differently. (Have a dog. Still don’t want urine and feces in my carpet—at home or at work.) - mystyry

Moms are hard to impress.

My mother told me nobody can live on $40,000 (USD) a year, and I was unable to get her to understand that it is pretty normal to make $40,000 or less and people do fine with that salary. - SyntaxGiraffe Keep reading for more dumb things people have had to explain to adults...

My friend worked at Office Depot and had to explain to a customer why he couldn’t make him photocopies of a 20 dollar bill. - ynm666 It seems like common sense, but some people have to be reminded that you cannot make copies of money.

Canada is part of North America. - Jonouy After scrolling through this list, I'd say plenty of people need to buy themselves a world map or a globe.

The next one is truly ridiculous.

That drinks have caloric content. A coworker was complaining how she was having trouble losing weight and didn't realize drinking 4 hot chocolates a day was not really conducive to weight loss. - freemasonry Listen, who doesn't wish that all drinks were calorie-free?

The mental picture of this next one is pretty entertaining.

Had to explain to someone that islands don't tip over if you put too much weight on the edge. - Usefuldrone There are no words.

As a server, there are so many times I have to explain to guests that chicken can’t be cooked “medium rare." - Anon29485382 The idea of chicken being cooked medium rare makes me feel ill.

We all know how elevators work, right?

This next one is quite bizarre.

To make pasta you have to boil the water. - caprijew How else would someone expect to make pasta? Listen, I'm all about finding new and inventive ways to cook things but there really seems to be only one tried and true method for cooking pasta.

That dinosaurs existed, and that "The King And I" is not the story of Moses. - chellis8210 Were these two things explained to the same person or two different people? What a mess.

What is wrong with people?

My wife and I had to explain to the neighbor that our dog is part of our family, and no they can't just have him. Their kids wanted our dog, which was cute, until the mother also decided that she wanted our dog and it was only fair that they got to have him on the weekends because we get to have him all week long. - PracticalBrad This enrages me.

Well, this is one I've never heard before...

Someone called my job complaining that several of her neighbors had ordered pizza so she should get a free one. Some people are dumb and entitled. - SidewaysInfinity What world is this person living in?

There’s a girl I used to work with who didn’t know submarines actually existed. - lacroixisbad You're doing amazing, sweetie...

One more time for the people in the back!

New Mexico. Is. A. State. You have no idea the number of people that believe we are a part of Mexico. - Electro522 Again - everyone who isn't sure about their geography skills. Invest in maps! Globes! Re-take a class! Anything to stop this madness!

If Santa isn't real...what IS real?

That the North Pole is an actual place on the planet and not just a mythical place where Santa and his Elves live. I also had to explain that the South Pole is real. Granted, they did not think Santa is real. But they also didn't believe me flat out about the poles, they first argued saying I was crazy and then Googled it. - happykittysmores I'm sure up until at least college I thought the same thing. It's fine. We're all fine.

I was flying back home from overseas with a friend, and I said something about how it was a bummer we couldn't bring fresh produce back. She asked why we couldn't, and I explained you weren't allowed to bring plants when flying/crossing borders. She thought it was absurd that I would consider a piece of produce (e.g. an avocado or mango) to be a plant. It became a pretty heated argument. - the_banana_standard

My mom asked me why you couldn't see the borders of states when you were in an airplane. Edit: My mother is a wonderful, unbelievably caring person. She just got a shit 1950s Catholic education. - AClubOfLosers

I had to explain to my friend that we didn't actually gain an hour of sunlight when we changed the clocks in the spring. - TheNightRumbler