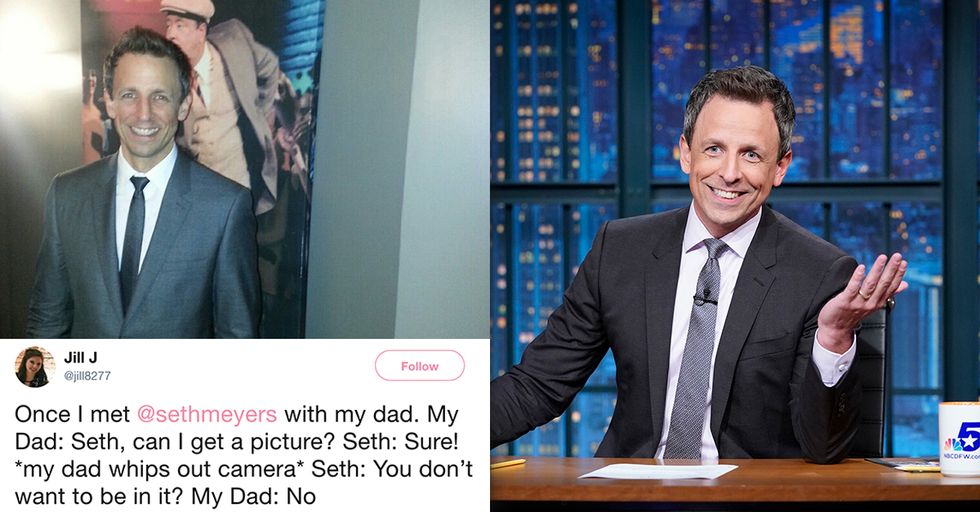 People Are Revealing the Dumbest Things They've Ever Said to Celebrities

Let me tell you a story. One time, when I was in college in Boston, I went to a free screening of I Love You, Man. Jason Segel and Paul Rudd were there to meet fans, sign posters and take pictures. Now, I love Paul Rudd. I love him so very much. And I was going to nail my interaction with Paul Rudd– he would realize that I was the one for him, and he would leave his family and everything he knew to be with me, a screenwriting major living with two roommates in Central Square.

Well, reader, I met Paul Rudd that night. We chatted as I glowed, and I touched his very soft sweater, and we took a picture. He swept me off my feet and out of the theater, and years later he's sitting next to me as I type this, rubbing my feet and feeding my grapes.

OK, I'm lying! It didn't go exactly like that. I sputtered and told him I loved one of his more obscure movies, and he was like, "You saw that?!" and I was like, "YesyouweresogreatyouaresogreatIjustloveyouImeanIloveditalot." At the time, I thought I was cool as a cucumber, but looking back, I was a total spaz. Meeting celebrities sometimes make us say and do dumb things. These are those stories.

Chances are you've had at least one encounter with a celebrity in your life. They end up in random places! Did you keep your cool for these encounters, or did you totally lose your mind?

I don't know who Mary Antoinette is but I bet Lady Gaga was confused and that's all that matters!

Ah, dads! Leave it to them to be the absolute weirdest people when it comes to meeting celebrities. Why would you take a picture of just Seth Meyers?! Incredible.

To be fair, I think this is the reaction we would all have if we met Hanson, only some of us would try to keep it inside.

Taking credit for Chris Martin's song when he jokingly says "Nice song" is maybe the best response ever. I'm so glad this happened.

@rachyymarshall I said “sorry for eating all the scrambled eggs at breakfast” to kevin jonas.
— consuelo BLM (@consuelo BLM)1541903891.0

This might be my most favorite one on the list. In a follow-up tweet, David explained, "The best part was her reaction because she literally just stared at me."

"Could you sandwich me" is such a hilarious, unintentionally sexual saying. But like, I'm also going to start using this all the time to see if it makes people give me sandwiches.

I love that this person told the most badass actor from The Walking Dead that his hands are soft. The best part, though, was his reaction: "Thank you, sweetheart. We try to take care of them."

I bet she was so nice and gracious about this though because she is a ray of sunshine and one of the best people ever to exist in the entire world.

Hilarious. Miranda Kerr's face in this photo definitely says, "Please get me away from these awkward sweaty girls."

@rachyymarshall not me but me and my ma met michael bublé at an airport once and she let him know that my dad calls… https://t.co/KTsA7rrOVA
— cáitlín (@cáitlín)1541895160.0

This is a really nice invitation! I can't believe Taylor had the reaction she did. That's so mean.

Ah, the old switcheroo! That's a good one. Especially because Mamrie Hart very much does not look like Nelly.

@rachyymarshall Once was sitting beside Maggie Smith in an airport lounge and asked her if she wanted MY autograph. I’m nobody. Damn nerves.
— luc dumont (@luc dumont)1541714109.0

I understand the nerves and all because it's Dame Maggie Smith, but this is egregious. I can imagine her perplexed stare.

This is a true tragedy because Mark Ruffalo is perfect the way he is and I hope he knows that. Mark, if you're reading this, you're great.

"Thanks, I made it myself." Brilliant.

I mean, what else are you supposed to say to Daniel Day Lewis besides like, offering him your milkshake?

Everyone knows that you always, always ask Harry Styles for a hug because I bet he will be willing to hug you and I also bet he's great at giving hugs.

I do bet that Matt Damon appreciated that you were trying to avoid whacking his children in the face. That's very kind.

This is incredible. This little girl left Salman Rushdie at the airport thinking, "Who does she think I am?"

OK, this person was just trying to be nice and Paris Hilton was basically like, "You know I'm rich, right?" Ew.

I mean, he's the one who warned us that winter is coming. What else are you going to talk to him about?

This is perfect and I bet Michael Keaton is the type of person who would totally appreciate this reaction. He seems like a really cool guy.

Sometimes celebrities make you forget how to perform basic functions like shake hands or form words or not drool. I get it.

@rachyymarshall On a looooong elevator ride with Kenny Rogers in the 80's, I complimented him effusively on "Margar… https://t.co/Lrd8ZtBVxs
— Steve Coulter (@Steve Coulter)1541778630.0

@rachyymarshall i met shia labeouf in fourth grade when he was filming transformers and i said “thank you mr. steve… https://t.co/kQW52Lydkr
— delaney (@delaney)1541808934.0

Here's the thing: Shia had to know that they were referencing Even Stevens, and instead of playing along and making a joke about it, he was mean!

To be fair, I feel like Emma Watson probably gets this reaction a lot. She's a magical person.

What are you going to do, not invite Britney to the Galapagos? Share this with the friend who knows all your embarrassing celebrity moments!