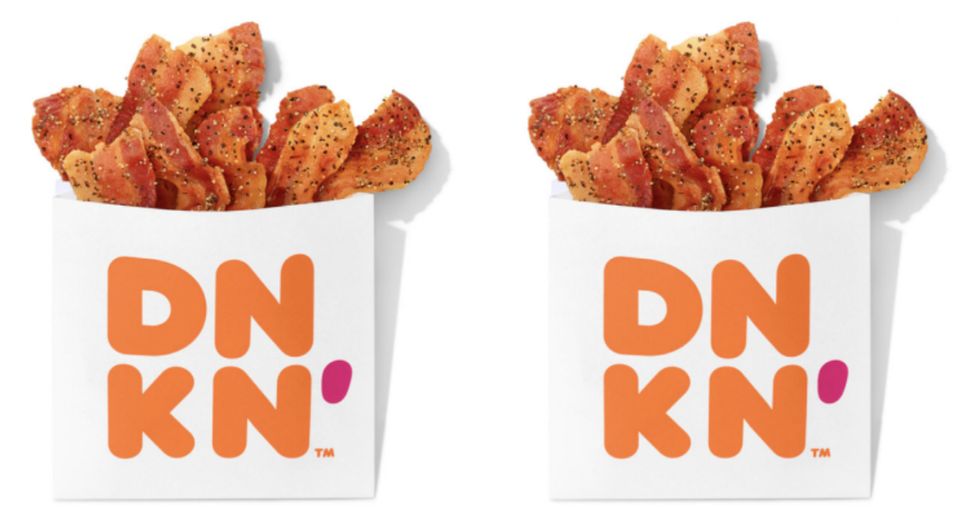 What's the weirdest combination of food you like to eat?

Fries in apple sauce? Ketchup with rice? Cake and milk? Or is your weirdest food combination simply just pineapple on pizza.

Dunkin' Donuts has launched a new product, that's a strange mix of sweet and savory.

Keep reading to find out what it is.

With breakfast options like pancakes and french toast, breakfast has the potential to be the best meal of the day.

But, is it worth getting up early for?

Would you rather have that extra 30 minutes asleep in bed?

Or would you rather eat and enjoy breakfast?

A hard decision to make every morning.

But normally whichever one you pick, you always wish you picked the other one.

Well, that question might not be an issue any longer.

As Dunkin' Donuts has released a new breakfast and snack option.

It includes a combination of strange flavors.

But Dunkin' has nailed all its other products. So why shouldn't we trust it with this?

Straight up, just a packet of bacon.

But this release gives fans the opportunity to enjoy just the taste of the bacon without anything else in the way.

The new breakfast or snack option is eight half-strips of bacon, covered in brown sugar and black pepper seasoning.

Perfect for snacking on the go as it is placed inside a paper sleeve.

To help conquer any cravings, the 'Snackin Bacon' is priced at only $2.79.

The Daily Mail Reports that Dunkin' says, "With its classic flavors featured in everything from toothpaste to vodka, bacon is a phenomenon. But, at Dunkin’, we believe the best way to enjoy bacon is simple: eat it."

So will you be trying it? Or is the combination of flavors too different for you to try?

People have been sharing their thoughts online and whilst some are very excited by it, others were very disappointed by it.

One Twitter user was excited by it, writing: "Snackin’ bacon. What a time to be alive".

Whilst another user tried the bacon and was not impressed, they tweeted: "I don't even know where to start. Not even close to what I was hoping for. @dunkindonuts #snackinbacon #undercooked."

Though others were just confused by it.

One user wrote: "Dunkin’ Donuts selling bacon" and attached a gif asking "what?"

The 'Snackin Bacon' isn't the only new product release by Dunkin Donuts.

As they've added some new products to the menu for St. Patricks day.

The new products include Matcha lattes which were released last week.

Irish creme coffee, shamrock donuts, and breakfast bowls will also be on the menu soon.

So, will you picking the 'Snackin Bacon'?

Or will you just stick with the classic donuts?