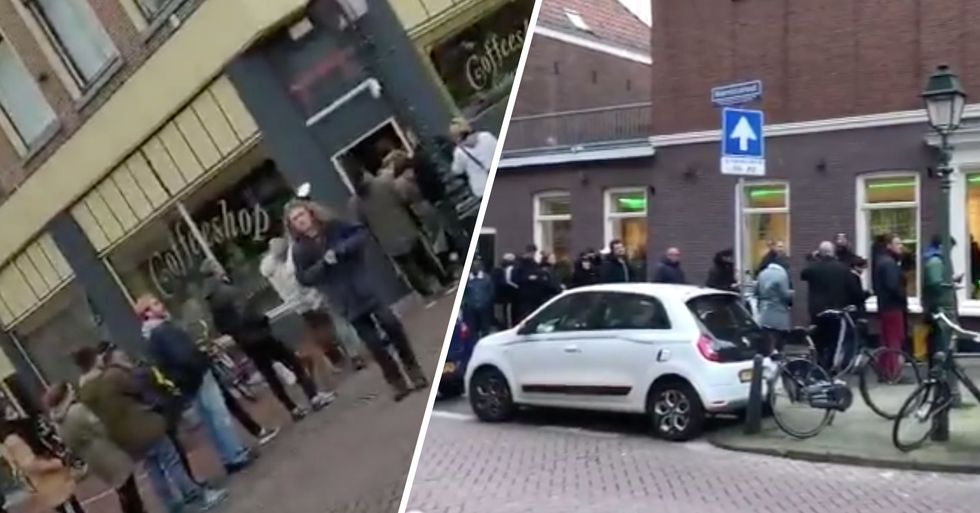 Many countries have been implementing nation-wide lockdowns and the Dutch city of Amsterdam has announced to close down bars and coffee shops for the foreseeable future.

Keep scrolling to check out the incredible sight of desperate Dutch people stocking up on their weed...

Many other countries in Europe have followed Italy's lead...

And more and more governments have been announcing lockdowns over the last week.

Amsterdam is one of the many cities affected by the pandemic...

And the usually busy Dutch city has been left deserted after tourists have been strongly encouraged to not visit.

Residents have also been advised to stay in their homes...

And the hundreds of bars and coffee shops in the town center have been forced to close for business - which is terrible for so many people trying to earn a living.

Like many other places in the world, locals have been buying in bulk...

And with Amsterdam being Amsterdam, toilet roll and dried pasta aren't the only essentials on people's lists.

Amsterdam is the capital of marijuana...

And with the drug being legal in the country, residents enjoy a casual joint every once in a while.

Weed is just as normal as regular cigarettes in Amsterdam...

So when the news of the coffee shops closing hit the city, residents flocked to get enough weed to see them through the pandemic.

People have been taking to social media to share the astonishing pictures...

And we must say, it is important to stock up on the essentials!

The lines are very long...

Meaning that the weed in Amsterdam must be something pretty special.

Dutch officials warned that the closure of bars and coffee shops may last until April...

Health Care Minister Bruno Bruins warned residents that more measures may be introduced in the coming days and weeks.
He said, "I am certain these will not be our last measures, the situation keeps developing very rapidly and we will keep deciding on further measures based on the knowledge of experts."

This is an unbelievably difficult time for our world right now...

So make sure to stay posted for any further updates.