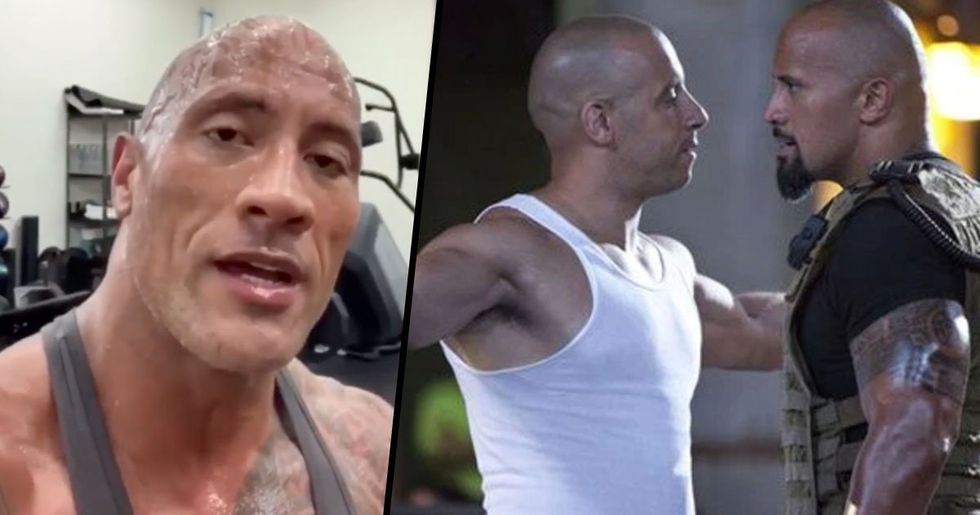 Fans of the Fast and Furious franchise will be no strangers to the beef between stars, Dwayne Johnson and Vin Diesel. After Johnson teamed up with Jason Statham for the much-anticipated Hobbs & Shaw spin-off, many of the original Fast & Furious cast saw it as something of a betrayal. Since then, there has been a lot of social media mud-slinging, with Diesel and Johnson being the main participants.

But it now seems peace has fallen within the Fast & Furious family. Johnson has taken to Instagram to put an end to the feud once and for all - and people are feeling all warm and fuzzy inside.

The Fast and Furious franchise is one of the most successful in history.

After debuting in 2001, there have been a whopping eight movies, each and every one a huge blockbuster smash. There are even two more already in planning for the future.

Vin Diesel is one of the stars almost synonymous with the franchise.

He's a verified Fast & Furious veteran, having appeared in the movies for almost twenty years. He plays the star of the show, Dominic Torretto.

Fast & Furious 9 is set to be released early next year.

And fans are pretty excited - not least because of the teasers Diesel has been dropping on his social media.

Another face who's almost synonymous with the series?

Dwayne Johnson. The star rose to fame as a professional wrestler, known as The Rock. At 6 foot 5 inches, we wouldn't fancy coming up against him in the ring.

Johnson has had a pretty illustrious career.

Many recognize him as the voice of the incredible demigod, Maui, in Disney smash Moana. Is there anything he can't do?

But there's one role that Johnson is almost synonymous with.

Johnson is a total staple in the Fast and Furious movies. He plays Luke Hobbs, an intimidating special agent and self-described “ice cold can of whoopass."

But behind the scenes ...

It seems as though all was not well on the set of the  Fast & Furious movies. In fact, the tensions between stars Diesel and Johnson have been well documented over the years.

And there's one thing which seems to have really exacerbated them.

Since the Hobbs & Shaw spin-off was announced, many of the original Fast & Furious cast have been feeling a little bit abandoned by Johnson.

The feud between Diesel and Johnson was exacerbated by Tyrese Gibson.

The star of Hobbs & Shaw posted a (now-deleted) Facebook video saying "candy asses" make his "blood boil." Many took this to be an implicit critique of Diesel.

But it seems the pair may have put the past behind them.

He posted an Instagram video of himself working out - and then seemed to extend an olive branch to his biggest rival.

First, though, he spoke of his role in Hobbs & Shaw.

Looking a little bit exhausted, Johnson speaks straight to the camera, saying, "I just want to say thank you guys so, so much."

"You have officially made Hobbs & Shaw not only a massive, global success."

"We've just crossed $750 million dollars at the global box office - but also, you helped enable a build-out and an expansion of the Fast and Furious universe."

But then he made a surprising admission.

Johnson thanks all who worked on Hobbs & Shaw - and then turns his attentions to a surprising figure. "Lastly, but not least, I want to thank brother Vin for your support of Hobbs & Shaw."

"What a wild ride this has been [since] 10 years ago, when you and I spoke and you invited me into the Fast & Furious family."

"I'm grateful for that invite."

"And as you know, my goal was always, all these years, to come into the Fast & Furious world and help elevate the franchise in any way that I possibly could..."

But there was an even more exciting part.

"We did it the right way, we did it the smart way, and again, brother, I appreciate your support. And, of course, all roads lead to one thing - I'll be seeing you soon, Toretto."

Many fans were super happy to see this.

The fact that the bad blood within the Fast & Furious franchise seems to be passing has come as welcome news to many.

Although some are a little more skeptical.

There are those out there who think this may be a clever publicity stunt by Johnson - and not come from such a good place, after all.

We hope Johnson doesn't have an ulterior motive here! Feeling excited about the next Fast and Furious movie? Keep scrolling for the cast side-by-sides - and an on-set video.