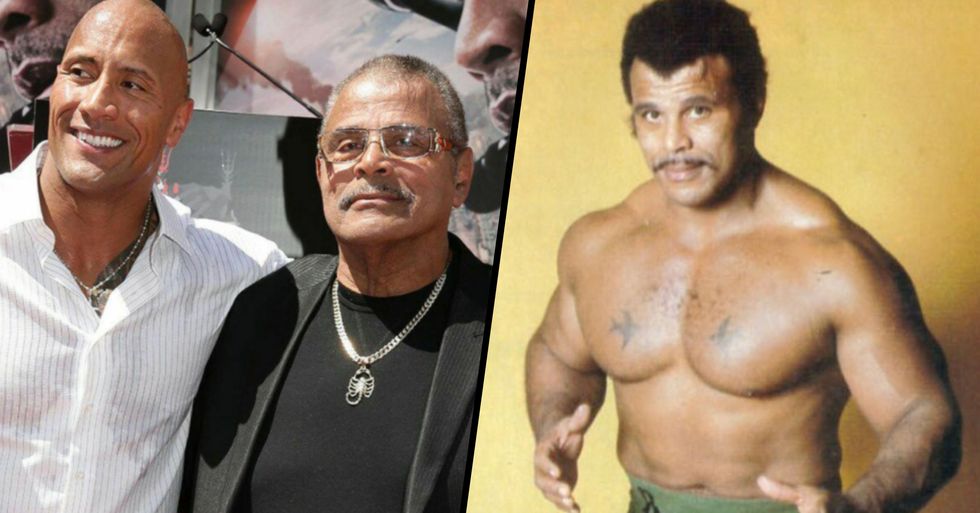 The former wrestler is a legend in the sports entertainment industry and gave us some iconic moments that will live on forever. Tributes have been pouring in for Rocky and now, his son, Dwayne Johnson, has finally spoken out.

Keep scrolling to hear what he had to say about the passing of his dad...

You may know him frim his movie roles.

Knowing that there was limited longevity in wrestling, Johnson successfully transitioned his career into another sphere. He's now as well known as an actor as well as a wrestler.

Johnson is probably most famous for his performances in the Fast and Furious movies. He plays Luke Hobbs, an intimidating special agent and self-described "ice-cold can of whoop-ass."

This is where Johnson first earned his nickname - thanks to his giant (and seemingly impenetrable) ring presence. We certainly wouldn't want to face off against him!

With his general trash-talk and bullying persona, his wonderfully evil-looking eyebrow, and his memorable catchphrase, "If you smell what The Rock is cooking," it seems he was made for the WWE.

For a long time, many have cited Johnson as one of the nicest guys in Hollywood - in stark contrast to his intimidating appearance and controversial wrestling reputation.

But none of this would have been possible without his father.

Dwayne Johnson's father, Rocky "Soul Man" Johnson paved the way for his son to thrive. On Wednesday night, news had surfaced that he had died at the age of 75.

The Hall of Famer is a legend in the wrestling world.

Along with Tony Atlas, he made history in the squared-circle by becoming the first-ever black world tag-team champions when they defeated the Wild Samoans in 1983.

Rocky trained his son to follow in his footsteps.

That's why he adopted the name, as a touching homage to his father. And to make things even more emotional, Dwayne even inducted him into the coveted Hall of Fame back in 2008.

WWE executive and wrestler Paul Levesque tweeted about the loss.

Better known by his in-ring name, "Triple H", he said: "A loss for every fan of @WWE, Rocky Johnson was a barrier-breaking performer. Our thoughts are with his family at this time."

I am so sorry to hear of the passing of the great Rocky Johnson. Always a gentleman, I always enjoyed talking with… https://t.co/qNhlhbjnwe
— Mick Foley (@Mick Foley)1579129443.0

"I am so sorry to hear of the passing of the great Rocky Johnson. Always a gentleman, I always enjoyed talking with him. My deepest condolences to his family, friends, and the fans who loved him. A very sad day for wrestling."

WWE hasn't revealed any details about the cause but a close friend said this:

Brian Blair, another 1980s WWE wrestler, was friends with Johnson for many years and they still went to church together in Tampa, Florida. He said that Johnson had been complaining about an unknown illness.

“He was just under the weather, he thought he had the flu or something. I said, ‘You need to get checked out, Rocky.’ He said he’d be OK."

"Then he missed this Sunday, a few days ago. When I talked to him again, he said he still wasn’t feeling good and he still missed church. He still didn’t get checked out. I talked to Sheila and she said he was just being stubborn. He died at home, today."

Further investigation into his death will be carried out as a formality.

But fans have been left devastated by the news of the legend's passing.

But now, he's spoken out.

It's no secret that Dwayne has always looked up to his dad...

So his passing is bound to have hit him incredibly hard.

In the days following on from Rocky's death...

Dwyane has remained quiet and hasn't addressed the issue. But now, he has spoken out, and has heartbreakingly revealed how he is "in pain".

Which showed Rocky, in the ring and in his prime. The actor wrote, "I love you. You broke color barriers, became a ring legend and trail blazed your way thru [sic] this world. I was the boy sitting in the seats, watching and adoring you, my hero from afar."

He praised his dad for his loving and passionate upbringing.

In the video, a young Dwayne can be seen watching his dad from the sidelines...

"The adoring boy who wanted to know only your best qualities. Who then grew to become a man realizing you had other deep complex sides that needed to be held and understood."

"Dad, I wish I had one more shot to tell you, I love you, before you crossed over to the other side. But you were ripped away from me so fast without warning. Gone in an instant and no coming back." "I'm in pain."

But Dwayne, being Rocky's son through and through...

Promised to power on. "But we both know it’s just pain and it’ll pass. Now I’ll carry your mana and work ethic with me, as it’s time to move on because I have my family to feed and work to accomplish."

He ended his post by reminding his dad just how proud he is of him...

"You lived a very full, very hard, barrier-breaking life and left it all in the ring. I love you dad and I’ll always be your proud and grateful son." "Go rest high."

Including his best friend and colleague, Kevin Heart, who wrote, "love you bro".

A true legend who lives on in his son.