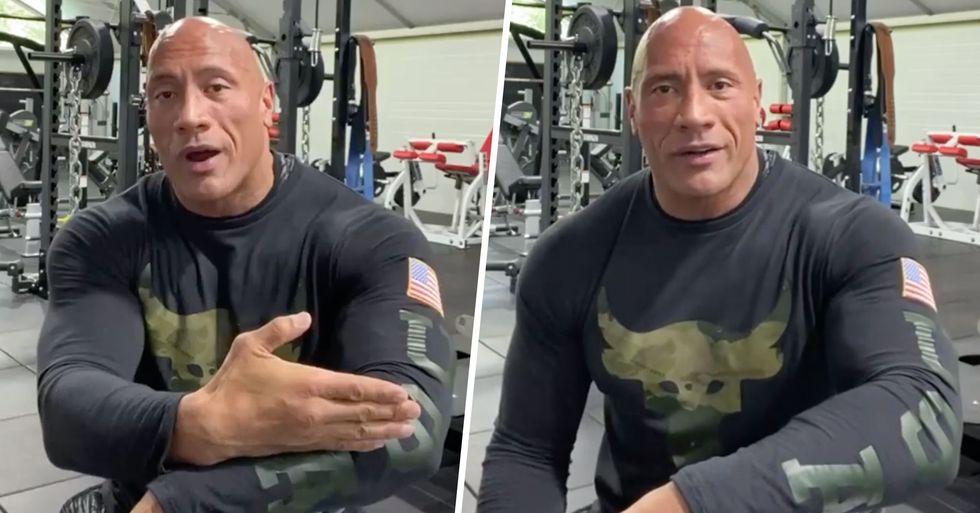 Dwayne "The Rock" Johnson has never been short of fans, whether because of his excellent wrestling career or enviable roles in blockbuster movies. He's also one of the most recognizable men in Hollywood thanks to his gigantic frame and distinctively expressive eyebrows.

But the journey to reaching this level of fame is never an easy one, as Johnson explained to his fans this weekend. He talked about how one particular encounter with a couple changed his life forever...

Keep scrolling for the emotional video...

The Rock is one of the most recognizable celebrities in the world.

This is where Johnson first earned his nickname "The Rock" - thanks to his ring presence. We certainly wouldn't want to face off against him!

Younger fans may know him from somewhere else though...

But for many, Johnson will always be "The Rock."

He's one of the most famous wrestlers of all time and has numerous titles and awards. Despite technically retiring from wrestling in 2004, The Rock still makes public appearances from time to time. I would refer to him as a part-timer, but right now, John Cena seems to have taken that spot. Yikes...

For a long time, many have cited Johnson as one of the nicest guys in Hollywood - in stark contrast to his intimidating appearance and controversial wrestling reputation. But Johnson almost undid all of that hard work by revealing this shocking story... Keep scrolling for the video.

We all know Johnson to be a grateful man...

But a recent revelation has had us doubting his mindset...

On Instagram, he told his 180 million followers a story that went on to define the rest of his life.

While doing a Livestream, he asked his fans to send in some more questions so he could answer them and one asked this...

It seems like a pretty simple answer, but viewers got more than what they bargained for. The Rock actually delved deeper into a personal moment that went onto define his entire life.

It all happened back in the 90s while he was still working for WWE.

He remembered feeling on top of the world because people would approach him no matter where he went, asking for autographs and selfies.

It made him feel like he had achieved "Jesus-level fame."

“I mean, I don’t know, I’m like the Beatles," he said with a laugh. “Guys, listen, Beatles, Elvis, Jesus, and I’m this famous now." His warped perception of reality made it harder to stomach this encounter with a couple that had approached him while he was at a restaurant.

They were beyond excited...

However, when they asked Johnson for a photograph and he replied in an enthusiastic manner, their demeanor changed completely.

They became embarrassed and started apologizing for disturbing him...

And no matter how much he tried to make them feel better again by offering other fan services, they politely declined and left. "I’m so grateful that it happened. I thank this couple, by the way," he said. “They probably have no idea that they were part of a defining moment in my life..."

The Rock described it as a moment that gave him goosebumps.

"They went from excited and sorry but really excited to then they felt bad. I have goosebumps now thinking about it. It took all of 30 seconds, not even 30 seconds, to realize that I had an opportunity to make somebody feel good and I made them feel bad... and what an a****** that made me."

It made him sit back and realize the impact he can have on a person's life.

"[Fans] all get the same treatment, and that treatment is gratitude, and I appreciate you coming up and actually asking for my autograph," he said, “because, by the way, the alternative to that is I go back to having seven bucks in my pocket and nobody giving a s*** to get my autograph or get my picture."

"On top of that, here’s the truth: You know, taking a picture, a selfie or signing an autograph, is literally one of the easiest parts of my job." And he has one last piece of advice for others who also wanted to be famous one day: "Don’t worry about being famous. Worry about being good at something."

If you want to read more about moments that changed lives, then keep scrolling to see how one cover ended up changing this woman's life forever...