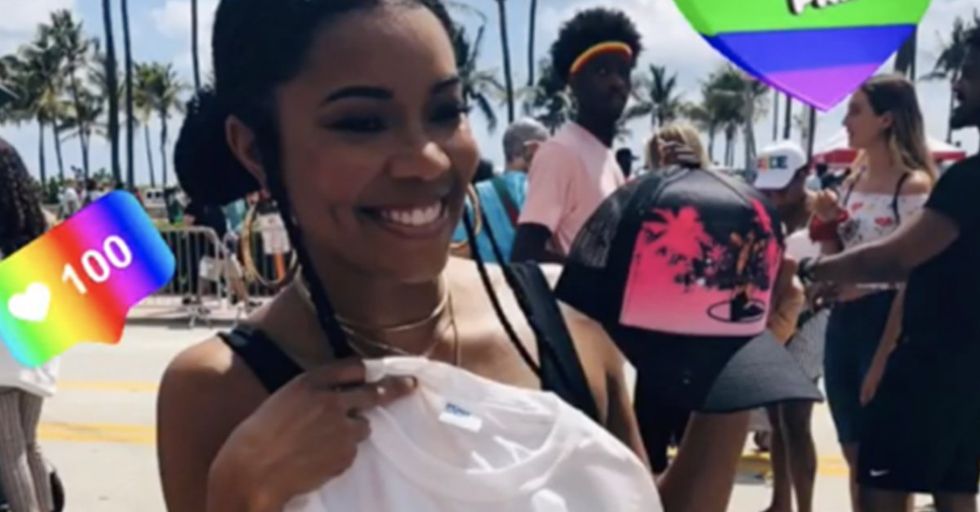 Dwyane Wade and Gabrielle Union are getting all the parenting kudos today! The couple's Snapchat stories showed off their fervent (and adorable) support of son Zion at Miami's Pride Parade.

The official Pride Month is still to come in June, but they got an early start in Florida! Miami's Pride Week is April 1-7, and its end-of-the-week festival was definitely a splash! Gabrielle Union brought her stepson Zion, and the two partied it up pride-style. Keep reading to see Union and Wade's heartwarming words of support for Zion. You can absolutely tell that love and affection are strong with this family, and it's wonderful to see. Plus, check out some other equally touching celebrity families who show nothing but love during Pride!

And in its wake, we're seeing tons of great pictures, including a few from actress Gabrielle Union and her stepson Zion!

It's one of the biggest LGBTQ+ events in the country, and this year Zion went and marched in the Pride parade!

Union and Zion had a blast in the festivities.

Zion's dad Dwyane Wade couldn't be there due to a game against the Toronto Raptors, but both stepmother and brother Zaire were ready to cheer him on!

"Zion had his own cheering section today," Wade wrote on his Instagram story. "Wish I was there to see you smile kid." Looks like everybody in the family who possible could came out to support Zion!

Union's photos from Pride are the cutest.

She was dancing and taking pictures with fans, and generally just being the life of the party.

Meanwhile, Zion was looking sharp with a rainbow ribbon.

Zion is 11 years old, and he hasn't said anything publicly about his sexual orientation yet.

But that's no matter.

Because either way, the whole family looks ready to support him regardless!

Wade says that Pride is important to them.

All in all, it seems like a great week.

Now, assuming your eyes haven't already melted from cuteness, check out these other celebrity families who show their kids support, during Pride and all year 'round!

Johnson's son EJ came out to his parents at the age of 17. TMZ may have publicly outed him a couple of years later, but Johnson was there to back his son up.

Here are Magic Johnson's own words on it:

“It’s all about loving them no matter who they are, what they decide to do," Magic Johnson said while appearing on The Ellen DeGeneres Show. “And when my son came out, I was so happy for him and happy for us as parents. We love him. EJ is amazing."

Singer Sting feels much the same.

He's the father to Eliot "Coco" Sumner, who prefers to remain fluid in terms of both sexuality and gender.

Sting has described his thoughts on the matter.

In fact, he's been a human rights activist for a long time. Back in 1996, during an interview with The Advocate, he said, "The whole business of sexuality is very strange to me. I mean, we have all the gay gene, don't we?"

Coco's mom had a few things to say, too.

Sting's wife, Trudie Styler, recently made her debut as a director with Freak Show, a comedy about a gender-bending teenager in a conservative new school.

While doing press for the movie, she was asked about Coco.

Specifically, she was asked about how Coco 'identified.' To which Styler replied, "She identifies as a musician, and the conversation should end there," said Styler. "She's a musician, and it’s very empowering. She’s the musical consultant on Freak Show and two of her songs are in the film. I’m very proud of her work, and love her to bits as my daughter."

Sally Field is a stalwart ally.

Her youngest son, Samual Greisman, is gay. And as it turns out, she helped Sam come to terms with his sexuality when he was younger.

She spoke a little about it in an interview with SiriusXM radio.

Speaking on her approach to parenting, she said, "I welcomed him to welcome himself, and find that part of his life." All LGBTQ+ kids deserve to have parents who welcome them like that!

Cynthia Nixon has been vocal about her pride in trans son, Seph.

When he graduated from college, she posted this adorable shoutout on Instagram!

Belinda Carlisle does Pride Week with her son.

Happy International Women’s Day! Thank you to my badass Mama @belindaofficial for raising me to be a feminist and a… https://t.co/kUFun2P2YR
— James Duke Mason (@James Duke Mason)1520535009.0

The GoGo's singer has said that her son, actor and activist James Duke Mason, came out to her when he was 14.

Carlisle has been actively getting involved with the ACLU and PFLAG.

“Most of my friends since high school have been gay or lesbian … so I was always aware of issues," she told Desert Sun.

In 2017, Carlisle wrote a love letter to the LGBTQ+ community for Pride month.

“There's a lot of love out there and that's why we celebrate each and every June," she wrote. "I've always been incredibly proud of my LGBTQ following, and I will always be there to stand up for you."

BRB, we're not crying at all.

She worried for her son when he first came out. “When it’s your own child telling you he’s gay, no matter how gay-friendly you are, it’s still a shock," she told MetroUK. "The first thing that came to my mind was: ‘What sort of world is this going to be for him?'" But at least it's a world where people like her are dependable allies!

Here's what Carlisle had to say about Pride Month:

“Pride is about showing the LGBTQ community that they have nothing to worry about — that everything is going to be okay." Well said, Belinda!

“I didn’t have a hard time in the beginning when Chaz came to see me and told me, ‘This is what I want to do,’" Cher told The Sunday Times. "I said, ‘Well, if you’re miserable, then you’ve got to do it.’"

Osmond's daughter, Jessica Blosil, came out as a lesbian in 2009. Despite the Mormon Church's more conservative take on homosexuality, Osmond supports her daughter unconditionally.

She spoke with Diane Sawyer about it.

“I think that my daughter deserves everything that she desires in life. She’s a good girl. She’s a wonderful child," Osmond said on ABC News. “I don’t think God made one color flower. I think he made many."

Miley Cyrus came out as pansexual in 2016.

She told Variety, "I think the LGBTQ alphabet could continue forever. But there’s a 'P' that should happen, for ‘pansexual.' Once I understood my gender more, which was unassigned, then I understood my sexuality more. I was like, ‘Oh — that’s why I don’t feel straight and I don’t feel gay. It’s because I’m not.'"

"We've always been very open-minded," Cyrus told E! News. "Listen, it's all about love and light. Forget the negativity and the haters … She's rocking and rolling and having a good time. What the world needs is love. There's too much hate …The world needs positive influences."

We're loving all these stories of parental LGBTQ+ allies.

Hopefully, like Gabrielle Union and her stepson Zion, we'll see more and more of them out living it up during Pride! Share this story and spread some pride too!