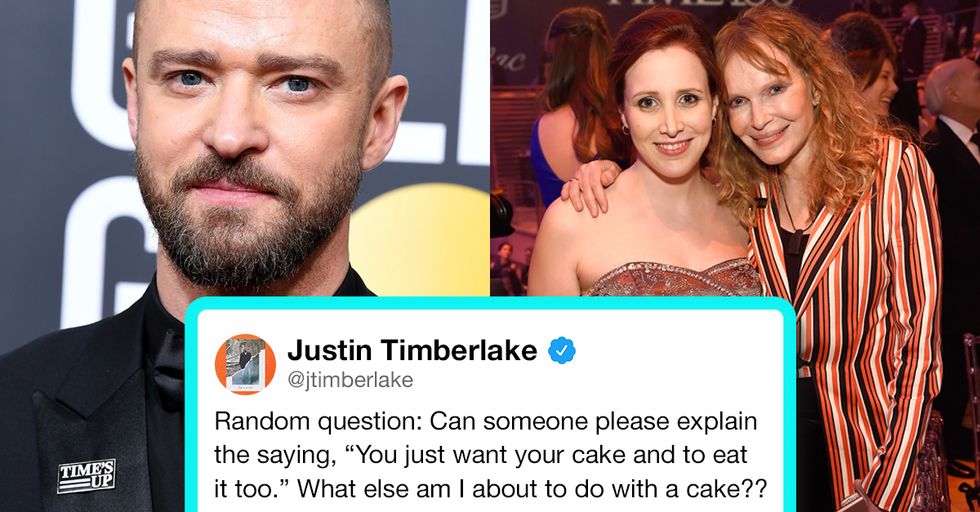 Dylan Farrow, just like women all over the world, is done being silent.

Farrow has spoken out in many instances about her experiences of assault at the hands of her adoptive father Woody Allen. And now, thank goodness, she's bolstered by the supportive voices of the #MeToo and Time's Up movement.

One recent way she used her voice for good was to call out and slyly drag Justin Timberlake on Twitter when he asked a random question. Farrow's response to him is Italian-chef-kissing-her-fingers good.

Dylan Farrow, pictured here with her adoptive mother, Mia Farrow, has long maintained that Woody Allen sexually assaulted her in the attic of their home when she was seven years old. Though Allen has always denied the claims, the story has haunted him throughout his career. In the wake of the #MeToo movement, Farrow once again amplified her story in an essay in the LA Times: "Why has the #MeToo revolution spared Woody Allen?"

Justin Timberlake, pictured here at the Golden Globes with a Time's Up pin on his lapel, is a pop superstar who happens to appear in Woody Allen's latest film, Wonder Wheel

Timberlake has a spotty record — he does a lot of saying he supports women while being complicit in their mistreatment. (Remember the nip slip we all refer to as Janet Jackson's? Yeah well, Justin Timberlake was more than a little bit responsible for the debacle, yet he remained silent while his career was spared and Jackson's suffered mightily.)

On Tuesday, Timberlake took to Twitter to innocently contemplate an idiom with which we're all familiar:

Random question: Can someone please explain the saying, “You just want your cake and to eat it too.” What else am… https://t.co/tiNyeiFVZC
— Justin Timberlake (@Justin Timberlake)1516721508.0

Maybe he was trying to be funny or something. I honestly can't tell.

He followed it up with this:

So I think it was a joke? Still, it's unclear. Timberlake definitely thought he was just going to ask Twitter a lighthearted question and get a few chuckles.

But Dylan Farrow wasn't going to let that happen. She answered his question thoroughly, if not also with the most intense subtext I've ever witnessed:

In other words, Justin Timberlake cannot wear the Time's Up pin and purport to be a supporter of women while staying silent about Woody Allen and continuing to reap the benefits of working with him. The Internet kind of exploded at Farrow's kickass response...

Justin Timberlake is a special case because this seems to be a pattern with him. Strong male allies would speak out against the injustices women face — Timberlake has a habit of just sitting back, staying comfortable, and collecting a paycheck.

And it's about time men like this get called out for their inadequacies. (This one is especially raw since it was announced that Timberlake would be back at the Super Bowl this year, performing the halftime show 14 years after Nipplegate.)

Plenty of people were quick to do take Dylan Farrow's hint-hint to the next level and ask Timberlake directly about his involvement with Woody Allen:

This movement simply isn't going to work if men don't also stand strong and refuse to support the careers of other men who are so obviously sexual predators. Though it's been too late for many years now, Colin Firth is one of the only people to finally say that he wouldn't work with Allen again.

Some questioned how Farrow seemed to target Timberlake here and leave other Woody Allen apologists like Kate Winslet out of the conversation:

@RealDylanFarrow @jtimberlake Sooo are we blasting Kate Winslet for being in the movie too? 🙄🤨
— Megan Reese (@Megan Reese)1516737980.0

But Farrow very clearly mentioned Winslet — and Blake Lively and Greta Gerwig — and chastised her comments about Allen in her op-ed for the LA Times. Scarlett Johansson, a main player in the Time's Up campaign, has also worked with Allen and has yet to speak out against him.

One thing is clear: Dylan Farrow and the #MeToo movement aren't backing down anytime soon.

This isn't a moment; this is truly a movement, a new reality. It's a chance for men to learn what it means to be a good ally, and that starts with listening. Listening to people like Dylan Farrow and not retreating when women try to hold them accountable for their actions.