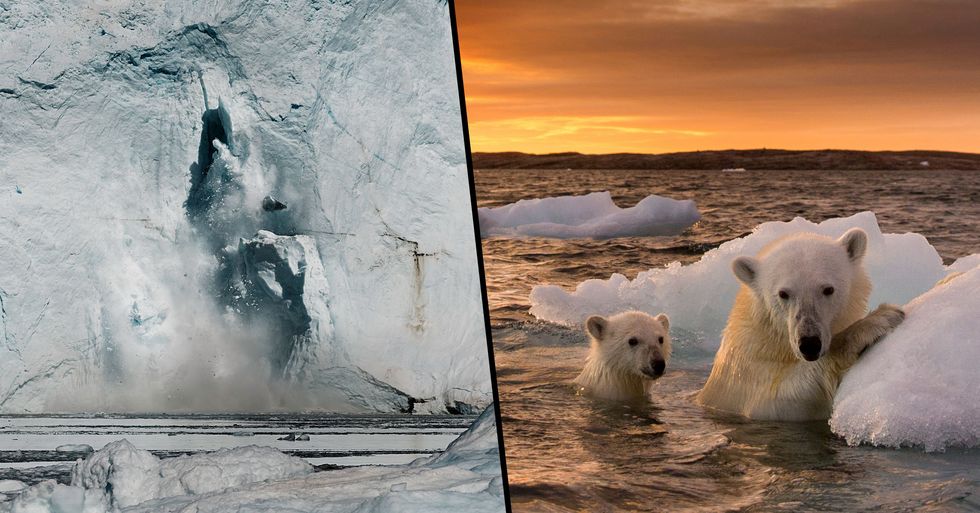 It's no secret that global warming is making the Earth's ice disappear at a shocking pace, but now, brand new research has uncovered some truly terrifying things about how much ice we've actually lost.

And, that's far from the only damming information the scientists uncovered...

Our planet's ice has been long under threat.

But recent research has given us some shocking statistics, that has left even the scientists stunned.

The shocking research has never been done before.

And it revealed several terrifying things about the future of our planet.

Of course, unless you've been living under a rock, you'll probably know that our planet isn't exactly in good shape.

In fact, experts have previously said that global warming is now happening at an "unprecedented" scale, with many claiming that human civilization may come to a screeching halt within just 3 decades.

The effects of global warming have been devastating.

There's no doubt that climate change as it stands is sending us down a very bleak path.

Worryingly, our very own president, Donald Trump, is one of those people, who continually deny that global warming is even a thing in the first place.

Just because many of the world's political leaders are failing to recognize the significance of the climate change crisis, it doesn't mean that other people aren't.

There's a huge number of climate change activists who have been taking the world by storm, aiming to widen the conversation surrounding global warming and offer ways in which we can make a difference for the sake of our planet.

The teen has drawn in praise from many for raising awareness over the risks posed by climate change while holding politicians to account.

Thunberg is known for her matter-of-fact manner of weighing into the issue.

And has somewhat become the face of the modern climate change movement.

It's safe to say that things still aren't looking great.

And that's exactly the case when it comes to our planet's ice.

Polar bears, for example, are feeling the effects of climate change more than most.

As the temperature in the Arctic increases, the ice that polar bears depend on is melting on a mass scale.

Climate change is really making life tough for them, especially considering the fact that their main prey - seals - are also at risk. There have been so many heartbreaking sights - from starving polar bears to those clinging on to the last bit of ice they have.

WWF has declared the species as "vulnerable."

With around 22,000 now remaining, at the time of writing. It's truly baffling to imagine the biggest land-based carnivores on the planet being so at risk in this way.

And this week, some shocking statistics have emerged.

Following recent research in Greenland, British scientists have unveiled the planet's total loss of ice since 1994.

This kind of research has never been done before.

"In the past researchers have studied individual areas – such as the Antarctic or Greenland – where ice is melting. But this is the first time anyone has looked at all the ice that is disappearing from the entire planet. What we have found has stunned us," Professor Andy Shepherd, director of Leeds University’s Centre for Polar Observation and Modelling, told The Guardian.

Twenty-eight trillion tonnes worth of terrifying, to be exact.

Yep, the Earth has lost twenty-eight trillion tonnes of ice since 1994.

Due to melting glaciers and ice sheets across the globe, the researchers also estimated that sea level rises could top a meter by the end of the century.

This will have a catastrophic impact on life. "To put that in context, every centimeter of sea-level rise means about a million people will be displaced from their low-lying homelands," Professor Shepherd explained.

This matches the Intergovernmental Panel on Climate Change’s damming predictions.

Not to mention the fact that due to the scale of the melting, Earth’s capability of reflecting solar radiation back to space is decreasing.

What exactly does this mean?

Well, when ice melts, darker ice is exposed underneath which absorbs more heat. This, combined with greenhouse gas emissions, contributes further to the climate change crisis.

The researchers concluded with this message:

"There can be little doubt that the vast majority of Earth’s ice loss is a direct consequence of climate warming. On average, the planetary surface temperature has risen by 0.85C since 1880, and this signal has been amplified in the polar regions." Interested in more news relating to climate change? Keep scrolling to learn about fifty small ways you can help the planet.