Eating Chicken Nuggets Increases the Risk of Early Death, According to Study | 22 Words 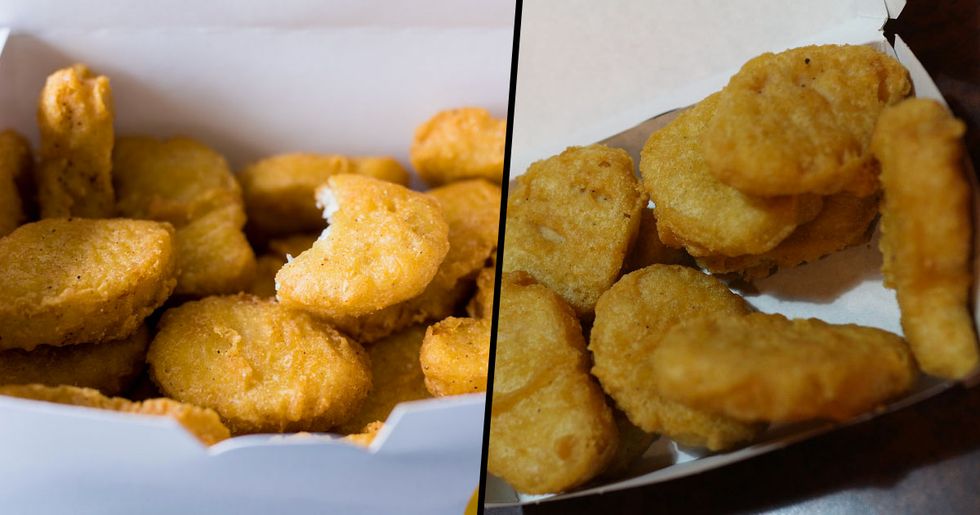 Eating Chicken Nuggets Increases the Risk of Early Death, According to Study

Life has its fair share of little luxuries, whether that's a hot bubble bath at the end of a long day at work, or indulging in a large glass of red wine with your feet up on the couch. But nothing comes close to delving into a box of twenty chicken nuggets - now that's luxury... or is that just me?

But this luxury may be short-lived after a recent study has found that our beloved chicken nuggets may, in fact, increase the risk of early death.

Before the entire world loses its mind, I'm here to look further into this matter. So read on before you throw the nuggets in the trash for good.

Where did the chicken nugget come from?

First things first: a little history into the famous nug. The chicken nugget was invented in the 1950s by Robert C. Baker, a food scientist professor at Cornell University.

The chicken nugget is a bite-size piece of chicken coated in batter and deep-fried. It doesn't take a genius to figure that out, really.

A big thanks to the fast food King that is Mcdonald's for making the chicken nugget what it is today. Chicken McNugget picnic, anyone?

Turns out, the chicken nugget could be a contributor to an early death.

Believe it or not, our beloved nuggets appear to be doing some pretty nasty stuff to our insides.

Scientists in France and Brazil discovered this ghastly finding...

Scientists found that the heavy consumption of ultra-processed foods has strong links to heart disease, which can lead, ultimately, to an early death. Pretty scary stuff.

With unprocessed foods however...

An association was found between the intake of unprocessed foods and a much lower risk of these diseases. Perhaps it's time to swap the nuggets for a salad...

But who is ready to ditch the nugs?

A separate study from The University of Navarra in Spain analyzed 10 years worth of data from 20,000 adults.

It was found that consuming more than four servings of processed food a day correlated with a sixty-two percent increased risk of death from any cause, not just cardiovascular-related diseases.

It was also found that each additional serving increased the risks by an extra eighteen percent.

Researchers from The University of Navarra stated: "Improving diet based on adherence to minimally processed food has been shown to protect against chronic disease".

These findings stress the importance of healthy eating.

The researchers go on to explain the importance of unprocessed foods: "Discouraging the consumption of ultra-processed foods; targeting products, taxation, and marketing restrictions on ultra-processed products; and promotion of fresh and minimally processed foods should be considered a part of health policy to improve global public health".

The British Heart Foundation have even had their say.

Senior dietitian Victoria Taylor said: "The classification of ultra-processed foods used by the researchers is very broad and so there could be a number of reasons why these foods are being linked to increased risk to our health; for example, nutritional content, additives in food or other factors in a person's life".

The suggestions have been made to adopt a Mediterranean-style diet.

Victoria Taylor said that a Mediterranean-style diet includes "plenty of minimally or unprocessed foods such as fruit, vegetables, fish, nuts and seeds, beans, lentils and wholegrains". "This, along with exercising regularly and not smoking, has been shown to be beneficial for lowering risk of heart and circulatory disease".

Well, when it comes to your health...

That doesn't seem too bad...

So we don't have to throw away the nuggets for good.

The point being stressed from this research is to make cut-backs and changes in our diets and lifestyles. Having chicken nuggets once a week rather than four times a week can make such a difference. Just kidding, you almost definitely shouldn't be eating nuggets once a week every week.

Our health is so much more important than indulging on luxuries like fast food every day.

And this doesn't just include chicken nuggets...

This includes foods such as burgers, pizza, ready-meals, and ice cream.

It's all about the little changes!

Small changes will not go unnoticed and your body will thank you for them. So there's no need to mourn the loss of your chicken nugs just yet, just take a break from them... Ross and Rachel style.