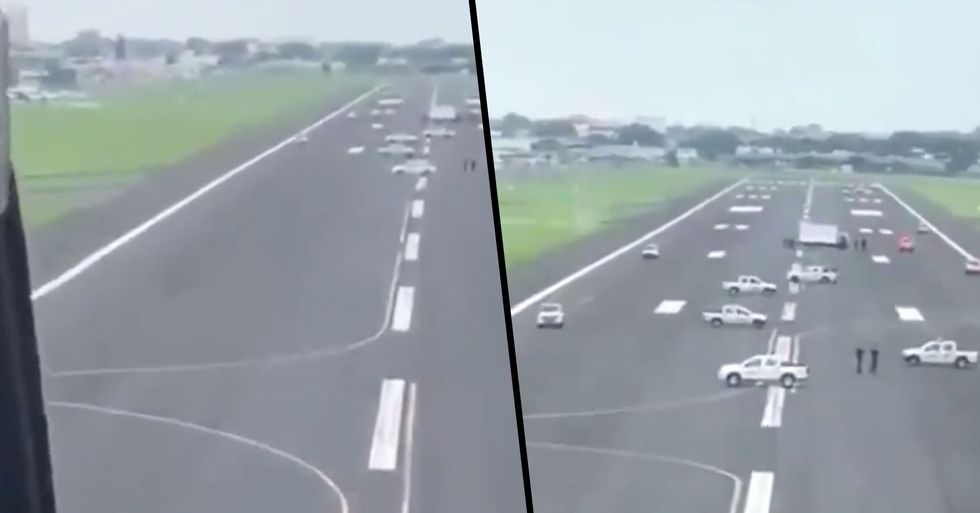 Like it or not, coronavirus, and the preventative measures we're being encouraged to take, are things that we have to be thinking about; it's serious stuff.

And this has been made clear with every incident we hear about in the news. This one is no different. After Spain was sent into lockdown, they have been trying to combat the disease as quickly and efficiently as possible. However, they have gone to extremely wild lengths to do so.

Keep scrolling to see the horrific video of a Spanish flight trying to land in Ecuador...

Europe has been decimated by the coronavirus.

And it shows no signs of stopping any time soon.

And as one country announces a lockdown, another one follows suit.

The United Kingdom has recently joined the list of countries that have shut down all unnecessary movement as a bid to tackle the spread of the virus.

But Italy and Spain have been on lockdown for 2 full weeks now.

As the cases of the disease keep increasing, government officials are finding it difficult to control people, without sending everyone into their homes.

Europe is one of the worst affected continents.

Italy's current statistics are close to overtaking China's. As the days pass, another country has surpassed all the others to line with these two badly affected countries. Spain.

The Spanish Prime Minister has spoken out about the condition of Spain.

Pedro Sanchez spoke out about how badly Spain has fallen victim and how they still haven't seen the worst of it yet.

“Confirmed cases and deaths will increase in the next days. We have to remain strong until the end of next week."

He continued explaining that most Spaniards “have never had to face something as harsh as this."

But he also praised those who have completely obeyed the strict outline to remain on lockdown until further notice.

According to the official counter, Spain currently has 33,089 active cases and has seen 2,206 die from the virus.

But in order to make sure everyone is safe and sound...

A Spanish rescue flight was sent to Ecuador in order to rescue the country's citizens and bring them home where they can begin the quarantining process.

However, things didn't quite go to plan...

An airport in the capital city of Guayaquil placed extra measures on their runway in order to block the flight from landing. This included placing trucks along the entire length of the runway. Keep scrolling for the full video.

But when that didn't work, they took things to another level.

They physically sent people out there to stop the flight from touching down in José Joaquín de Olmedo International Airport.

The empty aircraft found it difficult to land.

Except for the crew on board, the flight was empty, as it was reserved for 170 passengers to return home to Spain.

The airport scandal even had the backing of the Mayor of Guayaquil.

Cynthia Viteri said she was in support of the local authorities who put themselves in danger in order to prevent the plane from making a safe landing.

However, Ecuador’s Ministry of Transport and Public Works was against it.

Since then, the European Union has requested that Ecuador “provide guarantees of security in the use of the airports of Quito and Guayaquil for the arrival of empty flights and the exit of European citizens", according to Reuters.

We hope everyone is staying safe during this difficult time. If you're in the mood for more news related to the current pandemic, then keep scrolling...