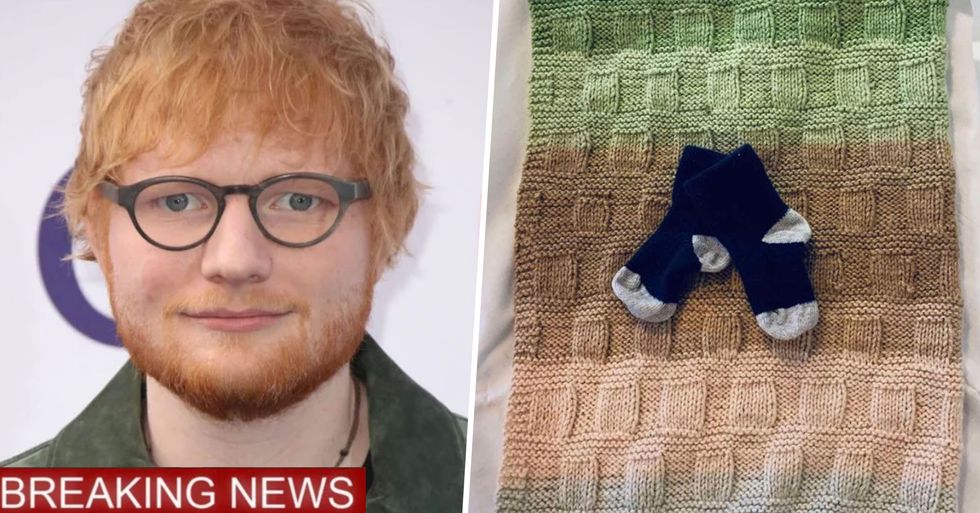 Grammy-winning singer-songwriter, Ed Sheeran, never fails to make the charts. Since his studio album debut in 2011, the star has dominated the industry on a grand scale, garnering millions of fans across the world.

But now it's his personal life which has hit the headlines, as a very exciting announcement has been reported...

The two met in high school when they were both just 11 years old.

Their relationship anniversary is the 4th of July of that year.

They live with their two cats, Calipo and Dorito.

Ed wrote the song "Perfect" about the proposal. We have to say, that'd be pretty hard to say no to!

As this latest relationship milestone proves...

Ed's career has been filled with similar success to his personal life ...

Back in 2010, an extremely shy Sheeran was posting videos online when rapper, Example, noticed his potential and invited him to tour with him. Remarkably, Sheeran managed to climb to number 1 on the iTunes chart before ever signing to a record label.

The British singer won the hearts of the nation with his stripped-back vibe and captivating humbleness - he was just a normal guy and his guitar - something that people clearly loved.

And, of course, he signed to a record label.

In January 2011, the star released yet another EP as an independent artist, which smashed through the charts to number 2 - catching the eye of Atlantic Records, who Sheeran signed on with the following month.

He's literally had hit after hit ever since.

But it was a tough road to fame...

There's no doubt that Sheeran comes from humble beginnings, but, Sheeran was once a bullied ginger kid who had to overcome major obstacles to get to be one of the wealthiest and most internationally successful musicians in the U.K.

As a child, the singer was teased relentlessly in school.

We all know how cruel kids can be, and Sheeran knows this reality all too well. The star was mainly bullied for being ginger, for needing oversized glasses after an eye surgery went wrong, and for having a severe stutter.

But music helped him through.

The singer discovered that, when he sang, his stutter disappeared. At 4-years-old he began singing in the church choir, leading him to take up playing the guitar, and, by eleven, he was already showcasing his talent - writing his own songs.

At the age of just fourteen, he packed up his belongings and headed to London to officially launch his music career. But, it wasn't all sunshine and rainbows, in fact, quite the opposite. The singer would frequently struggle to find a bed for the night - often having to couch-surf or even sleep on the subway or in parks, with no money for food.

But he didn't give up.

The rising star remained determined in his dream to curate a successful music career for himself, playing small venues, producing his own music and collaborating with other artists he met along the way.

But, once his big break came in 2010, there's been no stopping the star.

His global stardom has seen him release 4 critically acclaimed studio albums as well as collaborating with other music sensations such as Beyonce.

In fact, most recently, the star has released another collaboration album.

Having basically every major artist at his beck and call, we aren't entirely surprised to see a whole host of big names teaming up with Sheeran for his "No.6 Collaborations Project." From Justin Beiber and Eminem to Khalid and Camila Cabello, his latest musical venture isn't short of famous faces.

In an ode to his stardom, the singer has also been embarking on a one-of-a-kind world tour.

His "Divide" tour is the biggest ever, which commenced in March 2017, going on to last over a whopping 2 years, with a total of 280 shows across the world, 1 of which included headlining Glastonbury festival.

And it's earnt the star a staggering paycheck...

The "Divide" tour may have been pretty long and extremely hard work, but the twenty-eight-year-old has certainly reaped the benefits. The tour alone has earnt the singer an eye-watering estimated $77.5 million, taking the top spot for the highest-grossing tour, a position previously held by U2 for their  “360 tour."

But the tour came to a surprising end.

The star wrapped up the final leg of his mammoth world tour in a homecoming show in the town of Ipswich, U.K.

The singer had an emotional announcement for fans...

Speaking to the packed-out venue, the star told fans that he would be taking a lengthy hiatus from music. “As you may or may not know, I’ve been on the Divide tour for over two years now and this is the last day of the whole thing," he told the crowd.

Before revealing his plans for a semi-retirement, the star told fans how bittersweet the night was.

“There is something very bittersweet about it. I love that you guys are here and we are ending it in Ipswich. This is my last gig for probably 18 months."

“I was told before I came on that now at the end of this tour I’ve played to nine million people around the world."

"It is the biggest tour ever," he explained.

He continued by telling fans how emotional the day had been for him and his team backstage.

“It’s been an emotional day for a lot of people backstage. It kind of feels like, in a weird way, that you’re breaking up with a girlfriend that you’ve been with for years. It sounds odd but it has been a long tour."

Sheeran has a very good reason for wanting to take a break from music.

The singer wanted to take time away to focus on his family - and more specifically, Cherry.

Many speculated that this announcement would be the start of their family...

Speaking in June 2019, the singer said that he would be willing to sacrifice years on end to have kids with her and to focus on his family life. "I'm starting a life with Cherry. I can't spend the next twenty years on the road," he explained at the time.

"Kids would be the different thing. I wouldn't mind sacrificing for them."

"If someone told me you can't tour again for the next ten years if you have kids that is fine, because that is what I have signed up for. I've already achieved more than I thought I would, so now I'm just trying to have fun."

And now it seems as though the well-deserved break has paid off!

And reports have surfaced with a very exciting announcement regarding Ed and Cherry.

A source announced that the pair were expecting a child last month!

"They're very excited, but have kept things very low key," said the source.

"They are just making the last of the preparations at home, and the baby is expected later this summer."

"It's a really happy time and their families are all totally delighted for them and cannot wait to meet the new arrival."

Huge congratulations to the pair!

And for more exciting celebrity baby news, scroll on!