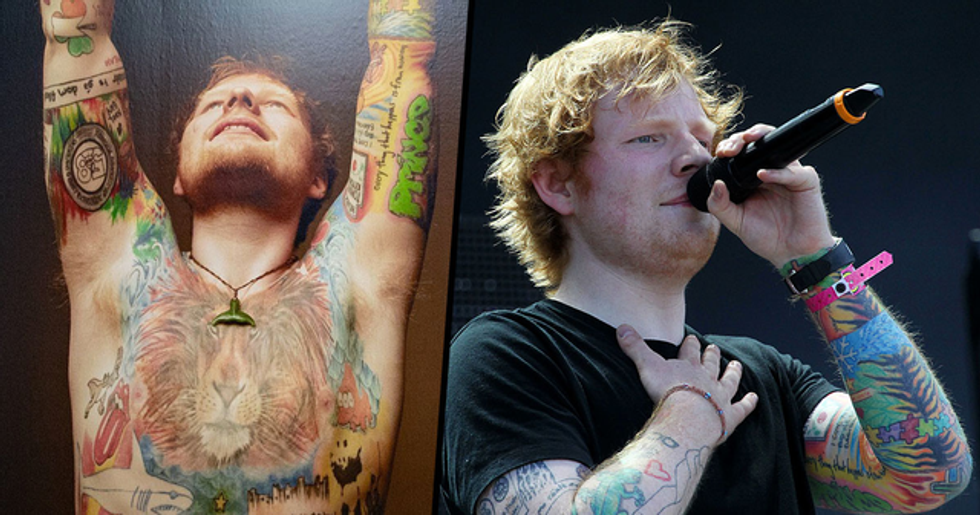 Ed Sheeran is known for lots of things - ginger hair, sweetly sentimental lyrics, and, of course, questionable cameo appearances (Game of Thrones, we're looking at you). But one aspect of Sheeran that's often overlooked is his propensity for questionable ink. From a giant lion in the middle of his chest to that shark, Ed Sheeran's tattoos are pretty... out there - and that's putting it kindly.

Now, Sheeran's tattoo artist has spoken out - and even he's not defending the terrible work. Curious to see more of these cringe-inducing inkings? Keep reading.

Born in Halifax in 1991, he always knew he wanted to make music more than anything else.

As a youngster, he posted music videos of himself online.

One of these videos was discovered by British rapper Example, who was impressed enough to offer Sheeran a support spot on tour.

He quickly rocketed to success.

Sheeran managed to hit number one on the iTunes chart before he was even signed to a record label - and he's only gone from strength to strength since then.

Even if you're not a fan, you'll know his tunes.

His global stardom has seen him release 4 critically acclaimed studio albums as well as collaborating with other music sensations such as Beyonce.

But there's something else Sheeran is known for.

He's absolutely covered with tattoos. And his aren't the normal tatts you tend to see on celebrities, either.

It started as a few here and there.

But now Sheeran is absolutely covered in them - and they're each as weird as the last.

Not only do the tatts seem ill-thought-through and poorly done - but they're also of really bizarre things.

Take this one, for example.

The giant lion on Sheeran's chest seemed so odd that fans originally thought it was a joke.

But (believe it or not) they get worse.

Sheeran also has the logo of Heinz Ketchup on his inner arm. Why?

The effect is undeniably weird.

You can see more of Sheeran's questionable tatts here, including "Ladz on Tour" written on his left shoulder.

He's clearly not afraid of some scrawling.

Sheeran likes to get his favorite lyrics tattooed on in the handwriting of the artist - no matter how aesthetically unappealing that is.

He's not afraid to mix genres.

Look at this ethereal, gothic tree, right next to a cartoon teddy bear. Nice curation.

Not only is the shark out of place, but it also looks as if it was drawn by an actual child.

The colors are always just a little too bright.

Like this one, of beloved British cartoon characters Pingu, who looks to be in hell.

This may be the lowlight.

Not only is this a tattoo of a minor character from an almost twenty-year-old movie - it's also absolutely massive.

And though he tends to go for sentimental value ...

Is that an excuse for such terrible inkings? (This one was done live on TV by John Mayer, just FYI).

This is probably his most overtly bad.

Sheeran wanted "Galway Girl" tattooed on his arm. What he ended up with? "Galway Grill." Nice.

It's safe to say Sheeran is absolutely covered.

And his tattoos have all faced their fair share of online critique (though we can see why).

But hey, if they make people feel better about themselves, perhaps Sheeran has actually done a charitable thing.

This picture is kind of hard to argue with.

Remember guys, it could always be worse.

But the latest criticism of Sheeran's tatts?

Well, it may be the most unexpected of all. The artist responsible for them has now called his own handiwork "****."

Kevin Paul is the artist behind these monstrosities.

He's a widely respected artist, having worked with celebs like Cara Delevingne, Harry Styles, and Rihanna.

But Paul isn't too happy with his handiwork.

But he also stood up for Sheeran.

"Every single thing that he’s got is personal to him. It does look **** but it’s what they wanted, it’s a personal memory and it means something to them."

And Paul claims his work with Sheeran has not helped him out.

"It definitely changed things, I was a big massive artist doing 3D-work and winning multi awards."

"And then all of a sudden you end up doing Pingu the Penguin and ******* gingerbread men on popstars."

"That client base just dies off."

"Everybody just thought I was sh*t but I’m not. I do great realism work, that’s what I won awards for."

One of Paul's tattoos has really taken off.

The V&A Gallery in London, England, now has a Heinz Ketchup bottle based around Sheeran's infamous tatt on display.

And Paul claims he doesn't regret his work.

"I love Ed to bits and he will always be close to me and my kids. I don’t regret anything I have done with him. But yes his tattoos could have been much better but it’s what he wanted done how he wanted them. But he likes them so that’s all that matters," he wrote on Instagram.