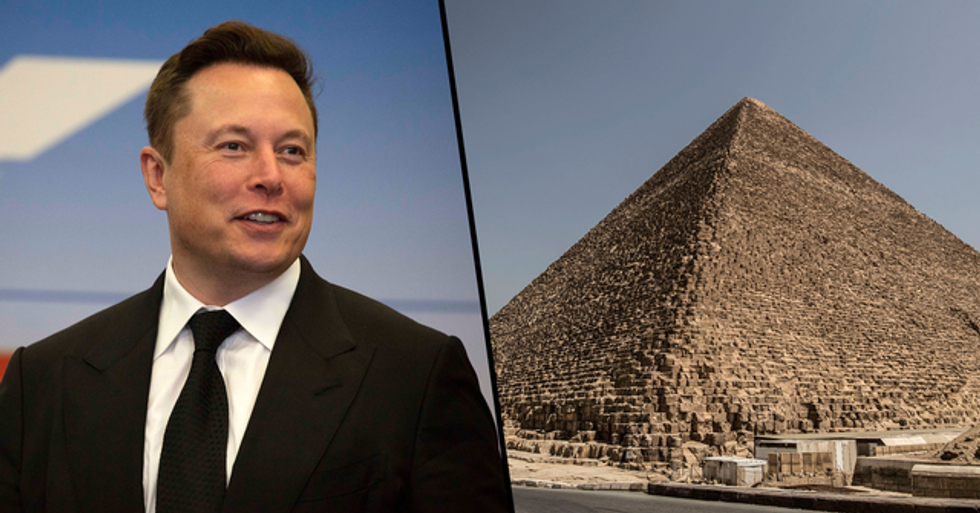 After tweeting that the infamous Pyramids of Giza were built by aliens, Elon Musk has received an unexpected invitation from Egyptian officials...

When is Elon Musk not stirring up the controversy?

The South African entrepreneur is constantly in and out of the headlines but, this week, he managed to offend an entire country with some rather controversial claims.

Now, as most of you will know, Elon Musk is currently one of the wealthiest men in the world.

There's no denying that he is a seriously intelligent man and, even if we don't agree with everything that he says or does, it is undeniable to see that he is paving the path in the world of technology.

But, putting his genius to one side...

It is quite evident that Elon is a pretty unusual character and, as a result, has made for some great online entertainment in the past.

When unveiling Tesla's latest Cyber truck design in November last year, Elon got, for lack of a better word, a bit cocky.

He claimed that the new Tesla Cyber Truck was unbreakable, and he was so confident in the shatterproof design that he asked Tesla design chief, Franz von Holshausen, to throw a rock at the Cybertrucks window.

Because the ball completely shattered the Cybertrucks supposedly shatterproof glass and, well, made Musk look like a bit of an idiot.

As the founder and CEO of Tesla, he received a lot of criticism for the bizarre car design.

But he seemed to immediately bounce back from the Cybertruck disaster...

And, more recently, his personal life caused a stir.

But, when asked what the baby's name is, Musk casually replied with, "X Æ A-12 Musk." And it wasn't a joke.

Obviously, people were in complete disbelief at the name choice.

Anyway, this week, Elon has ruffled feathers on Twitter once more...

And this time, he had his horizons set upon the infamous pyramids of Giza.

Now, Egypt's pyramids have been a historical phenomenon for centuries...

With many speculating just how these colossal structures were erected so long ago... 2550 to 2490 B.C., to be precise.

Well, Elon has the answer.

Apparently. On Friday, he randomly tweeted his support of the old "aliens built the Pyramids" conspiracy theory, and he received a whole lot of backlash as a result.

People weren't impressed with his claims.

Surely, by supporting the alien theory, he is completely disregarding the labor and the efforts of the men who actually did spend years building these historic monuments?

Others even went as far as to tell Elon that he "clearly doesn't know what he's talking about."

@Korriblade @elonmusk You clearly don’t know what your talking about , pyramids where relatively easy to build , si… https://t.co/CdgCLev5xV
— walx (@walx)1596406234.0

Has the entrepreneur taken it too far this time?

Well, since his bizarre Tweet, Egyptian officials have now responded...

And they have personally invited Elon to visit their country in an attempt to educate himself on their history.

"I follow your work with a lot of admiration," Al-Mashat tweeted on Saturday. "I invite you & Space X to explore the writings about how the pyramids were built and also to check out the tombs of the pyramid builders."

Of course, Elon hasn't responded to Al Mashat's invite... Because that would mean admitting he was wrong, wouldn't it?

In doing so, you can educate yourself for once. For times when the Space X founder was right, however, keep scrolling to see how his historic rocket launch left a lot of flat-earthers a little red-faced...