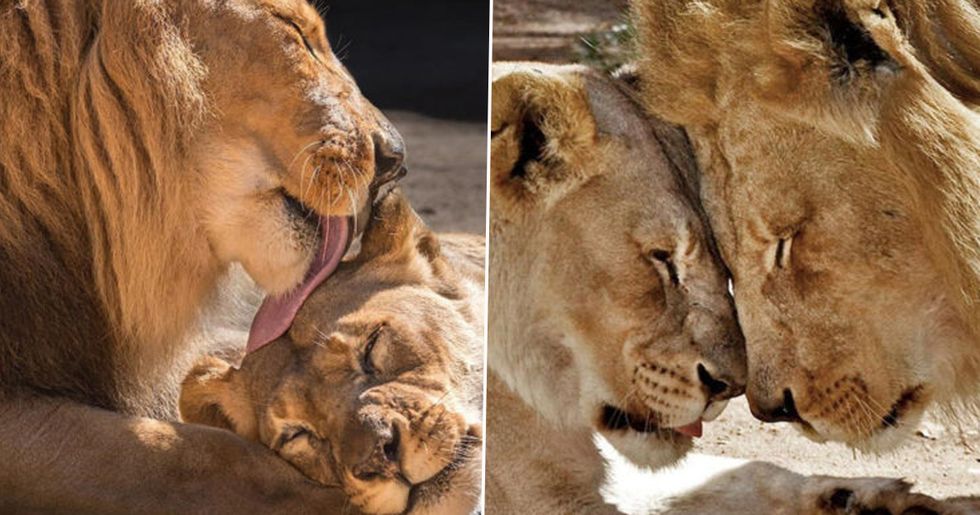 This is the heartbreaking story of how an elderly lion couple were put to sleep at the same time so that neither one of them had to live alone.

The pair were always together at LA Zoo and were one of the top attractions for visitors from across the globe.

But sadly, with their health declining, their time was up and the zoo thought it best to euthanize them both.

Keep scrolling to learn more about the beautiful big cats.

We really don't! And here's just another example why.

This is a heartbreaking story.

Of an elderly lion couple who were a huge attraction at LA Zoo.

They were deeply in love.

And workers at the zoo said that Hubert and Kalisa were definitely soulmates.

It was true love too.

Countless people were blown away by their loyalty to one another.

They were always together.

And many people said the inseparable lovers were never seen away from one another.

But they were getting old.

The average lifespan for lions is between 15 and 17, but Hubert and Kalisa were much older.

And while they lived a long and healthy life, old age was beginning to settle in.

And zoo workers made a heartbreaking discovery.

Both Hubert and Kalisa's health was rapidly declining as was their quality of life, due to their old age.

So they had to make a horrible decision.

They were going to have to euthanize the lions so that they don't die in agony.

They couldn't separate the pair.

Because if one of them was without the other, they would be completely heartbroken and distraught.

So they put them down together.

It was an incredibly tough decision - but they simply couldn't let them live alone.

A spokesperson explained their decision.

These lions were charismatic both together as partners and separately, but they were hardly ever apart from one another.

Their undivided attention was always on the other as they rested together, cuddled and nuzzled often.

These affectionate companions came to the LA Zoo six years ago, and they quickly charmed themselves into our hearts as we observed their magnificent beauty and unique bond.

"It was often said, you don’t see Kalisa without Hubert being close by."

So, while it is truly heart-wrenching that we had to say goodbye to this iconic pair, we can take comfort in knowing they left together. These lions will remain a positive part of our history, and they will be greatly missed.

Verret also said that the lions were an 'iconic part of the zoo' and that countless guests have been 'touched by their companionship'.

Thanking them for their hard work and concluding that the pair 'lived longer than most lions do in human care and in the wild'.

Other workers at the zoo spoke of how hard the loss is to deal with.

Alisa Behar, who works as the zoo’s animal curator, said:

In the early mornings, staff would routinely hear Hubert’s waking roars, and I will personally miss hearing them on my walks around the grounds.

You cannot think of Hubert without thinking of his companion, Kalisa; they’ve been an inseparable couple for years.

It’s always a sad day when iconic animals are euthanized at a crummy zoo. Hubert and Kalisa were always together in… https://t.co/3tzBT66quJ
— Elephant Lovers (@Elephant Lovers)1596211082.0

Our thoughts go out to all those at LA Zoo who are definitely mourning the losses of Hubert and Kalisa.

LA Zoo won't be the same.

But at least they're together still.