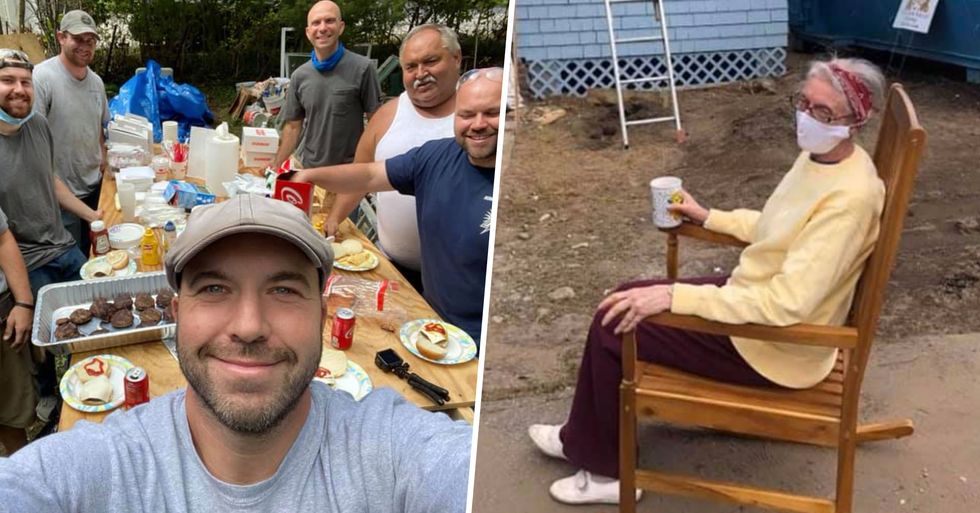 An electrician who came to repair a seventy-two-year-old woman's lights went above and beyond for her when he decided to rally around the entire community to help fix her crumbling house. The pictures are extremely heartwarming and shows us exactly what community spirit is about.

The strength of community spirit is so underrated these days.

Even though everything might seem dark and gloomy given the current circumstances of our country, sometimes we find pockets of hope in the people around us.

A simple "hi, how are you?" to the neighbors can go a long way.

Because knowing that they have your back is probably one of the most comforting things a person can hold onto.

And as the pandemic continues to rage on, there are more and more vulnrable people in our communities.

And they need protection.

But not everyone has a tight-knit community they can depend on...

Or so they think.

Because in times of hardship, there's one thing we're good at...

Putting our differences aside and coming together.

Gloria Scott is a seventy-two-year-old woman who lives in Massachusetts in a crumbling home.

But it was only noticed when John Kinney, an electrician, came by to fix an overhead light that had gone out.

But as the handyman looked around her home, he saw that it went way beyond just a few broken lights.

The entire building was crumbling to the point where he was worried about Gloria's safety, but she couldn't afford to maintain her home in her old age, so she just left it the way it was.

Kinney knew he couldn't just leave her like this...

And a simple repair job became a big-time project with the help of their local community who also wanted to help a neighbor in need.

So that's exactly what they did.

Kinney organized a Facebook group called “Gloria’s Gladiators" in order to help fund the project so that they could fix up all the substantial damage in Gloria's home.

In an interview with CBS, he described his thought process behind it all:

“No lights, running water… I [saw] her on a Friday and it stuck with me over the weekend...I said, ‘I got to go back there.’"

In his opening post in the group, he talked about what he had seen.

"Last week, I met a nice old woman that lives all alone in Woburn. She has no internet or cell phone. When sparks started shooting out of her light fixture, she went to a neighbor, and they gave her my number."

"When I arrived at her house I discovered that the electrical was in very bad shape. Half her lights were out, she had no stove, and her refrigerator was plugged into an extension cord. I fixed her immediate electrical hazards and got her lights and air conditioning on."

And it got worse as he noticed more and more things wrong with her home...

“When all the lights came on, I saw that her ceilings were falling apart, her kitchen sink was broken, and that the place was filthy. She told me that critters often got in the house. The outside was no better. Gutters were falling down and it was surrounded by a jungle."

And then he heartbreakingly revealed: "She has no family, and money is tight."

"I got some volunteers together and we went in there and did a ton of yard work and cleanup. Everyone did an amazing job, and this nice old woman was very grateful. It’s simply just not enough though. She has some serious plumbing issues that need to be corrected. There is extensive drywall repair to be done. A massive amount of painting. Her front porch brick steps are an accident waiting to happen."

And he added this at the very end:

“I’m not looking to rebuild her whole house. I just want to make it safe and livable for her. I have a network of skilled professionals that will donate their time to this cause. I’m looking to raise money for materials. Thank you very much."

Upon hearing his story, everyone wanted him to know that he was greatly appreciated...

Scott was shocked by the response exclaiming, “Look at these people…[You] can’t even comprehend the gratitude that I have."

Watch this heartwarming video of the progress:

If you're in the mood for more related news then keep scrolling to see why a woman rejected a million-dollar offer in order to protect her old home...