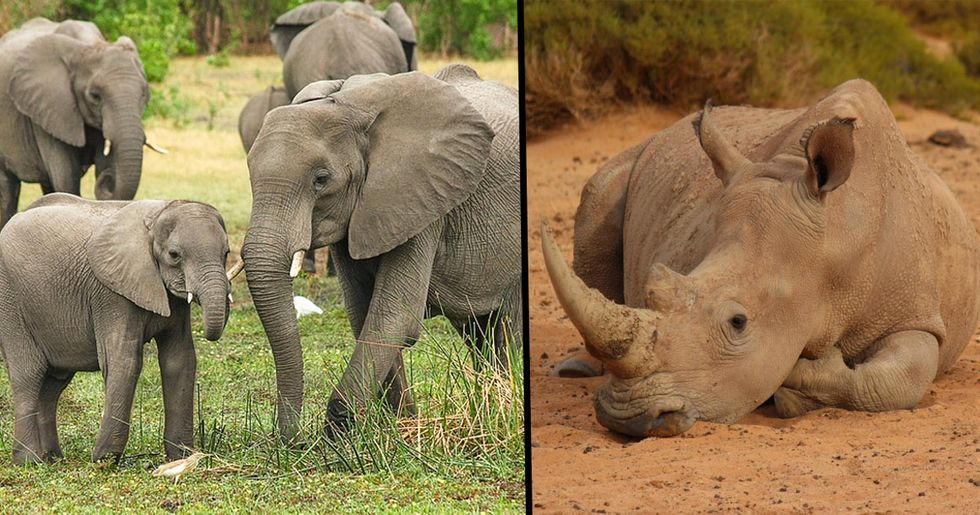 The rhinos and elephants are making a comeback.

Despite being some of the most endangered species in the world, and being globally recognized as the most vulnerable and endangered animals, the population of rhinos and elephants are significantly rising.

It's not a case of rhinos and elephants getting it on more than ever, or of the species coming up with new unprecedented ways of fighting off their predators - it's because people have been told to stop shooting them.

Let's find out what's gone down...

Wildlife poaching in Tanzania has been stopped.

According to The Tanzanian government, in a statement released to Sky News: "As a result of the work of a special task force launched in 2016 to fight wildlife poaching, elephant populations have increased."

Conservation activists have played a significant role in combatting poaching.

The population of Tanzanian elephants had decreased by more than half between 2009 and 2014 largely due to the impact of poaching.

Since the enforcement of the task force launched to fight wildlife poaching in 2016, "elephant populations have increased from 43,330 in 2014 to over 60,000 presently."

What happened to the elephant poachers?

Elephants are typically poached for their ivory tusks. Their meat is also used by poachers, but, more commonly, it's those that desire the animals' tusks and trophy hunting poachers that go after these mammals.

The historic victory against the "Ivory Queen."

One of the ways that the Tanzanian government has cracked down on elephant poaching is by enforcing long jail terms to those caught poaching and smuggling. Earlier this year, the Tanzanian government handed out a fifteen-year jail term to the infamous "Ivory Queen." This notorious Chinese Ivory trafficker was reportedly a "key link" between East-African poachers and ivory buyers in China. Chinese national, Yang Fenlan, was convicted in Dar es Salaam for trafficking 860 tusks between 2000 and 2014, a haul representing the slaughter of dozens of herds of elephants.

Poaching was already illegal in Tanzania.

According to Al Jazeera, poaching networks working within Tanzania had escalated into an industrial-sized scale over the past few decades, which accounts for the necessary actions taken by the government to crackdown on the already illegal practice.

There is still a lot to be done to protect the elephants.

Mark Jones, leader of The Born Free Foundation - an International Wildlife Foundation, spoke to The Independent regarding the rise. He stated: "This sounds like very good news but we should view these figures with caution until there’s independent verification – there’s no way that has occurred through breeding and protection alone...elephants are intelligent — they move across national borders to where they are safer, so if there’s been a clampdown on poaching in Tanzania, it may be that some have moved in."

What about the rhinos?

According to the Tanzanian government, the rhino population was in severely dire straits before the government crack-down in 2016.

Why do rhinos get poached?

Similar to the poaching of elephants for their tusks, rhinos are targetted for their horns. However, the horns are not only prized as a trophy of sorts, they are also ground down to make Chinese medicines.

According to SavetheRhino.org, "rhino horn has been used in Chinese medicine for more than 2,000 years and is used to treat fever, rheumatism, gout, and other disorders."

According to experts, the practice of grinding up rhino horns into a powder for digestion in attempt to relieve patients of anything from cancer to strokes is an expensive, medically unproven, and illegal obsession that has been devastating global pachyderm populations.

How has the Rhino situation improved?

According to Gerson Msigwa, Director of Presidential Communication, Tanzania, the rhino population has increased from a mere fifteen in 2015, to 167 today.

Some are saying that the Tanzanian government mucked up their numbers.

According to the Convention on International Trade in Endangered Species, they documented the rhino population to have been 133 in 2015.

But there has still been a rise in rhino numbers.

Whether there had been only fifteen rhinos in 2015, or 133, the numbers released this year stand at 167. So the rhino population is certainly rising.

We hope that these numbers will continue to rise in Tanzania.

Because, sadly, the same can't be said for the general number of rhinos worldwide. In fact, the numbers of rhinos globally are still decreasing.

The rhino poaching situation in South Africa is at an all-time high.

Elephants face a similar decline in other areas of Africa.

In Kenya, elephant population numbers are rising, the only of four African countries containing elephants to see a… https://t.co/f6FyzBqiW9
— Catty (@Catty)1518580130.0

Tragically, despite the increasing numbers of elephants in Tanzania, it is one of only four African countries to see a rise in numbers.

The wider picture of the endangered elephant situation:

The World Wide Fund for Nature reported in 2014 that, in the early twentieth century, there were an estimated 3-5 million African elephants; by 2014 this was down to around 415,000. That's a terrifying decline.

According to Savetherhino.org, we can hardly say that rhino numbers are on the up throughout Africa... In fact, in the past decade, "more than 8,300 African rhinos have been lost to poaching."

No market, no trade.

We can all do our bit to support the endangered elephants and rhinos. We can donate to organizations such as WWF, Born Free, and Savetherhinos; we can volunteer, we can discourage poachers by not buying ivory products and rhino horns, and, finally, by shaming those that partake in trophy hunting. I know it's not much, but we can all do our bit, eh?