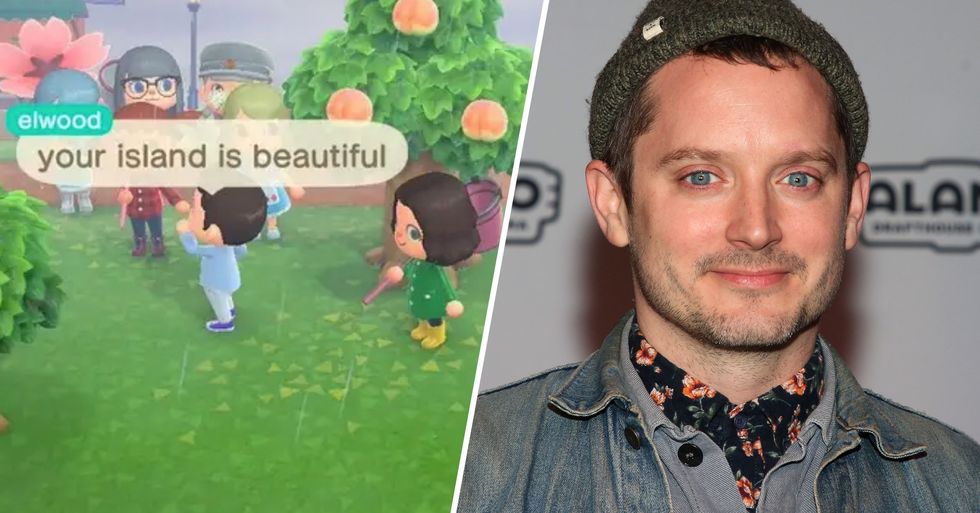 Elijah Wood is known to be one of the nicest guys out there, not to mention an actor, producer and DJ, but his latest antics saw him awarded a new crown by his fans: The Model Animal Crossing Player.

Is there anything this man can't do?

Keep scrolling to see the hilarious reaction from a fan after she found out she was playing the game with a celebrity...

Elijah Wood has had a long and illustrious career.

Born in 1981, Wood started securing small TV roles after attending the International Modeling and Talent Association annual in LA with his mom.

But those little roles were soon swapped out for major movie ones...

Historical drama Avalon saw him take on his first-ever major film and after that premiered, he was considered one of the most "in-demand" child actors out there.

And with a review like that, it's no wonder why he started gaining popularity.

But you may know him best from his role in a J.R.R. Tolkien classic.

Wood's work in The Lord of the Rings trilogy adapted by Peter Jackson saw his career propel to new heights. He played Frodo Baggins tremendously well and received many accolades for his portrayal.

From an Outstanding Achievement in Character Performance...

All the way to a Critics Choice award, Wood was hailed as one hell of a talent in the industry, not to mention an extremely nice guy. You don't get many of those nowadays.

But lately, he's got a new achievement to add to his already long list...

The "model" Animal Crossing player. That's right, and we can't help but love him even more for it.

It's no secret that some of us are bored beyond our minds...

There's only so much you can binge-watch, am I right? While we’re all stuck indoors for the next few weeks, or months depending on how well this whole social distancing thing goes, we’re all looking for something to keep us pre-occupied.

And Wood also feels that same pain, so he decided to hop onto the latest trend that is Animal Crossing: New Horizons.

It's been a few months since Nintendo Switch unveiled the game, so fans could distract themselves from what was going on in the real world by entering a virtual one.

And even though things didn't quite go to plan at first because of PETA...

Who else remembers when they claimed that we should all refrain from playing Animal Crossing because it wasn't vegan?

They even went as far as publishing a whole blog post about it!

In the document, they outlined every single instance that made this game a danger to society, but thankfully, people ended up shunning the organization instead.

And it has only been onwards and upwards since then.

The game has drastically increased in popularity as the latest version consists of new activities, new characters and new worlds.

Recently, Wood decided to embark on an adventure of his own...

elijah wood dming jessica for her dodo code is the most legendary moment in stan twitter history
— ᴋʟᴀᴜᴅɪᴀ (@ᴋʟᴀᴜᴅɪᴀ)1587659118.0

In the game, of course. He went to visit someone else's island in the hopes to sell some turnips.

For those of you that don't understand the importance of turnips...

If you're looking to be business savvy on your island, you'll know how to sell your produce correctly.

But the only way to do that is to buy them off of Daisy Mae.

The thing about Daisy Mae is that she only turns up on a Sunday morning and hangs about until noon. So if you're not quick enough to find her, you won't have any turnips to sell.

And with the vegetable going at such high prices, you need them to rake in that bell...

But you must also remember that you can't just sell the turnips anywhere. Some of the shops don't even take them, so connecting with other islands is the best way to go about things...

But when Jessica posted on Twitter that her shop was, in fact, buying turnips, she wasn't expecting this DM.

The trick is to sell your turnips for anything over 400 bells, so when Jessica's island shop was buying them for 599 bells, Elijah Wood could not help himself, asking to come over.

She described the experience to Buzzfeed saying:

"I freaked out! I couldn't believe my eyes. I thought it was such a random, sincere gesture. I couldn't believe it until he was really on my island and still responding to me." Jessica also said she's a fan, so "it made the surprise even better."

And when he visited her island, he also met some of her virtual friends...

"We were in a group chat at the time and couldn't believe it. We felt so foolish following him around, frolicking my island, and hitting one another with nets." Classic.

Wood stayed around for a while, just chilling with the gang.

At one point, he even asked her if it was alright to pick some of her fruit to take back with him and of course, she agreed. After a discussion about Star Wars: The Last Jedi, it was time to call it a day.

"I thanked him again for visiting, and he was equally thankful that I let him sell his turnips."

Before he left, he even told her that her island was "beautiful." What an absolute gentleman! If you want to read about more celebrity interactions with their fans, then keep scrolling.