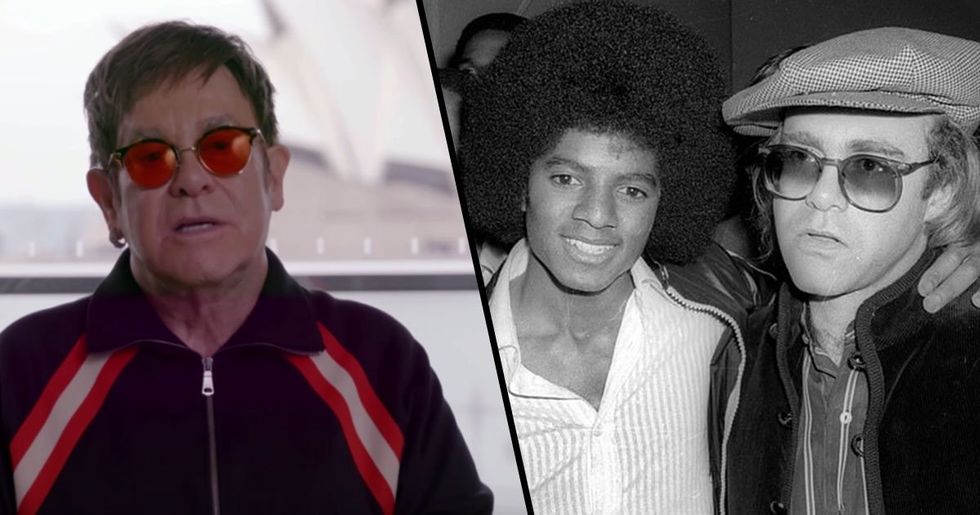 HBO's documentary, Leaving Neverland, takes a deep dive into the sordid legacy of Michael Jackson. It focuses on two of Jackson's alleged sexual abuse victims: Wade Robson and James Safechuck. And since all the controversies emerged, people have had mixed feelings on the issue.

Some choose to defend the legendary singer, while others have moved to criticize him for using his power to exploit his fans.

And now, Sir Elton John has spoken out about Jackson, describing him as "mentally ill" amongst various other things in his new memoir, Me, which is out today. Keep reading to find out all the details surrounding this controversial story.

Let's start with the facts.

Leaving Neverland follows the stories of Robson and Safechuck at ages 7 and 10. The men say they were abused by Jackson.

The boys definitely did spend time as children with Jackson.

But while they did not make any allegations during Jackson's life, after his death they came forward with claims that he molested them.

The story starts with the boys being starstruck over the legend.

But it follows them through the realization that their relationship with him was inappropriate. While both Robson and Safechuck have spoken about their experiences, they say that the documentary tells more about how the abuse happened, especially over such a long time.

Jackson's estate has been very clear about their perspective.

“This is yet another lurid production in an outrageous and pathetic attempt to exploit and cash in on Michael Jackson," the estate said. “This so-called ‘documentary’ is just another rehash of dated and discredited allegations."

But the victim's attorney says differently.

“Them telling their stories is not about getting attention for themselves. When someone is sexually abused as a child, especially by such a prominent figure, it changes the course of their lives."

There has been a constant debate on this issue.

Some people still believe he was a musical genius, so they're giving him a pass for his behavior but others, including me, have canceled the so-called "legend."

However, no matter where you stand, the film shows the complexity of a confusing relationship.

An adult superstar spending time with kids is never going to be a simple thing to understand but from a sane person's point of view, it already sounds very problematic. People in positions of power have been known to take advantage of those they consider "naive."

And no one is more naive than a child.

So, this is the main reason why people are rightfully speaking out against the singer.

The most recent addition to that crowd is none other than Elton John.

Sir Elton John has described Jackson as "mentally ill," saying he was "disturbing to be around."

His thoughts on the late star were voiced openly in his new memoir, Me.

The British singer developed a friendship with Jackson early on in his career as the two had been pictured together many times.

However, he quickly changed his mind on the mental well-being of his new friend.

"I’d known Michael since he was 13 or 14. He was just the most adorable kid you could imagine."

He then compares Jackson to Elvis Presley.

"But at some point in the intervening years, he started sequestering himself away from the world, and away from reality the way Elvis Presley did."

"I don’t mean that in a light-hearted way."

"God knows what was going on in his head, and God knows what prescription drugs he was being pumped full of, but every time I saw him in his later years I came away thinking the poor guy had totally lost his marbles."

The seventy-two-year-old continued to voice his concerns...

He also mentioned how in the following years he found it hard to sit with Jackson, so he avoided it. Even when the late singer invited him to dinner, he declined.

Hardcore MJ fans have taken to Twitter to attack John for his comments.

But what people to fail to realize is that this man has actually spent time with Jackson, as opposed to just idolizing him from a distance. There's a different vibe that you get from people when you know them, and are friends with them. Plus, John has nothing to gain from relaying this information, so no one can accuse him of that like they did with the victims.

Fans pulled out the low blows in their responses.

So Elton John rambles on in his book slandering Michael Jackson, yet he is an admittedly former user of cocaine. Bu… https://t.co/ZZ5pw52nax
— Blues Away (@Blues Away)1570880045.0

A lot of them were very upset at John's comments.

Some people even went as far as accusing John of being jealous?

A lot of fans' judgement is clouded by their love for their idol.

It is hard to believe...

But people are also accusing him of trying to "sell books."

As much as I want to believe Jackson is innocent... I don't.

There's enough evidence against him and there also seems to be a distinct pattern in the way "legends" have exploited their fans...cough, R Kelly, cough, Harvey Weinstein.

We need to think about this with empathy for the victims.

Just because you made "good music," doesn't excuse your abusive behaviour, does it? How does that even make sense? If it were your child in that position, would you still stand on that side of the argument? Ask yourself that.