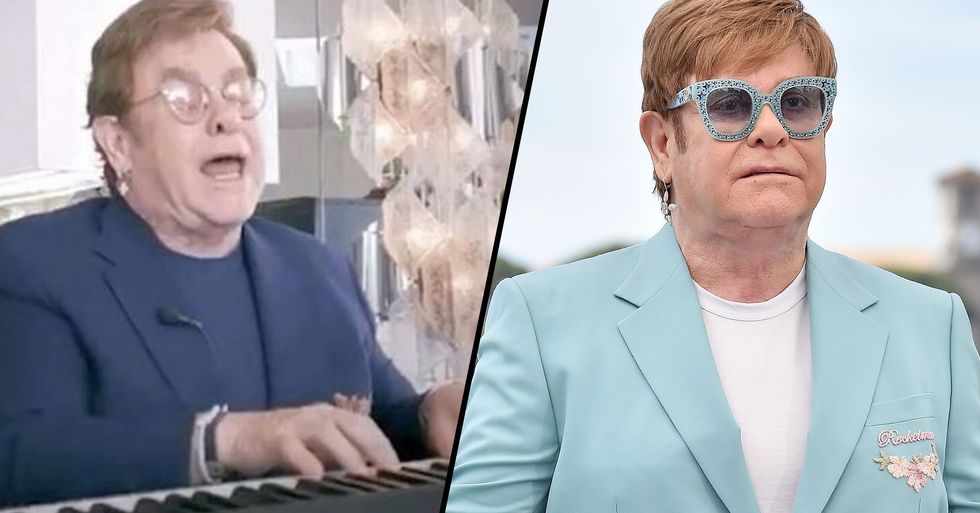 The real-life Rocketman, Elton John, has yet again sparked concerns as he was left "unable to speak" and was slurring his words during a recent live stream concert.

But firstly, let's speak a bit more about the Rocketman star.

Elton John is a legend...

And that's why a movie was made about him... but not everything in the movie was accurate.

Let's start with the music...

Elton John's discography is at the core of Rocketman and is used as a narrative device to tell the story of Elton's life. But not everything was as accurate as it seemed in the successful biopic.

Let's start with the "I Want Love" singalong...

In the movie, we see Elton, or Reggie Dwight, as he was known as a boy, forlorn and lonely, but this loneliness isn't isolated to young Reggie and it appears to be a collective feeling amongst his family. Expressing their feelings through a group rendition of "I Want Love," we watch the Dwight family sharing verses of the Elton John hit.

The Dwight family did, in fact, have a group sing-along...

But, funnily enough, they did not sing "I Want Love"; a song that came out in 2001, forty-five years after they claim that it was sung in the movie.

According to Variety, it was actually the Mann hit that the Dwight's forlornly sang together.

Elton has defended the decision to use "I Want Love" in the movie.

Speaking to The Sun, Elton said: "'I Want Love' is a song Bernie wrote, I think, about himself: A middle-aged man with a few divorces wondering if he is ever going to fall in love again but it fitted life in Pinner Hill Road perfectly".

In the movie, we see Elton performing at The Troubadour for the first time. It is undoubtedly his performance of "Crocodile Rock" that turned heads on the set and suggests that the number played a significant role in sparking American interest in the singer.

But hang on one minute, when was "Crocodile Rock" released?

In reality, Elton did not write or release "Crocodile Rock" for another three and a half years.

At the end of the movie (sorry... spoilers!), Elton performs "I'm Still Standing". The narrative suggests that this classic Elton John song was written post-rehab and only after a visit from Elton's John's long term friend, Bernie Taupin, who encourages him to get back onto the writing saddle.

Believe me, I wish it was true.

Sadly, as much as we'd all like to believe that this uplifting number was written whilst Elton was clean, it's simply not true.

This was years before Elton got clean and can't really be attributed to the narrative of his re-birth, as the movie suggests.

The meaning behind music evolves and changes over time...

In defense of the musical reshuffling in Rocketman, I'd argue that Elton's songs have grown truer, more profound meanings as his life and career moved forward.

There is so much more to the star than just his music.

Elton is pretty well known for having an eclectic mix of famous friends...

And even though many of his famous friends, including Princess Diana and George Michael didn't make the cut in the movie... they most certainly did in real life.

At the end of the day, Rocketman is about Elton and his jam-packed life, not his celebrity friends.

Which explains why there is no mention of George Michael, Freddie Mercury, Giovani Vercase, Diana, or Rod Stewart. Fair enough, right?

Including his drug and alcohol battles... which, by the way, he has now battled and has been now living over twenty-five years sober.

But all isn't well for the pop veteran right now.

Zooming back to reality...

Elton is now seventy-three-years-old and it's easy to see that his chaotic lifestyle as a younger man has certainly caught up on him. For example, he performed in Auckland, New Zealand, earlier this year and the star sang for around 2 hours before revealing that his voice had completely gone.

He had "Walking Pneumonia."

The seventy-three-year-old went on to let fans know that he had been diagnosed with Walking Pneumonia, which is caused by bacteria that affects the lower and upper respiratory tract.

He was trying to sing "Daniel."

But he had to give up and admit defeat. He said, "I've just completely lost my voice. I can't sing. I've got to go. I'm sorry. I'm so sorry."

He then burst into tears...

Which was completely heartbreaking to watch.

Elton performed his first live performance since the ordeal in Auckland recently...

Via a live stream, of course! In classic Elton John fashion, he took part in a musical fundraiser to raise money for the global pandemic.

He performed "I'm Still Standing" from his back yard...

But immediately, Elton can be heard slurring a lot of words and after the performance, he was unable to speak.

But the performance was very uncomfortable to watch, and Elton seemed to be losing his voice more and more as the song went on.

Fans most certainly noticed his condition...

And it's safe to say that something just wasn't quite right about the singer.

But as this one fan pointed out to those leaving cruel comments...

Elton has been touring for decades now, through addictions and illnesses - that is enough for anybody to strain their voice slightly. Maybe it is time for him to retire...

We hope you get better soon, Elton! Keep scrolling to learn about the star's plans to organize a pandemic benefit concert...