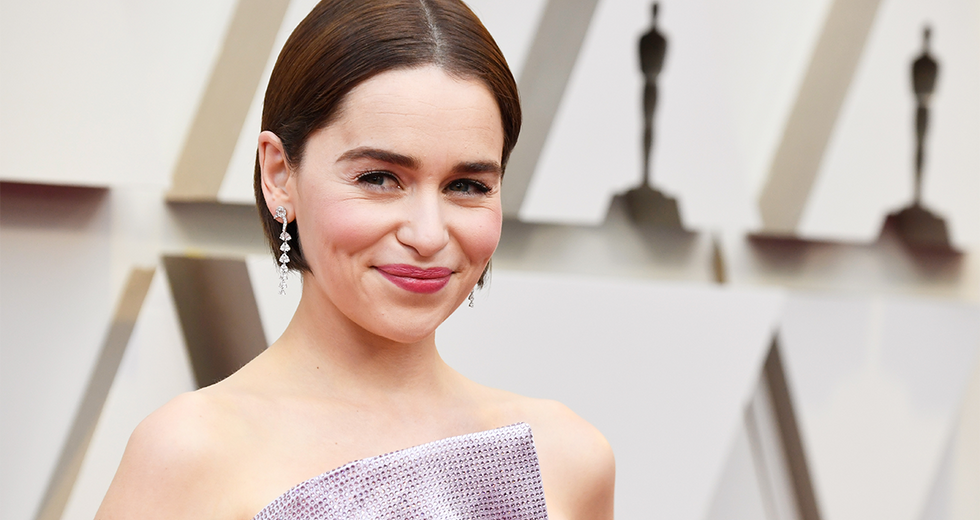 Emilia Clarke, the actress who plays Khaleesi on HBO's mega-hit Game of Thrones, revealed today in a poignant article for The New Yorker that she suffered not one but two major brain aneurysms while filming the show. Both almost cost her her life.

She begins her story, "It was the beginning of 2011. I had just finished filming the first season of Game of Thrones, a new HBO series based on George R. R. Martin’s A Song of Ice and Fire novels..."

Clarke was given the role of Khaleesi with almost no prior acting experience.

She immediately skyrocketed to stardom, almost overnight. Was she excited about it? She writes, "I was terrified. Terrified of the attention, terrified of a business I barely understood, terrified of trying to make good on the faith that the creators of Thrones had put in me. I felt, in every way, exposed."

Of course, the press was obsessed with the show's frequent nude scenes.

She continues, "In the very first episode, I appeared naked, and, from that first press junket onward, I always got the same question: some variation of 'You play such a strong woman, and yet you take off your clothes. Why?" In my head, I’d respond, “How many men do I need to kill to prove myself?'"

To get in shape for the role, Clarke worked out with a trainer.

One morning as she was getting ready at her gym in London, before a morning training session, a bad headache started to creep in. What happened next was truly terrifying.

She instantly knew something was very very wrong.

She explains, "Then my trainer had me get into the plank position, and I immediately felt as though an elastic band was squeezing my brain. I tried to ignore the pain and push through it, but I just couldn’t. I told my trainer I had to take a break. Somehow, almost crawling, I made it to the locker room."

This wasn't regular post-workout pain. This was something else entirely.

She describes what happened next with unflinching honesty and vulnerability. "I reached the toilet, sank to my knees, and proceeded to be violently, voluminously ill. Meanwhile, the pain—shooting, stabbing, constricting pain—was getting worse. At some level, I knew what was happening: my brain was damaged."

Clarke, exhausted and lying in a bathroom stall of her gym, tried to think of what to do next.

First, she attempted to wiggle her fingers and toes to ensure she wasn't paralyzed. Next, she tried to recall lines from the show to see if her memory was still working. Then, thankfully, a kind woman from the next stall over came in to help and from there, according to the actress, "everything became, at once, noisy and blurry. I remember the sound of a siren, an ambulance; I heard new voices, someone saying that my pulse was weak. I was throwing up bile. Someone found my phone and called my parents, who live in Oxfordshire, and they were told to meet me at the emergency room of Whittington Hospital." But still, no one had answers about what had happened to her...

Soon after, she got her answer. And it was life-changing.

"Finally, I was sent for an MRI, a brain scan. The diagnosis was quick and ominous: a subarachnoid hemorrhage (SAH), a life-threatening type of stroke, caused by bleeding into the space surrounding the brain. I’d had an aneurysm, an arterial rupture."

Those who don't are rushed into surgery — a terrifying, risky procedure that isn't guaranteed to work — which is what happened next. It's easy to think Clarke was a self-sufficient, ass-kicking adult woman, but she reminds us that she was only 24 years old when this happened.

Clarke details the surgery and its difficult, painful aftermath.

"The operation lasted three hours. When I woke, the pain was unbearable. I had no idea where I was. My field of vision was constricted. There was a tube down my throat and I was parched and nauseated. They moved me out of the I.C.U. after four days and told me that the great hurdle was to make it to the two-week mark. If I made it that long with minimal complications, my chances of a good recovery were high."

She still wasn't out of the woods.

After a few nights of recovery, a nurse asked: "what is your name?" It's a routine question asked of those who have undergone brain surgery to check their memory, but Clarke suddenly couldn't remember. "Instead, nonsense words tumbled out of my mouth and I went into a blind panic. I’d never experienced fear like that—a sense of doom closing in. I could see my life ahead, and it wasn’t worth living. I am an actor; I need to remember my lines. Now I couldn’t recall my name." A terrifying prospect, to say the least.

She was suffering from something called "aphasia," a condition that occurs after brain trauma.

"In my worst moments, I wanted to pull the plug. I asked the medical staff to let me die. My job—my entire dream of what my life would be—centered on language, on communication. Without that, I was lost."

Eventually, she recovered, the aphasia receded, and things started to improve.

She was due back on the Game of Thrones set. And that's when doctors told her she had "a smaller aneurysm on the other side of my brain, and it could 'pop' at any time."

She had no choice but to go back to work, even with the knowledge that her brain could malfunction and instantly kill her at any moment.

Through the publicity tour and shooting the next season of Game of Thrones, Clarke said she was exhausted. More than exhausted. She was completely depleted and had to "sip morphine" between interviews. Every night after filming, she would collapse into bed, unsure she would be able to rise and work the next day. Soon after, doctors recommended she take care of that other, smaller aneurysm. They planned an operation, but things went horribly, horribly wrong...

"When they woke me, I was screaming in pain. The procedure had failed. I had a massive bleed and the doctors made it plain that my chances of surviving were precarious if they didn’t operate again. This time they needed to access my brain in the old-fashioned way—through my skull. And the operation had to happen immediately." Bits of her skull had to be covered in titanium, and after the surgery, she had drains coming from the sides of her head to relieve pressure. She was terrified she'd never act again.

Again, slowly but surely, with the determination of the Mother of Dragons, Clarke recovered. She survived.

And she chose now to tell her story to let the people know they are not alone if they suffer from terrible traumas. She closes out the piece with a gorgeous gem of inspiration: "I’m so happy to be here to see the end of this story and the beginning of whatever comes next." Will you be watching Khaleesi conquer the world in the next and final season of Game of Thrones?