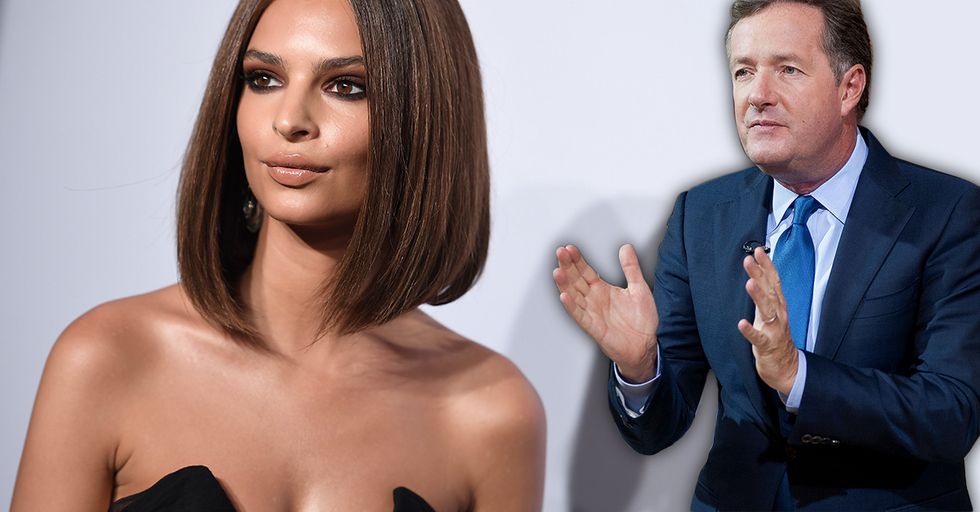 On March 20, 2013, a music video blasted onto Youtube that would quickly become the flashpoint in a cultural controversy over sexually suggestive lyrics in contemporary pop music. It was called "Blurred Lines," and it featured such eyebrow raising lyrics as, "I hate these blurred lines/ I know you want it/ But you're a good girl," which had one journalist from the Daily Beast calling the song "rapey" and student unions in universities banning the song.

But apart from the lyrics, why was the video so controversial?

Well, it featured a trio of scantily clad models prancing around singer Robin Thicke, producer Pharrell Williams, and rapper T.I. in a way that can only be described as provocative, while the three men crooned chauvinistic sweet nothings into their ears and made suggestive gestures.

Oh, and it featured Emily Ratajkowski.

If you haven't heard of, or seen Ratajkowksi – more commonly known as EmRata (since her name is, understandably, quite difficult to stumble through) – one thing you should know is that she considers herself a feminist.

Ratajkowski has continually burnished her feminist bone fides and is a staunch advocate for body positivity, female sexuality, and female autonomy.

That is why she is a staunch supporter of Planned Parenthood, and why she is constantly interviewed about her thoughts regarding feminism and the female body in her off time from modeling and making memorable appearances on films such as Gone Girl.

In fact, Vogue even did an article called "All the Times Emily Ratajkowski Fought the Patriarchy."

It has such juicy tidbits of feminist sticking-it-to-the-man as "I refuse to live in this world of shame and silent apologies."

The young model and actress further opined "My response to people saying I post oversexualized images is that it’s my choice and there’s an ownership and empowerment through them."

She wasn't done though. "When I take nude photographs," she said, "I’m not there for the boys. It’s about owning my sexuality and celebrating it. And it’s my choice and there has to be room for that in our culture and in our world." Ratajkowski is, as we've previously noted, a staunch advocated of body positivity.

In fact, she had this to say of the "Blurred Lines" video - "I'm glad that people are criticising pop lyrics, because I think that's an important thing to do."

But she also had this opinion, which she expressed to the L.A. Times:

We took something that on paper sounded really sexist and misogynistic and made it more interesting, which is why women love that video and why it became a viral success. There's an attitude and energy there that goes beyond girls shaking their ass around suited men — a confidence that I think is refreshing. We don't have any images of nude women other than in really beautiful magazines shot by great photographers that aren't overly sexualized. And I think that "Blurred Lines" wasn't overly sexualized, and that's what made it interesting.

Still, we have to call B.S. on this, and indeed, the rest of Ratajkowski's proclamations. Our word of the day is casuistry, which means "the use of clever but unsound reasoning, especially in relation to moral questions," and that was exactly the type of reasoning Ratajkowski used to great effect with her quote about the feminism of "Blurred Lines".

Yes, Ratajkowski's dedication to carving out her own sexuality in the face of patriarchy is quite feminist.

There is, however, a limitation to her feminism. Ratajkowski is thin, white, and abled. She has money and went to UCLA, a very reputable institution by any metric of academic excellence. All this becomes questionable when you consider that while she continuously harps on sexuality – particularly her own sexuality – she is quite silent when it comes to other issues.

By other issues, we mean issues that affect those not as thin, abled, white, and well off as Ratajkowski.

No one expects Ratajkowski to miraculously turn into Sojourner Truth, or some other such bastion of intersectional feminism, but all this is notable when you consider all the times Ratajkowski has proudly proclaimed her feminism.

In this way, Ratajkowski is the classic definition of what has come to be pejoratively known as "white feminism," or "feminism centered around the ideals and struggles of primarily white women," as per Urban Dictionary.

Urban Dictionary further states, "While not outright exclusive, [white feminism's] failure to consider other women and its preoccupation with Western standards and the problems faced by the "average woman" is often alienating to women of color, non-straight women, trans women, and women belonging to religious or cultural minorities."

Ratajkowski's feminism is a limited sort of feminism that only speaks to the most privileged subsection of women. It is the feminism of the Taylor Swifts and the Miley Cyruses, and other women of that ilk.

It is the sort of feminism most regular women across America cannot access. This may be why there didn't seem to be much pity for Ratajkowski when she engaged in her latest Twitter dustup with a noted foe, Piers Morgan.

Former CNN host Piers Morgan is the type of guy who likes to offer his opinion on everything.

Would Susan Sarandon wear this to a funeral? No. It was thus horribly inappropriate for an In Memoriam tribute. https://t.co/hMoGChJY8D
— Piers Morgan (@Piers Morgan)1454506708.0

Unfortunately, however, his opinion often sucks – usually because it's tinged with a thin veneer of misogyny, racism, or transphobia, all couched in a posh British accent. Of Susan Sarandon showing her cleavage during an awards show, he opined, "Would Susan Sarandon wear this to a funeral? No. It was thus horribly inappropriate for an In Memoriam tribute." When noted trans activist Janet Mock was due to appear on his show, he tweeted, "How would you feel if you found out the woman you are dating was formerly a man? @JanetMock shares her experience now. #RedefiningRealness." Basically, Piers Morgan is a bit of a tool – one who, it should be added, seems to have a thing for Ratajkowski.

In 2016, Ratajkowski did an interview with Harpers Bazaar, during which she had a photoshoot nude and riding on a horse.

It was meant to be an homage to Lady Godiva, but all Morgan (predictably) could see was boobs. In a tweet that managed to be both misogynistic and leering in a skeevy dirty old man way, Morgan asked, "Do you want me to buy you some clothes? You look freezing."

To this, she responded, "thanks, but I don't need clothes as much as you need press."

This week, the feud between the two reached another height when Ratajkowski did a shoot for a food-themed shoot for Love magazine, during which she covered herself in spaghetti and meatballs.

The sight of all this feminist salaciousness must have inflamed Morgan's delicate sensibilities, because he quickly took to Twitter to air his grievances.

By Emmeline Pankhurst, he means the British suffragette who "founded the Women's Franchise League, which fought to allow married women to vote in local elections."

Personally, we would have suggested he invoke the name of Sojourner Truth, Gloria Steinem, Ida B. Wells – you know, good old fashioned American feminists, but then again, Morgan is British.

Ratajkowski, true to form, was quick with the clapback. "Lol never said my love video was a feminist statement," Ratajkowski tweeted. "But now it’s worth saying that telling women what to do with their bodies & sexuality is actually just classic sexism. I can have opinions about feminism & also do sexy photo shoots k thanks." Good job, EmRata. Now just add some intersectionality to your feminism, and you're set.