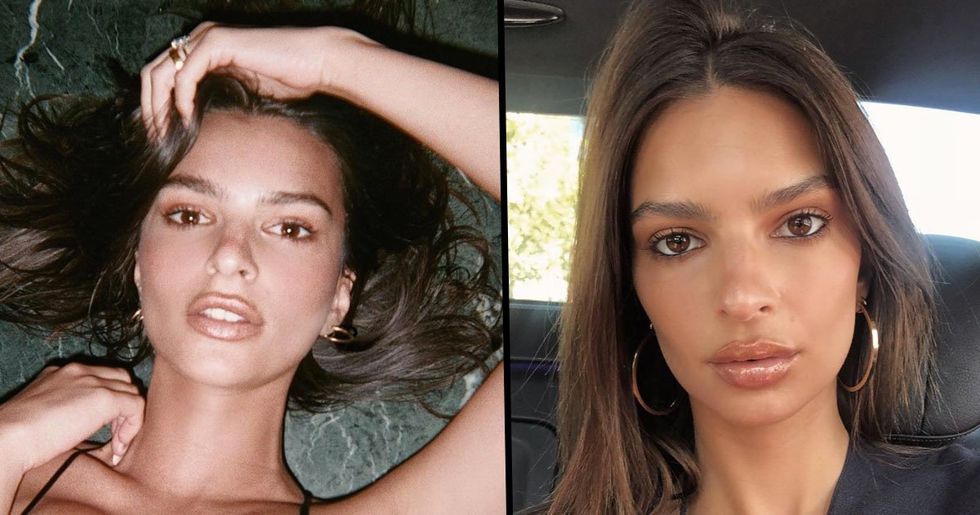 Supermodel and actress, Emily Ratajkowski, has never shied away from making a statement. Aside from her glowing modeling and acting career, she is also a huge champion for feminism and hasn't ever been afraid to make this side of her known (remember when she completely obliterated Piers Morgan?).

While she's usually appearing in glossy print with polished looks and pristine, well, clean-shaven skin, the model has now taken a refreshing approach to the beauty ideals that typically come with fronting a high-profile magazine.

The star has penned an essay for Harpers Bazaar's September issue in which she opens up about her identity and feminism, and, true to the theme of the piece - appeared on the cover donning armpit hair.

Keep scrolling to find out what made her take the plunge, hair-and-all, and why some people have noticed something strange about the shot.

Emily Ratajkowski is a world-famous supermodel and actress.

The twenty-eight-year-old has a pretty impressive resume, posing for the likes of Allure, Vogue, Marie Claire, and LOVE, to name a few.

Although you may remember her from this famous music video.

Yep, she starred in the 2013 music video for Robin Thicke's "Blurred Lines." The gig bagged the model her big break and cemented her as the latest sex symbol of the celeb-o-sphere.

And any iCarly fans out there will probably recognize her, too.

Now, this is some serious nostalgia. The model has had a successful stab at acting, landing a recurring role as Gibby's girlfriend in Nickelodeon's iCarly.

She may have only been in 2 episodes, but the internet went into meltdown when the realization hit.

emily ratajkowski was gibby’s girlfriend in icarly n idk how to process it https://t.co/PzY6SVyfMT
— nicholi (@nicholi)1557406997.0

The then-eighteen-year-old is barely recognizable. Which is probably why we'd all forgotten that it was her. Anyway, moving on...

Remember Ben Affleck's mistress in the thriller? Well, that was Ratajkowski too.

But, in recent years, she's really put her all into modeling.

After taking the modeling world by storm, she has quickly gone from "that girl from the blurred lines video" to an international star. Her gleaming portfolio includes the likes of some of the biggest publications and designers in the industry, making her one of the most-talked-about names in fashion.

Although it hasn't been an easy ride.

In 2017, the star said she struggled to get breaking into the industry because her body didn't fit the typical mould of a model. What? Ratajkowski admitted that her body was deemed too "sexy" to work with, due to the size of her boobs. "There’s this thing that happens to me: ‘Oh, she’s too sexy.’ It’s like an anti-woman thing, people don’t want to work with me because my boobs are too big."

However, now, she's pretty much living her best life.

Between runway shows and glossy print gigs, the star regularly posts shots of herself Instagram, and you have to admit that, objectively, she does look gorgeous.

But, aside from being a model and an actress, Ratajkowski is also a self-proclaimed feminist.

Since breaking out into the industry, the star has been using her platform to speak out about the unprecedented policing of women's bodies.

She has a very strong stance on the subject.

Considering the fact that she's a model, she often poses for revealing shots, which people tend to slam her for because you apparently can't show a bit of skin and be a feminist at the same time. But the model believes otherwise - that no one should be able to dictate what a woman wears.

She's even been arrested for speaking out for what she believes in.

The star isn't afraid to shy away from controversy, and politics is no exception. Last year, she was among the three-hundred people who took to the streets to protest the Supreme Court nomination of Brett Kavanaugh, a man who was accused of sexually assaulting university professor, Christine Blasey, in 1982. “I demand a government that acknowledges, respects and supports women as much as it does men," the model wrote on her Instagram.

But the star came under fire for what she wore to the protest.

Ridiculously, instead of focusing on the important reason for the protest, people decided to focus on what the model was wearing, instead. Critics began trolling her for not wearing a bra to the protest, arguing that going braless, wearing a tank top, took away from her political motivations.

Which brings us back to the original point that Ratajkowski made.

Whatever she chooses to dress herself in should be completely irrelevant.

She's also a huge advocate for the #MeToo movement.

After the Harvey Weinstein scandal broke, the model took to Twitter to express how "tired" she is of having to worry about what men will think if she wears a short skirt. “I’m tired of having to consider how I might be perceived by men if I wear the short skirt or post a sexy Instagram. I want to do what I want to do. Feminism isn’t about adjusting, it’s about freedom and choice."

And for women's right to choose if they want an abortion.

The star has been very vocal that she believes in the right to choose. So much so, that earlier this year, she posed nude as a stand against the controversial Alabama abortion law. Her message was simple, "My body, my choice."

But there's one critic who has never understood the star's "feminism."

You've probably already guessed who it is... the one and only Piers Morgan. Are we surprised? No, not really. The journalist has regularly called out Ratajkowski for wearing little clothes on photoshoots, or, as he likes to call it, "stripping, in the name of money."

But the model always claps back in the best way.

She continually stresses that she can wear as many, or as little, clothes as she wants and still be a feminist. It's honestly quite sad that she has to constantly defend herself.

Despite the critics, the star is continuing to champion feminism, something her latest move is proving.

The star is featured on the Septemeber issue of Harpers Bazaar, in which she's penned an essay surrounding all things identity and feminism for.

Oh, and she also sported her natural armpit hair on the cover shot.

Why you ask? Because she can. “For me, body hair is another opportunity for women to exercise their ability to choose.... On any given day, I tend to like to shave, but sometimes letting my body hair grow out is what makes me feel sexy," she wrote.

She started off her candid essay by acknowledging her privilege.

"Before I go any further, let’s state the obvious: I’m a cis white woman. I’m well aware of the privilege I receive as someone who is heteronormative, and I don’t pretend to act like my identity hasn’t made some things easier for me." Despite recognizing her privilege (which is obviously important), the model wrote that she still wanted to speak out about her experience as a woman.

Recounting an experience with a friend, she writes that she was left feeling "self-conscious" by being labeled as "hyper femme."

"Two summers ago, while vacationing with my friend and her girlfriend, my friend made an offhand remark about me being 'hyper femme.' It kind of threw me because in many ways, probably like anyone would, I felt that her comment was an oversimplification of my identity. "In my day-to-day life, I was not aware of being femme or masc or anything but just me. Her observation surprised me and made me feel suddenly self-conscious."

Although she later realized that, occasionally, being "hyper-feminine" made her feel powerful.

“I feel powerful when I’m feeling myself, and sometimes feeling myself means wearing a miniskirt. Sometimes it means wearing a giant hoodie and sweats." And in reference to all of the backlash from the protest last year, she summed up her essay saying: "Sometimes I feel particularly strong and free when I don’t wear a bra under a tank top. That’s just me, in that moment."

The star probably expected some backlash from the shot, but some people are going as far as to say it's fake.

Like this user, who seemed pretty adamant that the armpit conspiracy was true. To be fair, just because the star is clean-shaven now, it doesn't necessarily mean that the hair was fake on the day of the shoot.

But, of course, people did praise the star for the feminist statement.

People thought that the star's message was powerful and many people are slamming the star because they are "scared" of a  powerful woman who embraces her sexuality.

We're sure that this isn't the last that we'll hear from the model when it comes to feminism.

And we'll definitely await Piers Morgan's inevitable tweet about her latest move. Speaking of Morgan, the pair have had quite the feud of the last few years; the journalist regularly calls out Ratajkowski, which has seen him label her a "global bimbo" amongst other things. Keep scrolling to find out how the model reacted because it's pretty epic...