Eminem Is Currently Working on a New Album | 22 Words 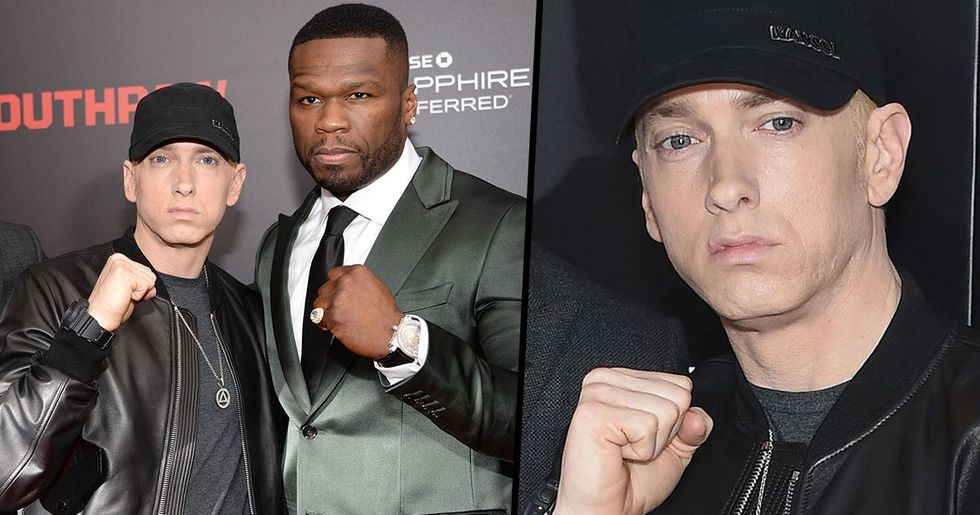 Eminem Is Currently Working on a New Album

The American rapper is one of the best-selling musicians of the 21st century - bagging multiple grammy awards and VMA's for his albums, including the iconic The Slim Shady and The Marshall Mathers. As well as his quick and improvised bars, Eminem has become famous for his highly-publicized feuds.

Eminem isn't one to shy away from a little bit of confrontation and has had beef with many high-profile celebrities in the past.

Keep scrolling to hear more about his up and coming new album, and to read about his famous rivalries, just because they're so damn entertaining.

Eminem has had his fair share of feuds over the years.

He wouldn't be Slim Shady without them though, would he? And, to warm you all up, I've taken the time to gather a few of his best feuds... You're welcome.

In the late '90s, Eminem and Royce Da 5’9 were inseparable and formed the rap duo, Bad Meets Evil - they recorded several singles together. When Royce wrote a verse for Eminem that seemed to diss the artist (which he claims wasn't ever meant in that way), Eminem was massively insulted and it sparked a feud that went on for 2 years, including multiple diss tracks between the 2 that followed.

But, don't worry, the pair eventually made up.

The pair set their differences aside and even went on to return to their original form, Bad Meets Evil, and, in 2011, released their EP, Hell: The Sequel. The duo have also gone on to collaborate on several tracks for each other’s albums, including “Not Alike" from Kamikaze.

Iggy Azalea is a controversial character when it comes to the rap world - she hasn't exactly enjoyed a glowing music career. In true slim shady style, Eminem made his opinion on her clear in the track "Vegas": "So what's it gon' be? Put that sh*t away Iggy You gon' blow that r*pe whistle on me."

Iggy then took to Twitter to fire back at the rapper.

The star responded by saying that she’s “bored of the old men threatening young women." Ouch.

On the 2009 track, "Underground/Ken Kaniff," Eminem raps, "Hannah Montana, prepare to elope with a can opener and be cut open like cantaloupe on canopy beds." That's pretty brutal.

She's even a fan of the rapper, tweeting that he's a "legend."

Okay, this one is a personal favorite. Slim shady certainly isn't afraid to get political. So much so that he alluded to killing former president, George Bush, in one of his songs. In the uncensored version of the star's song "We As Americans," which was leaked in 2003, lyrics like, "I don’t rap for dead presidents, I’d rather see the president dead," were featured.

The Secret Service even got involved.

His threatening lyrics landed the rapper in some quite serious trouble, with the Secret Service saying that they were viewing the song as a threat. However, in the end, no charges were ever brought against the rapper.

Okay, so this feud isn't exactly personal, but the rapper rapped some pretty brutal lines about the model and Bay Watch actress in his famed track, "My Name Is" from his 1999 album, The Slim Shady. "Got p*ssed off and ripped Pamela Lee's t*ts off And smacked her so hard I knocked her clothes backwards like Kris Kross."

But, this isn't the only time that he's come for the model.

On "The Real Slim Shady," he alludes to her domestic abuse charges against ex-husband, rockstar, Tommy Lee, too. "Jaws all on the floor like Pam and Tommy just burst in the door And started whooping her a*s worse than before They first were divorced, throwing her over furniture (Ah!)" In 1998, Lee was sentenced to 6 months in Los Angeles County Jail for assaulting Anderson.

The feud between the rapper and late-singing legend, Michael Jackson, began in 2004 when Eminem released "Just Lose It." The music video alludes to Jackson's alleged sexual behavior with young boys, including the lyrics: "I done touched on everything, but little boys That's not a stab at Michael That's just a metaphor, I'm just psycho."

He also expressed his hurt towards the rapper and said that the video was "disrespectful." "I've never had a problem with Eminem... I've admired Eminem as an artist and was shocked by this... The video was inappropriate and disrespectful to me, my children, my family and the community at large," he said at the time.

It's no secret that Donald Trump doesn't have a lot of fans, and Eminem certainly hasn't held back from expressing his views on the president. In October 2017, the rapper released a freestyle targeted at President Donald Trump, concluding with the lines: "And any fan of mine who's a supporter of his, I'm drawing in the sand a line. You're either for or against, and if you can't decide who you like more and you're split on who you should stand beside, I'll do it for it for you with this. F*ck you."

The track is full of other savage lines aimed at the president, including a line in which he calls Trump a "kamikaze that will probably cause a nuclear holocaust," and a lyric accusing him of giving "support for the Klansman."

On December 11, 2008, 2-year-old, Caylee Anthony's, skeletal remains were found inside a trash bag in a wooded area near her family home. Her mother, Casey Anthony, was accused of murdering her daughter but was acquitted of the charges.

But Eminem thinks that she's guilty.

Eminem vs Will Smith.

The problems between Eminem and actor, Will Smith, rose from a speech that the actor made at the 1998 Grammys, where he famously criticized the use of profanity in rap music. In a seeming response, Eminem added these lyrics to "The Real Slim Shady": "Will Smith don't gotta cuss in his raps to sell records Well I do, so f*ck him and f*ck you too!"

The rapper later explained that he felt personally attacked by Smith's comments.

"I felt like he was taking a stab at me and [Dr.] Dre and anybody who uses profanity on the records to express themselves. If you feel strong enough about something, then you might put a little 'f*ck' before you say exactly what you’re saying," he said.

The beef between Eminem and singer, Christina Aguilera, started when Aguilera called him out for his violent lyrics targeted at his ex-wife, Kim, in which he alludes to killing her. Then, in 2000, Eminem released the notorious "The Real Slim Shady," in which he included a lyric about Christina Aguilera sexually servicing Fred Durst. Of course, Aguilera clapped back, calling the line "disgusting... offensive and, above all... not true."

But the feud was far from over...

Aguilera released her own parody track in response to the rappers dig, entitled "Will the Real Slim Shady Please Shut Up." But the saga continued when, last year, Eminem released a freestyle called "Kick Off" and once again alluded to Aguilera in a sexual nature. When asked about the lyrics on What Happens Live with Andy Cohen, Aguilera said: "Get a new gig... have something else to talk about."

Raymond Scott, aka hip hop producer, Benzino, got on the wrong side of Eminem after, The Source, a magazine that he co-founded, gave the rapper's album, The Marshall Mathers, a 2 out of 5 rating. You're probably thinking "So? Albums get bad ratings all the time" and you would be right. In fact, at first, the review didn't even phase the rapper and in no way impacted the star's booming record sales.

But their feud escalated when this happened...

Benzino released a track entitled, "I Don't Wanna," aimed at Eminem, which, of course, meant that the rapper fired back with "The Sauce." Once again, Benzino clapped back, so Eminem released the track “Nail In The Coffin" in response. Eventually, Benzino apologized for the feud between the pair.

This particular feud all began when rumors circulated that Eminem and Mariah Carey had once had an affair, though Carey denied the entire thing. Attempting to keep the rumors at bay, the singer said: "Did I have a sexual relationship with him? No, I didn't... I knew him, I hung out with him a few times, but nothing sexual occurred... Maybe he thought because nothing happened he'd look bad or something."

Eminem was less than impressed by her comments...

True to his reputation, he fought back with a track, subtly named "Puke." In 2005, he played voicemails reportedly from Carey, and pretended to vomit. Savage. Later, Carey, released "Obsessed," which many people speculate is about the rapper.

Eminem's feud with fellow rapper, Ja Rule, stretches back quite far. It all started after rapper and actor, 50 Cent, produced some music dissing Ja Rule, resulting in him signing with Shady/Aftermath Records. Ja Rule was furious with Eminem for signing the star and threatened to retaliate.

The drama had deadly consequences for 50 Cent.

Ignoring the threats, Eminem released "Hail Mary" with 50 Cent and Busta Rhymes, rapping about how Ja Rule is merely a poor imitation of 2Pac. After, 50 Cent had a brush with death when he was stabbed by some members of Murder Inc., and then, a few months later, shot 5 times.

Eminem vs Nick Cannon (and Mariah Carey, once again).

The rapper turned up the heat on his existing feud with singer, Mariah Carey, when he told her then-spouse, Nick Cannon, that she'd cheated on him. In his track, appropriately titled "The Warning," Eminem raps: "Wow Mariah, didn't expect you to go balls out B*tch shut the f*ck up, 'fore I put all them phone calls out You made to my house when you was (Wild'n Out) before Nick When you was on my d*ck and give you somethin' to smile about How many times you fly to my house, still tryin' to count Better shut your lyin' mouth if you don't want Nick findin' out."

Here's what Nick had to say at the time:

"The way the Eminem thing started was that I never had an issue with him... If anything, I’ve been one of his biggest fans, but when another man crosses a line of disrespect, then you got to deal with it," he said. Looks like the rapper well and truly lost a fan.

Eminem vs Debbie Mathers, aka his mom.

Taking the top spot is the long-documented, notorious feud that the rapper had with his mom, Debbie Mathers. On several occasions, the star has referenced his turbulent childhood in his lyrics. Most famously, he throws a huge dig at his mom in the 2002 single, "Cleanin' Out My Closet," in which raps his well-known rhyme, alluding to his mom's drug abuse issues: "Just try to envision Witnessing your mama popping prescription pills in the kitchen... Victim of Munchhausen's Syndrome My whole life I was made to believe I was sick when I wasn't 'Til I grew up, now I blew up, it makes you sick to ya stomach."

I should hope so. That's a lot of beef.

Anyway, the story you're all here for...

Eminem is reportedly working on fresh material, which only means one thing... A new album, ya'll.

50 Cent made the bombshell revelation this week.

Speaking about a potential reunion with Eminem on LA radio station Real 92.3, he mentioned that the pair are actually working together at the moment.
"He sent me a record now, he working now," said Curtis Jackson.

50 Cent seems confident that Slim has still got what it takes.

"He got some things, man." He continued, "Still the highest-selling rap artist in the world. We're doing it now." New Eminem album? I. Am. Ready. As we all eagerly await more details on the long-anticipated release, it looks like Eminem's daughter is also in the spotlight right now. In fact, she's now a full-blown influencer with a huge following. Keep scrolling to learn more...