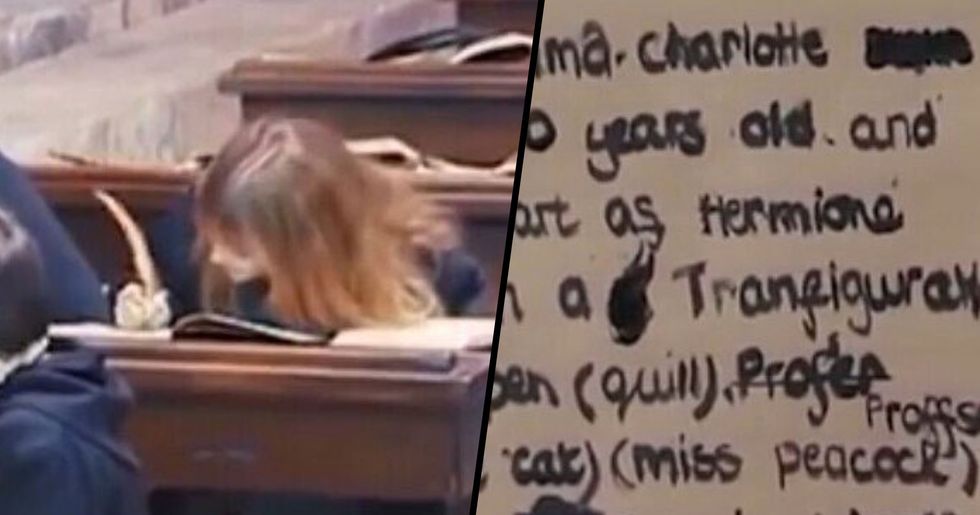 Just because it finished doesn't mean it's actually over.

Endless tributes and reunions of the Hogwarts gang have been happening, and the most recent revelation of Emma Watson is the most adorable thing.

Who remembers the first-ever Transfiguration class in the first movie?

The scene of the kids experiencing one of their first Hogwarts classes back in 2001 was adorable, to say the least, and it shows all the children eagerly taking notes of the magic they are about to learn.

It was a common occurrence to see book-worm Hermione frantically taking notes...

And in this particular scene, it turns out that Emma was actually writing a note rather than faking it - something a lot of the children were asked to do in order to make the scene more authentic.

Here is the adorable note...

“My name is Emma Charlotte Watson. I am 10 years old and playing the part of Hermione Granger. I am in Transfiguration. I love this pen (quill). Professer McGonagall (the cat) (miss peacock) is beautifull [and] is black [and] white. I wish I had a cat as a teacher," it reads.

This has melted the hearts of many Potter fans...

And we must say, it is the cutest thing!

But who found the note?

The note is, in fact, taken from the behind the scenes footage of Harry Potter and the Sorcerer’s Stone which belongs to Huntley Film Archives.

Emma is a true example of an amazing lady.

To keep reading about Emma and her amazing self, keep scrolling to learn about how she recently described herself as "self-partnered" rather than single...