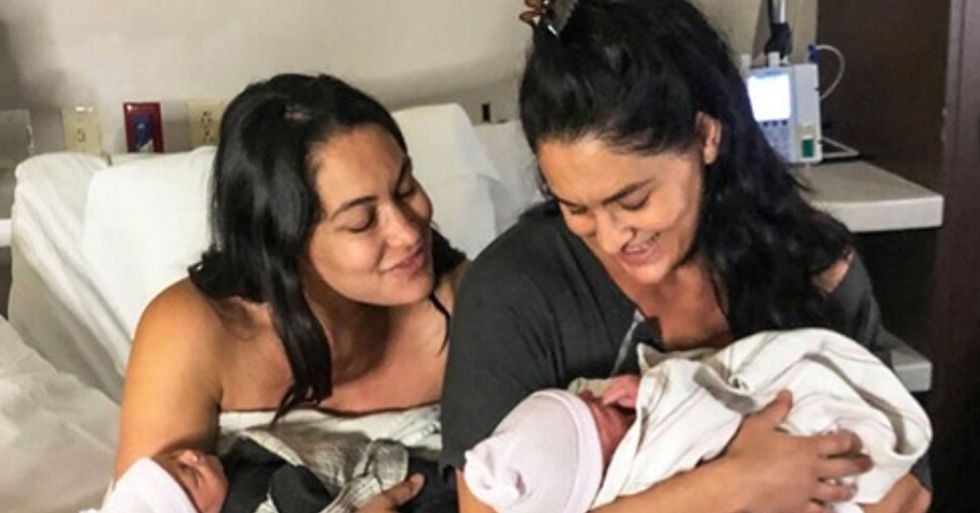 Nikki and Brie Bella have opened up about the emotional moment they met each other's babies in a candid interview, and it's the most heartwarming thing we've heard.

Brie and Nikki Bella have been honest and on the line throughout both their pregnancies.

And now, they've revealed more about the moment fans have all been asking about.

What was it like to meet each other's babies?

Well, the pair got candid in a brand new interview and it was super emotional.

Shortly after their appearance on the reality show, the twins were hired to be the World Cup Twins for Budweiser and were subsequently photographed holding the World Cup trophy.

But, in 2012, it was announced that the twins had been fired from WWE.

Executive Administrator Eve Torres pulled the plug on the duo after they began feuding with her during a Divas Championship match between Torres and Natalya. The twins allegedly then tried to attack Torres backstage.

Was it an uncanny coincidence or a well-thought-out plan?

“I was in yoga, and I kept getting this feeling that you need to take a pregnancy test, but I wasn’t even late yet. “And so I’m like, ‘Why do I keep having this feeling? Am I getting twin vibes from her? Because she just told me she’s pregnant?’ “I didn’t tell Artem at this point," she added. “I just want to do this by myself. When I came back in, and it said pregnant, I had to sit down for a second."

But at the start of August...

Brie Bella gave birth and welcomed her second child into the world with husband Daniel Bryan. The couple waited throughout the entire pregnancy before knowing the child's gender and now they finally know - it's a baby boy!

Nikki joined the club welcoming her son into the world. She, too, confirmed the news on Instagram.

The pair have shared the emotional moment they met each other's babies.

The pair opened up about the special moment to People Magazine.

"We're lucky because [our hospital rooms] were right next to each other and I was just like, 'My sister and I have been quarantined together and we're identical twins. Can she come in?' they said, 'Okay, in the middle of the night, we'll bring her, Artem and Matteo,'" recalled Brie.

"Because I had a [cesarean] section and couldn't get out of bed, they came in the middle of the night, around midnight. It was really emotional to see them and to just see her holding a baby."

Brie says it was an unbelievable moment for the pair.

"I was like, 'What?!' Like, 'That's my sister,' " Brie shared. "We just sat on the bed and she held Buddy and I held Matteo and we were just chatting."

"It was so special," she said. "It was so cute because seeing Buddy I immediately was like, 'Oh my gosh, that Bryan's mini.' "

It was a truly amazing moment.

"But he had these dimples and it brought me back to when I saw (Brie's 3-year-old daughter Birdie Joe, whom she also shares with husband Daniel Bryan)," Nikki added. "It was weird, though, for me to see my sister with a son, because I'm just so used to Bird. It was almost like reliving our labor again. Like, 'Whoa, look at this baby.' "

The twins then shared a snap of the incredible moment they met each other's babies.

And it's collectively warmed the hearts of the internet.