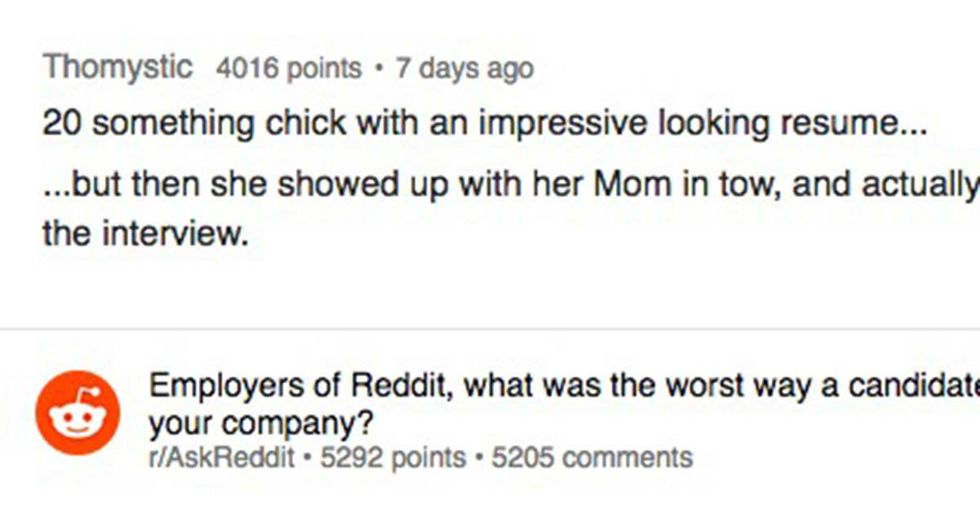 Interviewing for a job is awkward, no doubt about it. You want to sell yourself, but you really don't want to seem like you're selling yourself. Some people can pull off that balancing act with no difficulty, whereas others...well, you'll see.

Assigning blame to the company capable of hiring you definitely is not. They couldn't say "no" fast enough, I'm sure.

Third time's not ALWAYS the charm.

Sounds like this guy would have raised the office insurance premiums if he had been hired. That is, assuming he wasn't lying.

This is a really good indication that you're just not ready for a job in the working world.

Mom can't help you do your job, so she shouldn't be there for the interview.

But WAIT! Apparently parents attending interviews is now a THING!

Yikes. I knew about helicopter parents but...cut the cord, guys.

Ouch. If you're going to put a company YOU STARTED on your resume, you might want to remember the name.

Otherwise, your interviewer will think you're either lying about starting the company or too dumb to remember. Either way...not good.

To be fair, his story does demonstrate restraint and professionalism by not beating the dude up at work.

And he doesn't back down from doing what he thinks is right!

Lesson: If you're going to drop your meth in front of a blind interviewer, don't say what it is.

Points for honesty. But points against for being dumb as a rock.

If you arrive at a competitor's grocery store for the interview...keep it to yourself.

You're not exactly showcasing your problem-solving skills, now are you?

Oh, man. This goes from "bad" to "unforgivable."

Maybe don't let your mom take over the interview, no matter how sick you're feeling. Not a good look.

If you don't, you're basically striking out left and right. Not exactly company man material.

They called his bluff.

I'm guessing this was an interview for a job at McDonald's or something like that.

This lady proves that point nicely. Showing off your scabs on day one suggests some social obstacles to overcome.

That's actually an impressive amount of personal ground to cover in ten minutes.

But there are like five things in that list of topics that are deal breakers. Oops. Maybe next time, you just sit quietly, nod, then when you're asked what your biggest fault is, you just say you're a bit of a perfectionist and smile.