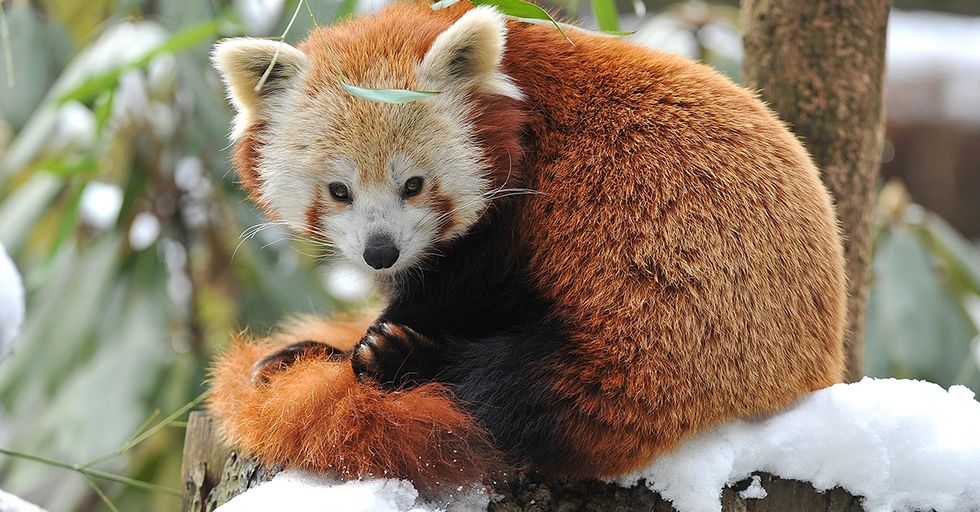 We've all had those weeks where we just wish we could escape our current lives, run away and take a day just for ourselves. A day trip seems ideal in times of stress because we all just want to disappear for a little while, but not all of us have the courage to do so.

Well, a fuzzy little four-legged creature is living the life we all wish we could and did the unthinkable. A red panda from the Belfast zoo escaped for the day and took itself on a little trip.

The zoo freaked out, the police got involved, but the internet was going crazy for the adorable girl to live her best life and enjoy her vacation, even if it was short-lived.

First of all, look at how adorable this creature is.

If you haven't seen images of a red panda before, you may want to Google it because they are the cutest things ever.

With a body shape similar to a raccoon, a face like a panda and the sneakiness of a fox, these animals can be found in the mountains of Nepal, northern Myanmar, and central China.

They can survive in pretty snowy conditions.

Their cinnamon-colored fur keeps them very toasty in the winter and they are very playful, so the snow makes for great grounds to play with their friends in. Does it get much cuter than this?

They love to snack!

They are herbivores and their favorite treat is bamboo, like their distant cousin, the panda.

They are pretty rebellious creatures.

Although they are relatively small creatures, don't underestimate them due to their size. If you turn your back for just a moment, they are already planning their escape.

The Belfast Zoo fell victim to their trickery.

The zoo located in Northern Ireland has over 130 species, one of them being the sneaky red panda.

They love these charismatic creatures.

A very important holiday, International Red Panda Day was in September and the zoo was pretty hyped about it.

But their loyalty to the red panda wasn't reciprocated.

The red panda was planning its escape, preparing to walk right out of its enclosure. One of the pandas (Amber) was feeling a little rebellious and decided to live it up a little, because, why not!

We've got a runner!

We're asking any Glengormley residents to look out for a red panda who went missing from its home @BelfastZoo today… https://t.co/Q9jmzrToQG
— Belfast Zoo (@Belfast Zoo)1548664804.0

The Belfast Zoo sent out an official announcement on their Twitter that one of their beloved red pandas had escaped, right under their noses.

The police and city council got involved, spreading the message to keep an eye out for the cinnamon-colored master culprit. Who knows where she could be by now!

Everyone was on high alert.

It even made national news! This was all within 24 hours of the red panda escaping. People were keeping their eyes on the news to see if there were any updates on the rascal.

We wouldn't want to capture the wrong girl! What if people accidentally grabbed a dirty raccoon or a really large cat?

There were some fans supporting his escape.

A few tweets were in support of her escape, urging her to embrace her new freedom.

It may be harder than we think.

Amber was going to blend right in. She was a master of disguise.

Did she have help in her escape?

I wouldn't be surprised if she pulled this off herself because she sounds pretty independent, but you never know how the animals at zoo work together.

Penguins are also masters of escape.

There's a good chance Amber had some help in her escape, which was later found to be through "a power fault" in an electric fence. That's what the Penguins want us to think...

Anyone have a hunch?

We've all had a late night McDonald's craving. I feel like Amber and I would get along quite well. Poor girl just wanted a McFlurry!

The search party has been intense.

The Prison Break panda was out exploring the sights and people were very excited for Amber because she was pretty much living her best life.

The police warned others to be careful on the streets as "our curious friend has not yet learned the green cross code."

We are happy to report that the missing red panda has been located and is being returned to its home at Belfast Zoo… https://t.co/6S9TiwCWek
— Belfast Zoo (@Belfast Zoo)1548675209.0

Many people called in to report sightings of Amber, which eventually led the police to find her in the streets where they were able to capture her.

Here she is, frolicking in the real world.

A local caught Amber on camera running through a garden, leaping and trying to be as sneaky as possible. It looks like she wasn't going down without a fight though.

The search is over!

Amber was found and returned safely to the zoo.

There were some disappointed fans.

This poor little girl was hoping to get a visit from Amber. My heart basically exploded when I read this tweet. Looks like she'll have to make a trip to the zoo to see Amber in real life!

She didn't make it that far.

Amber just wanted to see the sights and enjoy a natural garden, but she only made it less than a mile from her zoo, which is much further than a lot of the other animals can say they've gone.

People were really living for all this hype.

It was quite a thrill to follow along with this short, wild ride that Amber led us on. People felt like this escape was seriously entertaining, so when it ended all too soon, there was a little bit of disappointment.

Amber was quite refreshed after her trip.

The zoo vet did a full health check on Amber to make sure she wasn't injured on her little vacation and reported she was completely okay.

But she's under some serious observation.

"Amber is in good health but continues to be observed," the zoo said in an official statement. They've got eyes on her, who knows what she'll do next?!

After all the drama, life went back to normal at the zoo.

The zoo staff was relieved to bring Amber back, as one of their main goals is to preserve the species as it continues to remain on the endangered species list.

The pandamonium finally died down.

All of this drama happened in under 24 hours, but man what an exhilarating day that was. Does anyone else feel like they need a nap?

Was this the most exciting part of my week?

You're dang right it was. Amber is my new inspiration. Share this article if you feel equally as inspired by her boldness!