Engineer Calls Scientist ‘Unprofessional’ Because of Her Red Hair and Tattoos, She Ruins Him | 22 Words 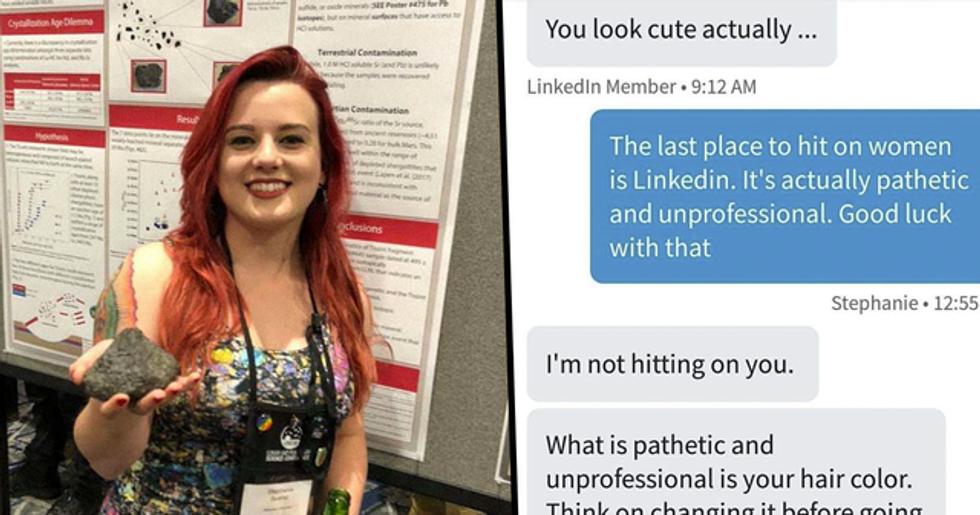 Engineer Calls Scientist ‘Unprofessional’ Because of Her Red Hair and Tattoos, She Ruins Him

In spite of many believing that the two genders have achieved equality, once in a while, a story comes along that proves how far we have still to go in terms of feminism. Because, while we can now vote, own property, and even take contraception (gee, thanks guys!), there are some areas which truly highlight how different the female and male experience still is. And one place wherein women are consistently treated more poorly than their male counterparts? The workplace.

One woman decided that enough was enough this month, though. Stephanie Suarez, an isotope geochemist from Texas, highlighted the sort of interactions that female scientists are regularly subjected to - and the internet came out in massive support.

It seems like many of us out there are constantly under pressure to "have it all." We're required to be perfect partners, mothers, and employees, all at the same time - it's no wonder we're all so tired.

Women seem to be almost constantly underestimated by society as some sort of weaker, more delicate type of human.

Because, on top of all of the stuff we have to do?

We're also expected to look flawless and perfect while doing it. But, like, not try too hard, either. Got it?

And there's one industry in which female appearance is under particular scrutiny.

In academia - and the sciences, in particular - the way that a woman looks seems to be nearly always a topic for discussion. These are industries typically dominated by men, after all.

Which can often lead to a pretty uneven power dynamic.

And, depressingly enough, this can sometimes lead to one particular reaction from the men. They seem powerless to resist getting their flirt on - in spite of the totally inappropriate setting.

And we all know how men get when they're told not to do something.

Absolutely (and totally unnecessarily) furious, of course. And this story is a total microcosm of this phenomenon. Curious? Read on.

She's obviously way more than a pretty face - and is totally fed up with being referred to by her appearance. She posted this image with the caption: "From running the mass spectrometer, to performing ion-exchange chromatography in the clean lab and finding zircons with a needle. #Geochronology and #geochemistry gave me my confidence back after dropping 'intro to chemistry' as a freshmen. #ScientistsWhoSelfie."

Because, alongside being a scientist, Suarez is so much more.

And one man on LinkedIn couldn't seem to get his head around this. Suarez posted a screenshot of her conversation and tweeted: "I just made my appointment for my second tattoo and gonna redye my fire engine red hair this weekend. Got yelled at by an engineer at Chevron via LinkedIn for it. In my opinion, commenting on someone's appearance is more unprofessional than what I have on my arms or hair."

People were shocked by the rude nature of the exchange.

The fact that this man seemingly came out of nowhere to hit Suarez with a weird insult had the internet feeling confused.

But Suarez was quick to follow up with the tea.

@docsnowtx @JoleahLamb Engineers at Chevron apparently. Him hitting on me is what started it. When I posted it on a… https://t.co/1yo7eDHleg
— Stephanie E Suarez (@Stephanie E Suarez)1564190509.0

And, of course, it all began with this random man trying to flirt with Suarez - on LinkedIn, of all places.

Suarez was also quick to stand up for herself.

Because let's just think about it for a second, the color of someone's hair and their skills and abilities simply do not correlate.

Many wanted to simultaneously compliment her striking hair and her refusal to take any nonsense from men on the internet.

Others shared stories of solidarity.

@geologiststephy I got sacked for having tattoos once. I have more tattoos and a better job...
— Ken Hamilton (@Ken Hamilton)1564255108.0

If a company is willing to let go of a valuable asset for something as trivial as a bit of ink, they're clearly not making the best business decisions.

Others pointed out something obvious.

This guy is, quite simply, the worst.

But, sadly, he's not exactly an anomaly.

In fact, it seems that men treating LinkedIn as their own personal dating app and trolling platform is basically an epidemic at this point.

And others made this observation.

@geologiststephy Aside from anything else, that’s a pretty standard hair colour. You’d get away with it under most… https://t.co/ckWXVHRUkV
— big sick energy (@big sick energy)1564276035.0

Sure, Suarez's hair is eye-catching - but it's hardly the most out-there shade we've ever seen. In fact, it barely warrants a comment - particularly an unsolicited one.

Hey, they're not wrong!

There was a distinct flavor of a double standard.

@geologiststephy @JoleahLamb I love that you were called rude for telling him where you work and what you do but he… https://t.co/CzfV96adHX
— Jen Greenwich (@Jen Greenwich)1564231595.0

Suarez was accused of poor manners when it was the man who initiated this less-than-civil interaction. Huh?

And using honesty as an excuse doesn't make it ok.

Sure, perhaps honesty is the best policy during difficult conversations with a friend, but when it comes to unsolicited advice on a stranger's appearance, maybe you're better keeping your mouth shut.

Others were simply shocked at the audacity.

Man: is rude. Woman: calmly responds. Man: accuses the woman of being rude.

In an industry that relies on innovation and finding new ways of thinking, there really shouldn't be a place for these sort of archaic viewpoints.

Although someone made this valuable point.

We are feeling just a little bit jealous of Suarez.

And this is worth thinking about.

Let's consider for a moment all of the potential scientific innovation that we may have missed out on thanks to the old-fashioned barriers preventing certain "types" of people from entering the industry.

Oh, and let's not forget this.

The very idea that Suarez has made any decisions regarding her appearance in the hopes of attracting men is, simply, incorrect.

Small-mindedness will only end up hurting the world.

If the way anyone looks would cause you to make assumptions about them, then perhaps you should, in fact, be taking a closer look at yourself.

The world is exceptionally varied.

The privilege is rife.

Listen, it's a cliche for a reason: if you haven't got anything nice to say, just don't say anything at all!

Many were curious as to whether the man faced any repercussions.

But Suarez claims that she's too nervous to reveal his name - and, even worse, that this sort of treatment is a pretty commonplace occurrence.

She also claims that the story is ongoing.

Also omg, my updates have not stopped. I wish I woulda saved the names of every creep that threatened me when I ini… https://t.co/j5gA9CN9Zr
— Stephanie E Suarez (@Stephanie E Suarez)1564288242.0

It seems like this is one guy who simply does not know how to quit.

Although there is something of a happy ending.

Because, if nothing else, we've seen the internet come together to defend a brilliant woman, and to take down a man who had absolutely no business getting involved with her. And for more examples of men quite simply not getting it, scroll on!