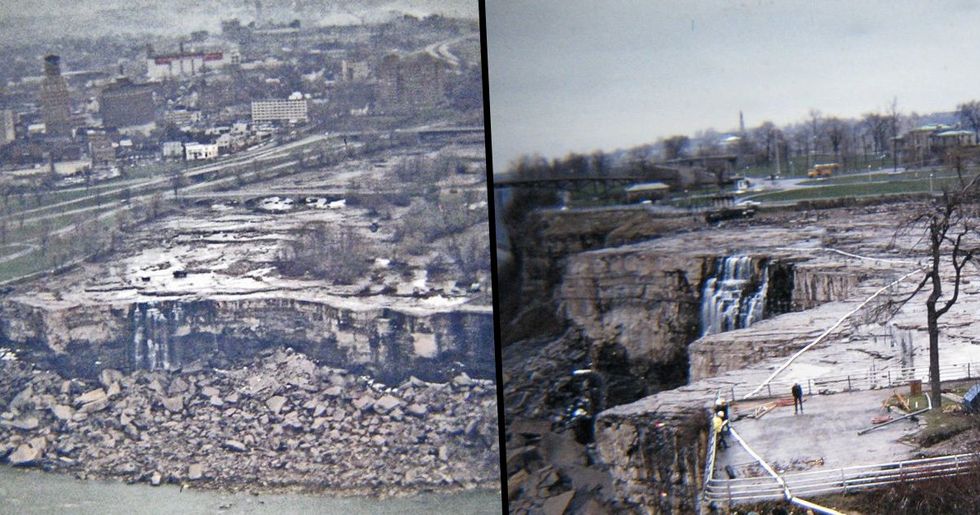 Even if you've never visited the Niagara Falls, chances are you're familiar with them. They're three waterfalls that extend along the international border between Ontario, Canada, and New York. They're very famous and beautiful– every year, tons of tourists go to look and take in their spectacular glory.

Even if you're an indoor troll like me who never likes to wander very far from any electrical appliance, you can't deny the beauty of the falls. They're stunning and dreamy and all of the things.

Time for a history lesson! Did you know that in 1969, for a few months all of the falls within Niagara Falls were turned off? I know, it seems crazy but it's true– 1969 was a wild time. We went to the moon and we drained the most famous waterfalls in the world. What a time to be alive!

If you were to wander by the falls in 1969, you might've noticed that something was a bit off.

American Falls, one of the three waterfalls, is known for a giant rock pile at the base of the fall. These rocks are because of the natural rockslides that happen over time.

But in the late '60s, there was some concern regarding these rockslides.

There was concern that as more rockslides occurred, the rocks would erode the falls away.

What if the Niagara Falls ceased to exist?

It was a worrisome thought, obviously. In order to avoid that happening, and to study the composition of the falls, an American-Canadian commission decided that it was best to drain the falls for a total of five months.

The draining took place in June 1969.

After the falls were dry, the US Army Corps of Engineers began their investigation.

Let's take a moment to really imagine this. This was a huge effort and complicated process. Also, what on earth do you find when you drain the falls?

The investigative team found two dead bodies, which is a lot less than they expected. The falls has a history of suicides and accidents, so this number can seem low to some.

Predictably, there was a lot of excitement from tourists as the investigation went on.

As the engineers did their work to study the geographical landscape and research the rocks, tourists were delighted to collect coins that people had tossed into the falls over the years.

I imagine it was a bit of a treasure trove.

Although, I would feel bad collecting coins that people had thrown into the falls as they made a wish. It would feel like stealing wishes, would it not?

Many tests were done so engineers could gather their data.

The engineers planted instruments in order to monitor the movements of the rocks. Just as well, cables and steel bolts were implanted to stabilize the rocks.

They drilled holes for drainage in order to relieve the hydrostatic pressure in some locations.

But what about all the rocks at the base of the fall?

The general thought that the team had was to leave them where they were.

The engineers knew they could remove all of them, but decided it was a waste of effort for something that ended up being just an aesthetic problem.

So when did they decide to refill the falls?

In November 1969, American Falls had water flowing through it again after the investigation was complete.

It's crazy to think about the falls being dry.

There are so many interesting and cool facts about the Niagara Falls.

We've already covered this, but the Niagara Falls are made up of three separate waterfalls.

If you're like me, then for most of your life you assumed the falls were just one giant waterfall. But as previously stated,  there are three: Horseshoe, American and Bridal Veil.

The falls aren't the biggest in the world.

They're definitely the biggest in North America, though. But there are roughly 500 waterfalls that are higher than Niagara in the world.

Niagara Falls connects all of the Great Lakes.

Is it normal to find this fact kind of adorable? It's like a giant group hug, with lakes.

The falls aren't that old.

It may feel like the Niagara Falls have been around forever, but that isn't the case. Geographically, the falls are still considered to be in their "infancy" stage.

Can you guess who was the first person to ever plunge over the falls?

A 63-year-old woman! In 1901, Annie Edson Taylor decided that her path to fame and fortune was to plummet over the falls in a homemade barrel. She survived but she did not become rich.

Where does the word "Niagara" come from?

It comes from the Iroquois word "Onguiaahra" meaning "the strait."

Before photography, tourists were forced to sketch pictures of the falls.

If you wanted a selfie, forget it. You'd have to bring along a friend to sketch you and the falls.

Despite the varying size, they're all equally beautiful.

What created the Niagara Falls?

The falls were created by glacier activity that occurred roughly 10,000 years ago.

The longest drop (vertically) is 165 feet.

I would not be interested in taking that plunge, thank you very much.

The first tightrope walker crossed the falls in 1859.

Again, this is not something that I would ever do, nor would I advise anyone to ever do it. Can everyone stay happily planted on the ground?

The Niagara Falls State Park is the oldest in the United States.

And judging by these unbelievable pictures, for good reason. The falls are absolutely captivating.

In 2012, a tightrope walker crossed the falls.

Nik Wallenda was the first person to cross the falls by tightrope in 116 years! He had to get permission from both the US and Canadian governments. He also had to carry his passport with him when he entered the Canadian side of the falls.

Scientists think that the falls will eventually be gone.

But probably not for around 50,000 years, so we don't have to worry about it.

Did you know that there's an island in the center of the falls?

It's called "Goat Island" and is nestled between Horseshoe Falls and Bridal Veil Falls.

So, when are you planning your trip to Niagara Falls?

Just don't walk over them on a tightrope or decide to make yourself a barrel for plummeting. Share this with a friend who loves Niagara Falls!