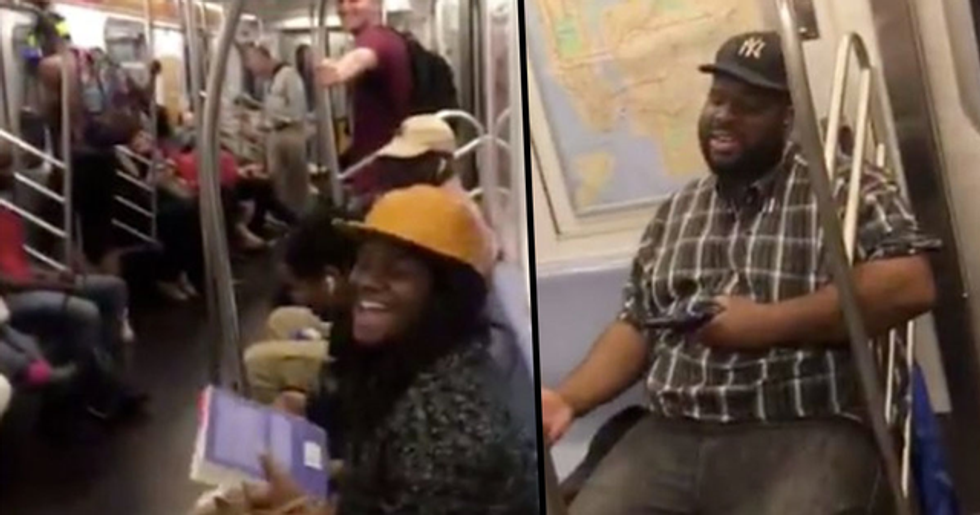 Let's face it. The daily commute is never the most exciting part of anyone's day, is it? Getting to and from work every day can often be a dreary experience, especially if you have to use public transport.

When you're wedged like sardines in a stuffy subway car while awkwardly avoiding eye contact with your fellow commuters, things can get a bit uncomfortable, to say the least.

However, one commuter in New York had a different experience entirely. After a long week, Twitter-user, Joel Wertheimer, was catching the subway home when another passenger brought a large sound system through the carriage. Before he knew it, the entire carriage had broken into song, with strangers singing in unison. Why has this never happened to us?

Luckily, Joe caught the entire thing on camera, and the footage is seriously heartwarming.

The New York subway can be a scary place.

With thousands of commuters from all walks of life using the subway every day, things can certainly get intense.

It isn't a place that we ever desire to be in...

Most people dread their commute to work. Because what's better than sharing a tiny space with a bunch of strangers, all while being fifty meters underground?

Though the subway can hold some glorious sights.

With so many different types of people using the subway, New Yorkers are often treated to some weird and wonderful sights during their commute.

Like the time that 2 commuters shared a bottle of wine.

One Reddit-user shared a photo of 2 men, who were apparently complete strangers, sharing a bottle of wine that had rolled out from under their seats. Stay classy, New York.

Or the time that a woman got stuck into a bit of food prep.

Because the New York lifestyle is just too fast for people to cook at home. This woman, much to her fellow passenger's delight, whipped out a chopping board and started cutting up onions. Not the most ideal smell on a carriage with little air space, though, is it?

And some people just get a bit too comfortable on their commute...

There's no need for that, is there?

But the subway can present some beautiful things...

There's nothing worse than a screaming child on public transport, is there? This one gent was pictured playing his violin for an unsettled toddler for the full journey. What a guy.

And, of course, there is Keanu.

It turns out that Keanu Reeves actually uses public transport from time to time. If this isn't reason enough to start using the subway, I don't know what is.

And it can bring people together.

Commuting on the subway can bring strangers together in ways that we never thought were possible, and there has been a surprising number of heartwarming moments.

Like the time that this little girl started a dance party.

Yes, this actually happened. Musical group, Coyote & Crow, were performing at the Bedford Avenue platform when an adorable little girl started dancing, prompting other commuters to join in.

Basically, the subway can be one big party...

And this week, one group of commuters made it happen.

With The Backstreet Boys, just to make this story that little bit more special.

It all started with a set of speakers...

Civil rights attorney and former Obama associate staff secretary, Joel Wertheimer, was on his journey home after a hard week.

Writing on Twitter, Joe explained, "Had a really tough week and tonight I was the subway and some guy walks between train cars, shirtless, bumping a speaker. I wasn't in the mood for Showtime particularly. But sometimes people and life surprise you and a little magic happens."

The unnamed man arrived in the carriage with his speakers...

... Playing the Backstreet Boys' 1999 megahit, "I Want It That Way," might we add. Speaking in an interview, Joe said that people were initially too shy to start singing. “Everybody was mumbling the words at first and then it just sort of crescendoed," Wertheimer explained. “Joyful is the best word I have for it."

But people quickly got stuck in with the sing-along.

It is unknown who started singing along first, but the whole carriage quickly broke into song.

You can watch the amazing footage here.

It's a heart-warming watch. Though, in all honesty, strangled cats do come to mind...

The best part of this story?

The Backstreet Boys responded! The band replied to the original tweet, saying that they live for these kind of moments.

Other Twitter-users were quick to praise the video.

People on Twitter responded to the clip, claiming that the magic of New York City is like no other.

And Joe has used his five minutes of fame as an opportunity to do some good.

The video has raked in over 30,000 likes, 8,000 retweets, and has thousands of people still responding to it. A few hours after posting, Joe seized his opportunity to share a donation link for the Coalition For The Homeless. He reminded everyone, "Not everybody on the train in New York is so lucky."