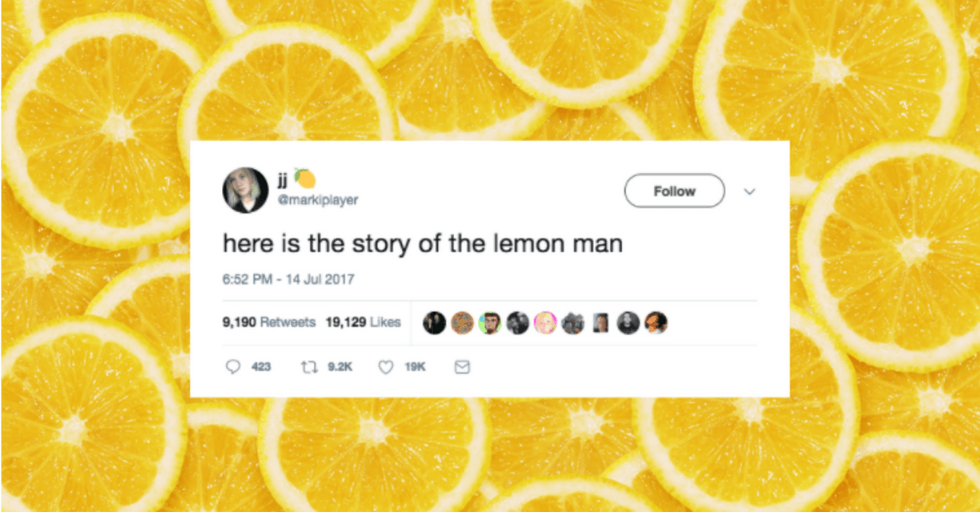 You might want a tub of popcorn for this one, folks.

Once upon a time, there was a Twitter user, @markiplayer, who innocently commented on a tweet, or so she thought. Little did she know she'd unleash a troll of epic proportions, a giant lemony man whose attitude was quite tart.

The Lemon Man saga is an epic tale with twists and turns and citrus emojis. Lemon Man's issues perfectly exemplify the idea of fragile masculinity. The Internet is a wild place.

The story is so nuanced and complex that JJ had to recap the whole thing in its own Twitter thread.

"Here is the story of the lemon man." Get. Ready.

The Start of It All

It started with a tweet that went viral. JJ posted screenshots from a thread by @that1mum that began with the tweet, "Starting a girls only gym that plays early 2000's pop music & we can all compliment each others butts & not get catcalled/started at by dudes." JJ posted responses to some of the super clever replies with, "i can't believe they obliterated straight men like that."

This is where it gets hairy. Men came out of the woodwork to tell JJ how offended they were by her tweet.

One of those people was this guy with lemon emojis in his username who responded with the sexist comment that "business would flop if women were in charge, get a male CEO to oversee it and this could be a big success."

In case you thought that was bad, this guy kept the sexist comments coming. It's really appalling.

And then it happened. The Lemon Man was born.

She called him "lemon man." And it is here the story spirals out of control.

Lemon Man did not like being called Lemon Man. "Call me lemon man again and you'll be reported to twitter for harassment," said Lemon Man.

As JJ writes, Lemon Man's displeasure is really very funny. So she does not give in to Lemon Man's requests and instead builds a Lemon Sheriff out of lemons. It's hilarious.

This only riled up Lemon Man even more. Imagine a lemon shaking uncontrollably. That's what Lemon Man undoubtedly looked like.

This is when Lemon Man threatens JJ with his friend that works at Twitter. "She keeps calling me lemon man..." he apparently texts his friend.

Twitter then pounces on Lemon Man with all the lemon jokes. Ouch. Stings like lemon juice in a paper cut.

Lemon Man didn't know what hit him.* *Hint: It was hundreds of jokes about lemons

Lemon Man decided he really had enough, and he requested that JJ send him a private message.

The DM is truly incredible. "This has gone way too far now," whines Lemon Man. "Before today my twitter account was highly regarded as a beacon of truth with some hard hitting opinions..." The crazy continues.

Meanwhile, Back at the Ranch

Next, the tale progressed to a group chat someone made. Lemon Man was included in it.

This is the actual heinous message Lemon Man sent in the group chat. Either Lemon Man has flipped the script and is actually in on the joke, or he is actually the perviest piece of citrus on the Internet.

Lemon Man used some terrible slurs in the group chat. Yeah, he's probably one pervy citrus fruit. But he apologized, and things seemed to be looking up, until...

Lemon Man sends a letter. A letter from a lawyer.

But never fear, Lemonheads: The letter was fake. To be fair, "James Roberts" does sound like a very official lawyer-y name.

After threatening legal action, Lemon Man deigns to send JJ this message: "I could see us getting married in like a decade." The Lemon Man doth misinterpret.

Needless to say, JJ is taken aback, and way confused about this message. The plot is too thick to see through at this point. There's nowhere to go but forward.

JJ was understandably tired of Lemon Man. He's a handful.

If you're still here, get ready because this is truly madly deeply the craziest part of the story. Lemon Man actually asked JJ for money because this whole crazy saga gained her a few Twitter followers.

This might actually be the funniest screenshot that's ever been taken. "...if I give you my paypal could you put some money in?" Keep dreaming, Lemon Man.

While this may be the end for now, we might not be totally rid of Lemon Man. Now go drink a crisp cool glass of Lemonade (the Beyoncé kind). You deserve it.