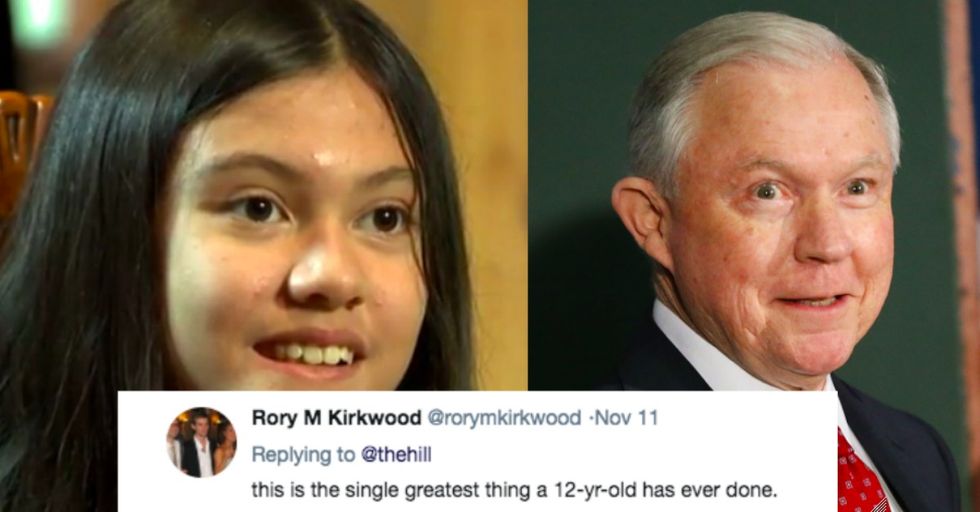 Alexis Bortell suffered from such serious epilepsy that doctors recommended brain surgery to treat her seizures. But then, Bortell moved with her family from Texas to Colorado, where medical marijuana was legal. Now, Bortell takes a drop of liquid THC in the morning and another one at night. She's been seizure-free for two-and-a-half years.

While this is certainly a win for Bortell's health, the 12-year-old cannot return to Texas and stay on the only medicine that has successfully treated her seizures. Because medical marijuana is illegal in Texas, if she were to return, she risks being taken away from her parents.

Attorney General of the Department of Justice Jeff Sessions has been a staunch opponent of legalizing marijuana, so Bortell joined a lawsuit against him.

The lawsuit was filed in July and also includes another minor, a military veteran, and former NFL player Marvin Washington. The lawsuit is over the federal classification of marijuana, which still lists it as a Schedule 1 narcotic, "an addictive drug with no medical value." It's listed in the same category as ecstasy and LSD, and it's supposedly more dangerous than cocaine and methamphetamine. That's clearly not the case, and it's time for the law to catch up to the science.

It's had an undeniable effect on her health and quality of life. No other medication she tried helped to the degree that the cannabis oil has. But, of course, Bortell would like to be able to visit her grandparents in Texas, and she hopes to one day attend college there. "I would like to be able to visit my grandparents without risking being taken to a foster home," Bortell told KDVR.

The lawsuit was filed in New York, and while it's probably a longshot, it's an important step for those seeking access to medical marijuana.

The lawsuit states, "This lawsuit stands to benefit tens of millions of Americans who require, but are unable to safely obtain, Cannabis for the treatment of their illnesses, diseases, and medical conditions."