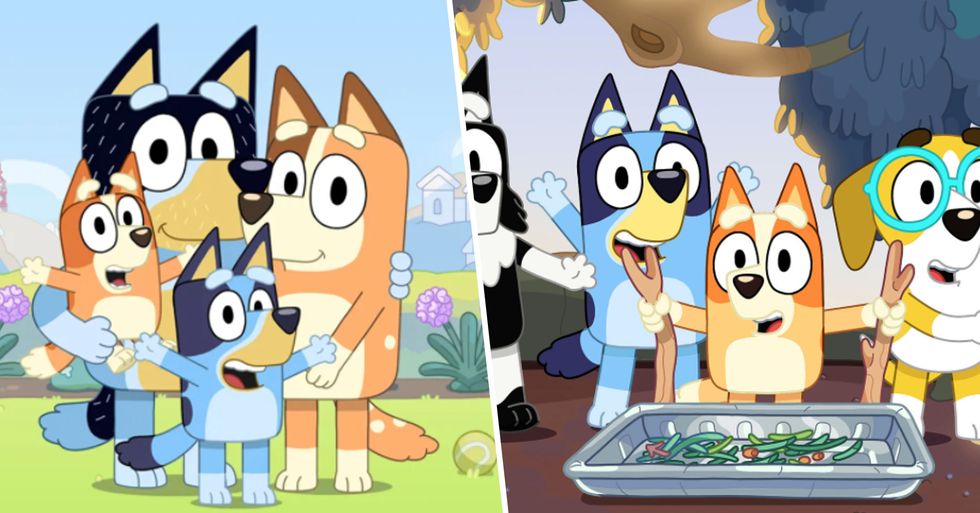 Episodes of a popular kids show has been pulled amid racism accusations...

Popular children's show Bluey has come under fire this week.

After watching the episodes in question, viewers were far from happy.

The show is extremely popualr among kids in Australia.

But 2 recent episodes caused quite a stir.

For those who aren't familiar with the animated kids show...

Here's a short rundown: It follows the adventures and antics of an Australian Blue Heeler Cattle Dog puppy as she interacts with her family and friends in everyday situations.

But, after news that 2 of its episodes had caused controversy reached social media...

Many fans were understandably confused, so ABC decided to clear things up.

According to an update provided by the network on their website...

Some viewers complained that an episode featured on ABC iView “included a term with racial connotations and a problematic history for Indigenous Australians."

The term in question was "ooga booga."

And caused outcry among some fans.

What exactly does "ooga booga" mean?

According to Urban Dictionary, the word was used in the times of cavemen and means “hello, goodbye, how are you, wassup … really anything you want it to."

According to one fan, the meaning of the word runs way deeper than this.

And causes offense among Indigenous people.

It has been taught for years that it was thanks to the British that Australia was discovered...

And that the country was just barren wasteland before the Brits took over. But this certainly wasn’t the case. The indigenous people of Australia were already living in the country...

It is believed that many of the indigenous people migrated from Africa and South East Asia.

The indigenous communities tried to protect their land, but, sadly, they failed against the forces of the British government, who were much more powerful than they were.

So many indigenous people died brutal deaths at the hands of British people.

According to sources at The Guardian, mass killings were first carried out by British soldiers in 1794, then by police and settlers – often acting together – and later by native police, working under the command of white officers, in militia-style forces supported by colonial governments.

And it has been estimated that around 20,000 people were killed in order to create a more “white" race for Australia – making it the only Commonwealth country to not have a treaty with its first people.

This is almost never spoken about in history books...

And the indigenous communities left today still feel the pain of their ancestors, as well as the racism and discrimination they have faced over the years as Australia has grown.

Discrimination against the community is very much still rife.

Which is why this fan felt it was important to call out the network that produces Bluey.

The fan spoke out in a Bluey Facebook fan page.

“I know to many you just see this word as “caveman speak", or in the harmless way the writers clearly did too," the fan shared.

"But not everyone sees it that way. Including me."

"I’m in my 40s, and I well remember a time growing up in Western Sydney where the phrase ‘Ooga Booga/s’ was used conversationally to describe a dark-skinned person/s. It was used in social circles, in movies or TV depicting black indigenous people as ‘uncivilized fools,’" they added.

“I personally balked at hearing it used in Teasing, but never said anything because I thought it was maybe just me."

An ABC spokesperson confirmed 2 episodes have been reworked to not include the term.

ABC also issued a public apology on its website.

"The ABC sincerely apologize to the complainant for any distress caused by the term used in the episode titled ‘Teasing’. The ABC has a strong record for giving voice to Indigenous Australians and an ongoing commitment to helping reduce discrimination and prejudice and in this case, the language used was inadvertent."

"The complainant was advised that neither the ABC nor the external producers were aware of the potentially derogatory meaning of the term, which was intended only as irreverent rhyming slang made up by children. The episode was removed from iView as soon as ABC KIDS became aware of the complaint and the ABC undertook to change the dialogue prior to future broadcast or publication."

The network says they are now reworking the episodes to be released again.

For more like this, scroll on to find out why people ate slamming Paw Patrol...