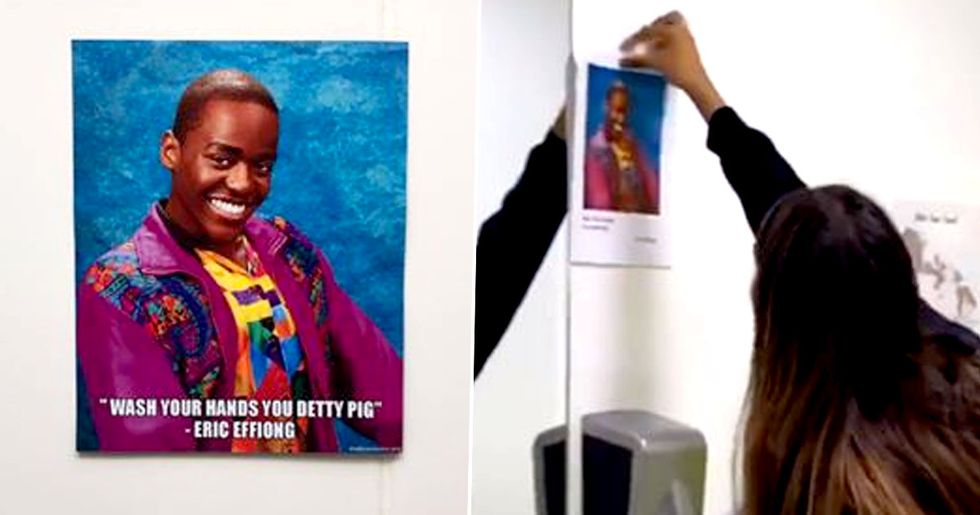 Eric From Sex Education Has Started a Global Hygiene Movement

Sex Education is super charming and sexy and funny and heartfelt. It's one of the hottest shows on Netflix right now with audiences lapping up every second of it.

The first season was an unprecedented hit - and fans eagerly awaited the drop of season two.

Just a few weeks it finally landed on Netflix and we were all very excited to switch it on. But, uh oh, what's that, what's that opening scene.

But now we've got some exciting news to share with you all. The character of Eric is leading to a global hygiene meme which is inspiring us all.

Sex Education premiered in Netflix just a few weeks ago.

#SexEducation has come out with a bang — the smart and emotional series is on pace to be watched by over 40 million… https://t.co/dRrARYVDXy
— Netflix Queue (@Netflix Queue)1547759160.0

And it is already quite the banger (pun 1,000,000 percent intended). Over 40 million accounts will watch it in its first month out.

The show centers around Otis, the awkward, sort of nerdy son of a sex therapist.

The show is funny, heartfelt, inclusive, and full of sex.

And you should definitely watch it if you haven't already. It's eight episodes of total delight.

Sex Education definitely plays into the high school stereotypes we all know...

The troublemaker, the jock, the nerds, the outcasts... But it does a great job of subverting those clichés and making its characters three-dimensional.

In short, there are a bunch of reasons why it's become a massive hit.

I tend to agree with this person, who categorized the show as a "MUST WATCH." There are so many good reasons to watch this show.

Here's a PSA for all of you:

I think the new Netflix show Sex Education is being marketed badly so I’m here to tell you all it’s pretty funny an… https://t.co/jlbNPkgxJx
— Rachel Rose (@Rachel Rose)1547426126.0

I really don't remember any marketing for the show, and to be fair, it seems like a tough show to market. It's really raunchy but also sweet, and grown-up but about high-schoolers. But Gillian Anderson should be enough of an endorsement for anyone to watch anything. She's amazing.

As the show gained popularity, however, people started commenting on how the show portrays high school...

As an American myself, it didn't really occur to me that the way Sex Education illustrates high school might not be at all realistic for British people.

It's a "bizarre mix of UK and US stuff."

The landscape was gorgeous but didn't seem particularly American to me. Though the students definitely wore letterman jackets. I didn't realize that wasn't a thing in UK high schools.

To be honest, it isn't really a thing in U.S. high schools anymore either...but we definitely recognize them when we see them.

But house parties don't happen in Britain? And does everyone, even public school kids, wear uniforms?

People were wondering why these choices were made.

3 eps in and still not sure about the British/American high school mash-up. A cop-out to capture a wider audience O… https://t.co/BWJCSbgEw0
— allysinyard (@allysinyard)1547506974.0

Some thought that maybe it was to try to appeal to a wider audience, while others thought maybe it was an homage to those '80s American high school movies. Not everyone was immediately on board...

Some people didn't really care about the universe.

I don’t know what British-American universe #SexEducation is set in but Kelly Clarkson definitely exists in it beca… https://t.co/gveAPS3fJC
— Shaun Kitchener (@Shaun Kitchener)1547229957.0

As long as Kelly Clarkson exists in it, they're happy. And she does. She very much does.

People really wanted to know if the portrayal of high school was a conscious choice.

The other option is that the people who made the show just really have no idea how British high school works.

Once I learned this, it made so much sense. And I kind of loved it even more! It is an homage to those movies, for sure, but it's also its own unique thing.

Even star Gillian Anderson chimed in on the topic:

I love that. Her character, of Otis's mom, is also an updated version of the over-the-top, silly adults that appear in those films. It all makes sense now.

Some noticed that the show also borrows from other high school shows like My So-Called Life.

But it is enough its own thing that it doesn't feel like a rehash or a ripoff. It's a smart and elevated show that happens to pay tribute to that genre.

Still, some people didn't quite buy the reality of the show.

So if you try to transplant British humour into some kind of weird pseudo-American setting with colossal high schoo… https://t.co/V1JJFdtKbY
— Adrian Bott (@Adrian Bott)1547455114.0

I didn't find the show "extremely odd" at all, but then again, I'm an American, super used to all those tropes.

This is funny. But also, there were so many kids in that show that weren't portrayed as being cool. I don't really know what he's talking about.

For many, though, there was no issue with the British-American hybrid high school.

I watched so much of Netflix's @sexeducation this weekend that my internal monologue thinking voice has been a Brit… https://t.co/2wus2Hkrko
— Paula Ersly (@Paula Ersly)1547500919.0

This is a real thing that happens when Americans watch a lot of British TV or movies. Does this happen to you?

The show got many with its perfect dialogue.

It really is a very funny show. And not every line is as sex-centered as these... But there is a lot of that.

It's also quite beautifully shot.

Seriously, Otis's house on the side of a mountain and the landscape is to die for. I really want to know where it was shot.

In addition to looking great, it tackles so many relevant issues.

I wholeheartedly agree with this take. It was also so effortlessly inclusive of all different sexualities and races, tackling the issues with grace and ease.

Not to mention, it makes you feel all the feels.

Ugh, that scene in the photo on the right... I don't want to spoil anything for you, but it's just done so perfectly.

The show will make you want to be friends with these girls.

They're messy and complicated and funny and smart like real women are. It was refreshing to see that representation on TV!

And finally Season Two has dropped.

also i started sex education last night and when the opening scene came on I SWEAR MY NEIGHBOUR MUST HAVE THOUGHT I… https://t.co/SuhZzcyMxo
— genn🤩 (@genn🤩)1579370215.0

And FINALLY it's here. After a year of waiting, twiddling our thumbs, and re-watching the first season, we have been granted new episodes and boy are they good.

However, the first scene is disturbing.

You may have seen it already, or maybe not, but if you go onto Netflix and start watching Sex Education season two well you'll be thrown face-first into a scene of hormonal adolescence.

It involves one helluva lot of erections.

And fans don't know what to think.

Some are ecstatic, others are totally disturbed. It's the marmite of the erectile compilation world. One fan said:

That opening scene was certainly... explosive.

There is, and I cannot stress this enough, NOTHING to describe how thrilled I am at the opening montage of season 2, episode 1 of Sex Education.

The entire montage doesn't seem to be available anywhere aside from Netflix so that's where you've got to go to really enjoy it! However we do have a snippet for you to, ahem, check out.

But now some more inspirational news.

While Otis remains as the show's central character, the supporting role of Eric is leading to a massive movement.

It's all about hygiene.

The movement stems from a scene in the first episode of season two, when Eric and Otis are having a heart to heart in the toilets. Their conversation is interrupted by another student who comes out of a toilet stall.

'You should wash your hands you dirty pig!'

And thus the movement was born!

@benjackthomas @TwitterUK Wouldn’t it be wonderful if I actioned my actual to do list as quickly as I actioned this… https://t.co/twVhE6ewh7
— Rebecca (@Rebecca)1580122324.0

It almost immediately became a very short and informative meme, informing people to wash their hands, the dirty pigs.

It started as a meme but now it's EVERYWHERE.

People have been printing the meme out and sticking it their office toilets and even at home. Eric truly is the hero we need in these dark times.