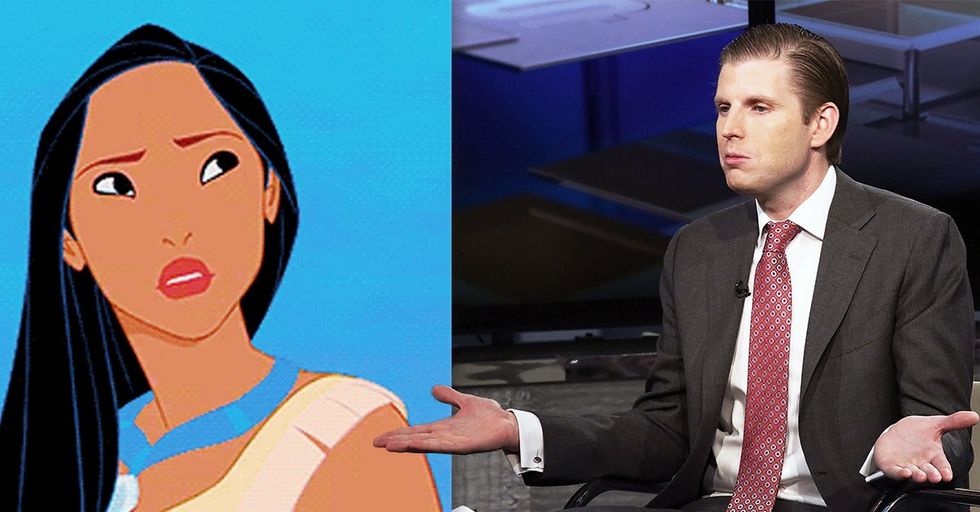 In the summer of 1995, Disney released its 33rd animated feature, Pocahontas, which purported to show the adventures of the Powhatan princess, Pocahontas. The film grossed $346 million, and Pocahontas joined the pantheon of Disney princesses. She was a fresh new type of princess, hailed for her bravery and fortitude. She even had "a badass tattoo," and a "a fantastic sense of humor."

She was also a complete and utter lie.

Oh, there was a real Pocahontas, all right.

The only thing was, her real name was Matoaka, which means "flower between two streams" (Pocahontas was a nickname, which basically means "naughty one") and she never had a relationship with John Smith, since she was around 10 when he arrived.

Also, John Smith wasn't particularly the type of guy you wanted to be with. In fact, he was a massive douche.

As Vincent Shilling of Indian County Today explains, "Smith was feared by many Native people because he was known to enter villages and put guns to heads of chiefs demanding food and supplies." Yeah, definitely not a hero.

So John Smith, not a good person. And the whole Pocahontas rescuing the colonists (and John Smith) – not true.

In fact, Pocahontas was taken prisoner by the colonists, during which time she was raped and terrorized. Then she was taken to England in a greedy ploy to drum up financial support for Virginia, and very likely poisoned to death. As you can see, the story of Pocahontas isn't really a good one...

So why, in the name of all the saints and denominations, did Donald Trump have her name in his mouth this Monday?

On Monday, Donald Trump was at an event honoring the Code Talkers, Navajo veterans who came up with an unbreakable code that was instrumental in helping America during World War II. As one veteran, Major Howard Connor, who was the signal officer of the Navajos at Iwo Jima, said, "Were it not for the Navajos, the Marines would never have taken Iwo Jima."

So the Code Talkers are a part of living history, America's treasured cultural legacy, a large part of the reason we weren't defeated in WWII... and wouldn't you know Trump just had to go off script and put his foot in his mouth as he spoke to them?

"I just want to thank you because you are very, very special people," Trump said. "You were here long before any of us were here. Although, we have a representative in Congress who has been here a long time ... longer than you -- they call her Pocahontas!" Just like that, Trump started a media firestorm, and there's a couple of reasons people are mad.

Trump has repeatedly called Warren "Pocahontas" before as a derisive allusion to her claim that she is part Native American.

"I am very proud of my heritage," Warren once told NPR. "These are my family stories. This is what my brothers and I were told by my mom and my dad, my mammaw and my pappaw. This is our lives. And I'm very proud of it." CNN notes "In that account and others, a genealogist traced Warren's Native American heritage to the late 19th century, which, if true, would make her 1/32 Native American. (However, the legitimacy of those findings has been debated.)" All this is to say, even though Warren has a vague claim to Native American heritage, Trump should not use it as an insult.

But people still couldn't understand why the comments were so offensive.

In fact, Michael Harriot of the Root had to break it down with this explanation. "Calling someone by a stereotypical name that is not their own because of their alleged ethnic or racial background is racist." Indeed.

He then gives the example of someone calling him "Leroy," a stereotypical name for an African American man (Harriot is African American) as a reason why it's so offensive.

He followed it up with this basic, commonsense explanation. "Here is the biggest reason Trump’s nasty nickname is racist: because Native Americans said so." Simple, right?

Completely wrong, because someone else just had to poke his nose into the fiasco.

The irony of an ABC reporter (whose parent company Disney has profited nearly half a billion dollars on the movie “… https://t.co/P6HnIeEoCG
— Eric Trump (@Eric Trump)1511877845.0

By someone else, we mean Eric Trump, the gun-happy, elephant-killing middle son of Trump, who waded into murky historical/political waters with an ill-advised tweet. "The irony of an ABC reporter (whose parent company Disney has profited nearly half a billion dollars on the movie “Pocahontas") inferring that the name is “offensive" is truly staggering to me," the tweet read.

Unsurprisingly, people on social media were not amused. After all, this tweet was asinine on several levels.

This commenter had the perfect breakdown of Trump Jr.'s tweet. Also, we're not sure Trump Jr. knows Pocahontas was a real person...

Another commenter, Congressman Ted Lieu of California, broke it down another way.

Exactly. But other commenters had more thoughts about Eric Trump's tweet.

Let's be very clear. Eric Trump just tried to excuse his dad's racism displayed at an event to honor war heroes by using a Disney animated movie as his defense. ?

The irony of Eric Trump, (whose “dad" has clearly shunted him to the shadows for his Quasimodo looks and stunted intellect) saying he’s staggered by ANYTHING his “dad" is accused of is… dude, STFU and sip your damn juice box. https://t.co/Dc3tYIPki0

In Eric Trump logic: You can call people a Tramp without it being offensive because Disney made a movie once...

bruh that movie was about pocahontas https://t.co/afFpntwfOW

I feel confident that Eric Trump does not know that Pocahontas was a real person https://t.co/CUwfTuG6w4

The takeaway here is – think before you tweet next time, Eric Trump. Also, the real Pocahontas story is really awful, so calling someone her name – especially as an insult is not the thing to do.