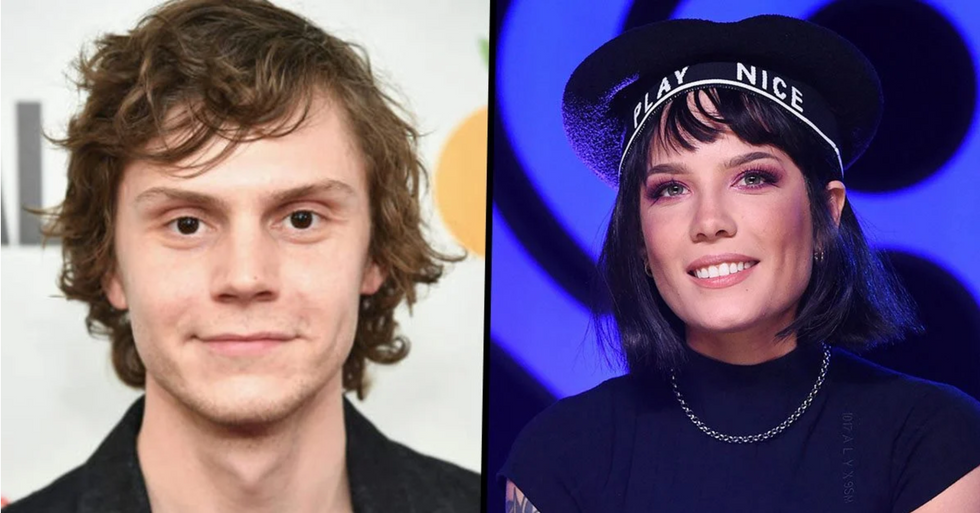 After 7 years of affectionate tweets, it has now essentially been confirmed that Halsey and Evan Peters are finally an item.

As I am sure you are already aware, Halsey, real name Ashley Nicolette Frangipane, is an American singer-songwriter hailing from New Jersey. Evan Peters, on the other hand, is an award-winning actor most well known for starring in multiple roles on American Horror Story.

While everyone continued to speculate if the couple were dating, the two have finally confirmed their relationship with matching Halloween costumes, not once but twice! Is there any other evidence we need? I mean, we're already out here thinking of ship names... Evasley? No? Maybe Hevan? Sorted.

Keep reading to see how the couple actually got together as well as their amazing Halloween costumes.

As far as we can tell, romance between the two originally came into being after a tweet was sent by Halsey almost seven years ago. The now-deleted tweet was posted in November 2012 and declared her crush on the American Horror Story star. The tweet read: "Seriously Evan Peters stop making me attracted to alleged sociopaths and accused murderers…."

But that wasn't the only time.

According to US Weekly, there were five more tweets made by Halsey wherein she wrote about her gargantuan crush on Evan. Unfortunately for us, every single one of them appears to have been taken down. Fortunately, we do know what some of the tweets said.

Halsey couldn't stop tweeting about her obsession with Evan.

One tweet made in 2013 reportedly said: "Petition for Evan Peters to date me." Another made in 2014 read: "I’m a f*cking liar I’m so in love with Evan Peters I’m so whipped I’m whipped as f*ck."

But it hasn't all been lovey-dovey.

Both Halsey and Peters were in relationships beforehand, both of which seem to have ended earlier this year.

Peters was engaged to Emma Roberts.

After a seven-year on and off relationship with Emma Roberts, which began after they starred opposite one another in 2012's Adult World, Peters allegedly called off their engagement in March this year.

Halsey was also dating until recently.

Whereas Halsey was dating British pop-punk star, YUNGBLUD, who even penned a track called "Halsey," which he recorded with Blink 182 drummer, Travis Barker. The song had an unbelievable 37 million views on YouTube, at the time of writing.

YUNGBLUD appeared to confirm his separation from Halsey recently.

Fans think that YUNGBLUD confirmed the news of their break-up before performing a concert in Orlando, Florida. Posting onto his Instagram story on September 27, YUNGBLUD yelled into the microphone, "somebody take me to Disneyland."

The comment is thought to be a reference to a Halsey and Peters' date.

Most fans immediately interpreted the "Disneyland" comment as a cheeky reference to Halsey and Peters, who were first pictured together holding hands on a rollercoaster. The rollercoaster wasn't at Disneyland, but another theme park in the U.S. - the legendary Six Flags Magic Mountain.

Halsey is somewhat of an American Horror Story super-fan.

Not only has Halsey been a lifelong admirer of Evan Peters, but she's also a gigantic fan of his most famous work, American Horror Story. In fact, Halsey was such a big fan of AHS that she even filmed the music video for her 2016 single, "Colors" in the same home wherein a lot of AHS: Murder House was set.

In behind the scenes footage showing the creation of the music video, Halsey gives Peters a shout out.

In March 2016, she released the behind the scenes footage in which she gives Peters' character a shout out. While walking through the home's terrifying basement, Halsey says: "Everything is spooky, the lights just started flickering before. Some say it's a loose bulb. I disagree. I think it's the ghost of Tate Langdon's past!"

Halsey has already spoken about the difficulties of being in a public relationship.

Speaking last October, Halsey was brutally honest about her "heinous" break-up with the rapper, G-EAZY. Halsey told Cosmopolitan: "I was doing Good Morning America and I’m in a blonde wig and white patent-leather outfit, twirling around while I’m going through a heinous breakup." She added that that specific moment made her think differently about her status as a celebrity.

She concluded that she thinks she's doing "all right."

She concluded: "I look down and there are these two girls, one with pink hair, one with blue hair, septum piercings, cool as fuck, still loving me, probably knowing what a weird time I’m going through. I looked at them, looked at myself in my sparkly Britney Spears outfit, and went, Ohhh no, they deserve way better than this. If those girls can be that brave in who they are, then I owe them better than this homogenized bullsh*t. But hey, if the worst thing that’s happened to me so far is I wore dumb clothes and dated a sh*tty dude, I think I’m doing all right."

Eleven months on from one "heinous break-up" with G-EAZY - and another with YUNGBLUD - things seem to be finally picking up for Halsey. She's finally dating her crush after 7 years of trying. And, with that level of commitment already, surely things are going to work out just right for the happy lovebirds.

Peters has also had his fair share of relationship problems.

Back when he was dating Emma Roberts, the couple were staying at a hotel in Montreal, Canada, when somebody in the next room called the police after hearing a violent argument in the room next door. It is believed that, after having a "heated argument," the couple began fighting with one another.

When the police arrived, they immediately arrested Roberts.

Roberts was arrested immediately by police - however, Peters was not because Roberts had no visible injuries when police arrived. Peters refused to press charges against Roberts and the couple released a joint statement afterward, calling it an "unfortunate incident and misunderstanding," and added that they were working to move past it.

They called off their engagement earlier this year.

Earlier this year, Peters and Roberts officially called off their engagement and went their separate ways. Since then Evans has been relatively quiet about his love life. That is until now.

Even though US Weekly confirmed that Halsey and Peters are official, there was still a lot of speculation.

Just weeks after their romantic getaway to Six Flags in LA, US Weekly has confirmed that the couple are together. They also state that they've been a thing for weeks.

But now all that speculation can be put to rest!

If there wasn't enough Halsey and Evan content out there, there is now.

This weekend the two were spotted in spooky, "goth" costumes.

While at Halsey's "Almost Famous" party, the couple were spotted together the whole night and even left the party holding hands.

One fan even witnessed them "making out in front of them."

PDA is typically considered uncomfortable, but you know what, they seem to be a match made in heaven, so we'll allow it.

And that wasn't the only instance the two were spotted together.

On Saturday night, the two dressed up as the iconic Sonny and Cher while attending the 100th episode celebration for American Horror Story.

And we're totally here for it!

Look at the way she looks at him! I'm definitely stanning this couple.

You can't deny it, they're so goddamn cute!

While some fans don't seem to be on board, we definitely are.

Some of her most loyal followers believe she's moved on a little too fast for comfort. But hey, sometimes love waits for no one.

After being unsuccessful with love in the past, let's hope that the happy couple can make it last.

Fingers crossed the new and happy couple can enjoy spending years together in a happy relationship. We've got every faith in you.