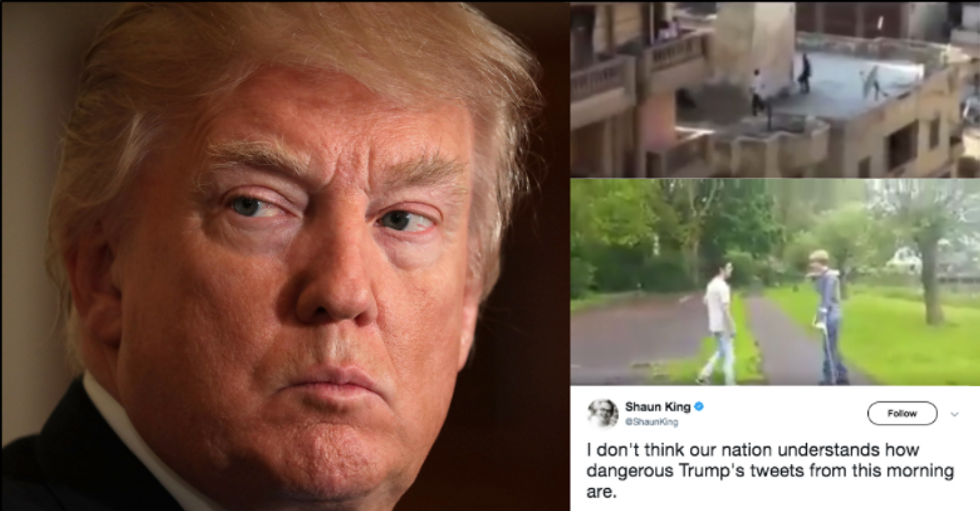 Even Avowed Racists Are Condemning What Trump Tweeted This Morning

A lot of Donald Trump's gaffes are completely laughable. Like accidentally tweeting a birthday message to a random guy who hates him. Or completely screwing up the simple act of taking a sip of water from a bottle. Those things are funny, and certainly not presidential, but they're not harming anyone directly.

But most of the time, Donald Trump's missteps are harmful — either to one individual or an entire group. When he complains about "ungrateful UCLA players," he's inciting racism. When he challenges news outlets to a "Fake New Contest," he's attempting to discredit the media whose job is to call him out when he lies (which he does. Often.)

And when he shares anti-Muslim videos with millions of people — something he's done today — he is making the statement that it's OK to be Islamaphobic.

It'd be one thing if this guy was your crazy Uncle Don who has no platform, but this man is the President of the United States. This cannot be tolerated.

This morning, Donald Trump retweeted a series of violent videos.

(We've screenshotted the videos here both to show Trump's retweet and because they are unfit to embed on our site and we have no interest in giving them additional views.) The first video claims to show a Muslim man attacking a man on crutches.

The second video claims to feature a Muslim man destroying a statue of the Virgin Mary.

Please note, we can only say the video "claims" to feature a Muslim man, as Islam is a religion. That's not something you can tell by looking at a person.

The third video is the most graphic.

It features a group of people pushing another person off a roof and, according to the title, "beating him to death." The title of the video claims that the violent mob is made up of Muslims.

The woman who originally posted the videos, Jayda Fransen, was thrilled to have been retweeted by the president of the United States.

Fransen currently has just under 60k followers on Twitter. Thanks to Donald Trump, her videos which were specifically designed to incite hatred toward Muslims, were shared with his nearly 44 million followers.

As if sharing videos that encourage Islamaphobia isn't enough proof that Jayda Fransen is a morally corrupt individual, there's also this:

Fransen is the Deputy Leader of the Britain First political organization — a far-right and ultranationalist group that has made headlines in the U.K. for anti-Muslim rhetoric and behavior. The founder of the group, Jim Dowson, has shared his desire for a religious war in the U.K. Fransen herself was just today convicted of an anti-Muslim hate crime and is awaiting trial on additional hate crime charges. Obviously, this is all awful. The fact that the President of the United States would link himself to a hate group like Britain First is...inconceivable. The thing is, we're not the only ones who think that. Even avowed racists are condemning the videos that Donald Trump saw fit to retweet...

He's a bigot and a conspiracy theorist who works for Alex Jones. And even he thinks retweeting anti-Muslim videos is "bad optics" for Donald Trump. Obviously, he's not wrong, but when people like Paul Joseph Watson say you've got bad optics, that's gotta tell you something, right?

Piers Morgan, who has called himself a friend of Donald Trump's, also thinks the president's decision to share videos that encourage Islamaphobia was a terrible one.

Good morning, Mr President @realDonaldTrump - what the hell are you doing retweeting a bunch of unverified videos b… https://t.co/bFcPjiSCmS
— Piers Morgan (@Piers Morgan)1511957306.0

He also tells Donald Trump that he should delete the tweets. And, yeah, he should. They have no place on the President of the United States' Twitter account. But he also should never have posted them in the first place. The damage has been done.

David Lammy is a member of British Parliament who is just as shocked as the rest of us by Trump's seeming endorsement of a hate group.

There are only so many ways to say this behavior is completely deplorable. It's unfitting of any human, let alone Donald Trump. Nothing could possibly excuse this.

Trump has legitimised the far right in his own country, now he’s trying to do it in ours. Spreading hatred has cons… https://t.co/V6BdewqQtt
— Brendan Cox (@Brendan Cox)1511957219.0

Sharing these videos doesn't just reveal Trump's own bigoted feelings toward an entire group of people. It legitimizes others' bigoted feelings as well. It tells his 44 million followers that Islamaphobia and anti-Muslim behavior is A-OK in the president's book.

This behavior is wholly inexcusable. We cannot let these messages of hatred be our country's legacy.