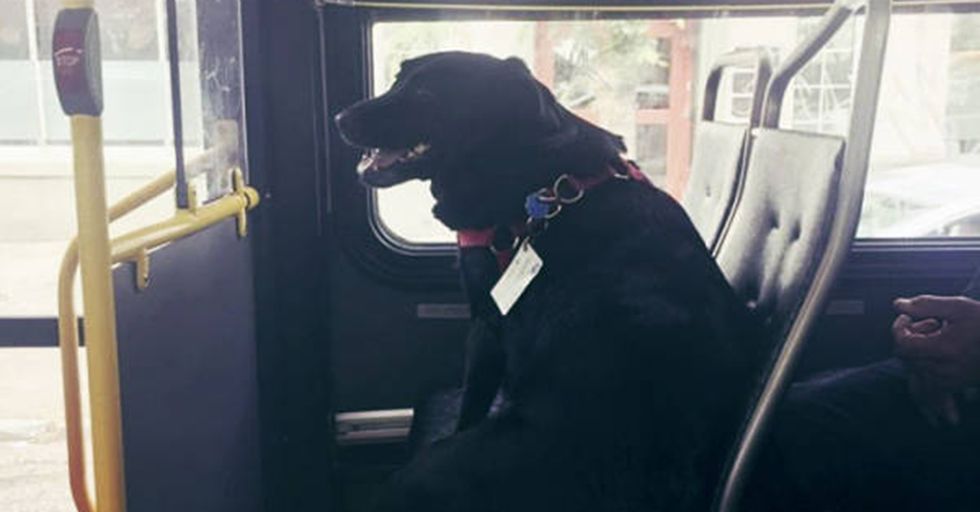 Every Day, This Clever Dog Rides the Bus ALONE To Her Favorite Park

We know dogs that can be pretty resourceful, but how many do you know that own a bus pass and regularly commute by themselves. Before you answer "none," take a look at Eclipse and her wonderful story.

Other dogs might bark at cars, but this pup's riding in them.

Well, a bus, actually. If you're on the D line in Seattle, you might just come across one passenger that's a little furrier than the others.

Her name's Eclipse, and this black lab is something special.

She rides solo after months of riding with her human.

Eventually, Jeff Young, her owner, realized that she was essentially ignoring him the whole time out of the house until they got to the park.

After some careful consideration, he clipped a bus pass to her collar and let her make the trip alone!

Only, as you can imagine, there are a lot of people looking after her, including the driver, so she's not really "alone." What a brave dog!

The first time she rode alone, it was an accident.

She got on the bus before Jeff did, and the bus took off without her. He found her at the park and realized she had no problem making the trip alone.

Now she rides with many other regulars, so it's pretty much like a family when she's aboard.

Jeff doesn't worry one bit about her. She's got friends on the bus and friends at the park to look after her, and she's chipped as well!

The ride's only four stops, but Jeff thinks the bus is actually safer than walking due to the cars and foot traffic.

Many of us would get an uneasy feeling about this, but Eclipse really seems to know what she's doing!

The county allows animals on the bus at the driver's discretion.

And since Eclipse is BFFs with pretty much everyone on the route, that's never an issue. She's always the most popular rider.

Jeff still rides with her or walks every chance he gets.

But he also thinks that Eclipse really likes being on her own for these adventures every once in a while.

“She makes everybody happy. How could you not love this face?"

Don't you wish every bus had a dog like this? I mean, assuming you're not allergic to dogs or anything like that. What's not to like?