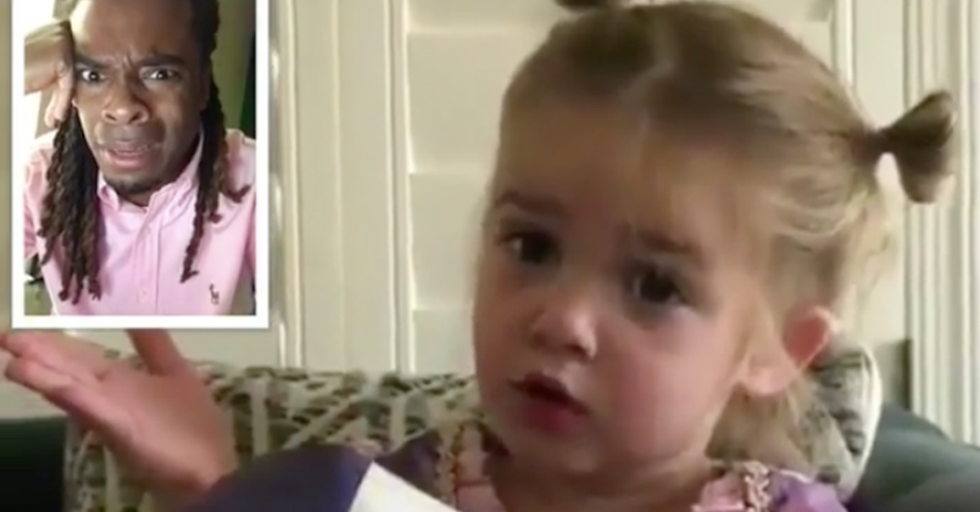 I always knew that toddlers were dramatic, but I never knew that they could be this dramatic.

She may look like a child, but based on how she talks, she's a reality TV star in the making.

Her name is Mila, and she puts on quite a show.

The guy behind this video (pictured in the corner of the FaceTime) is an Instagrammer. He thought he would check in on his friend's kid to see how her first day of school went.

And, well, as little Mila tells it, the day turned into a whole big...thing. Watch Mila, who might be ready for her own real-world soap opera.

She really busted out all the stops there, didn't she?

Eye rolls, "talk to the hand," and "Checkmate!" I would say she's gonna be a handful, but it's pretty clear that she already is a handful. But people are eating it up. I guess it's a lot more fun if you don't have to be around this type of person all the time!

I mean, this is a more quotable video than Anchorman.

I have to believe that she had a little coaching here, but she still sells it so well that she scares me.

Is she really only two? Nah. She's gotta be older than that!

If so, I shudder to think how she'll be acting at age 13. Yikes!

I bet she sends food back at restaurants a lot. She probably also says "Can I speak to a manager?"

The scariest part? I wouldn't be surprised if this is how toddlers actually talk now.

I mean, parenting's tough enough. Get out there and go chase some butterflies or play in dirt, Mila. Don't grow up this fast!

By the time she does get to law school, I think we'll be ready for that Legally Blonde reboot starring...

...Mila. I wouldn't want to see her in court. Or on the street. Or anywhere, really. She's just a bit...much, wouldn't you agree?