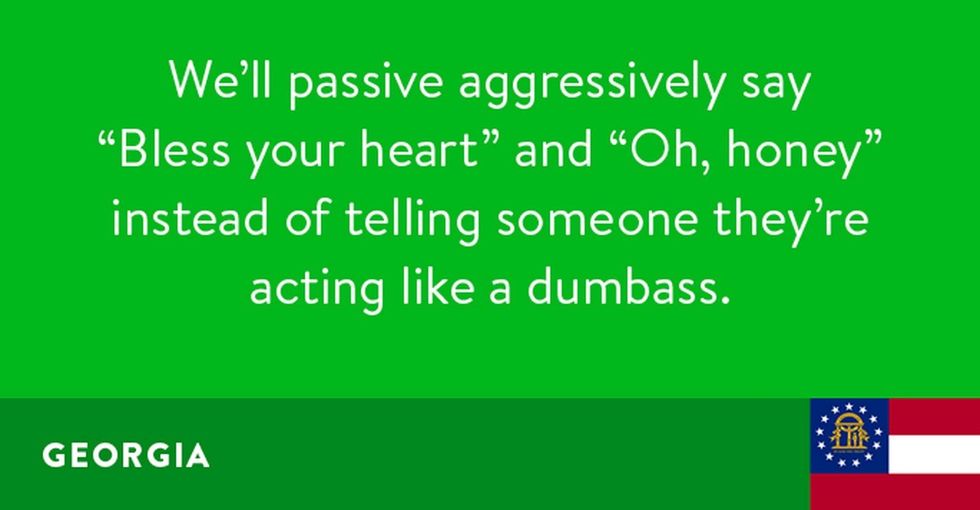 Arizona is the hottest state. Don't mind me, but I don't want to live anywhere where I have to check my shoes for scorpions.

It's true that everything is really expensive in Hawaii. But that's OK because it's worth it.

No, I mean Idaho! Where else would a country get its potatoes?

Do you know what Illinois looks like besides Chicago? Yeah, me neither.

This about sums it up. Parks and Precreation really put Indiana on the map, though.

I always forget about Iowa. Apparently, that's not such a rare thing.

The best thing about Kansas is when you leave it and you can say, "Toto, I don't think we're in Kansas anymore."

This sounds pretty great to me. Who wants to plan a trip?

New Orleans more than makes up for the rest of Lousiana! Gumbo forever!

Hey, that's three halves. Math doesn't work like that, and Maine doesn't either. To be fair, though, Stephen King is the first thing I associate with Maine.

When I think Maryland, I think, "Next to Washington, D.C." Just me?

As someone who once lived in Massachusetts, this isn't exactly true. There's a third season, and it's St. Patrick's Day.

Is this directed at people in Michigan or people who come to Michigan? Either way, I agree.

It doesn't get much more north or more white than Minnesota. And by white I mean snow and people.

Mississippi has a river! And the most fun state name to spell. Don't sell yourself short, Mississippi.

Sounds like the weather in Missouri is misserable. Get it?