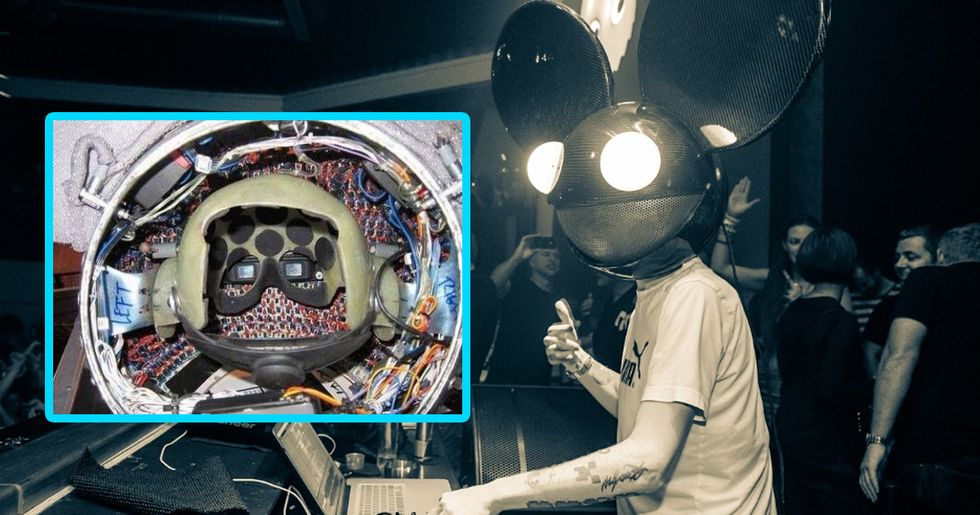 44 Pics of Everyday Objects Like You've Never Seen Them Before

No matter how much time you've spent on this planet, there's always a new way to see things.

Some things are way bigger than you'd ever expect, while others are much smaller.

Basically, we live in a beautiful, interesting world.

If you enjoy getting new perspectives on everyday things, you're gonna love the photos we have here. Get ready to change the way you think!

A tube of toothpaste:

So that's how all those swirly stripes look before they appear on your toothbrush. Who knew?

This looks way more complicated than I would have expected. Fascinating!

Huh. I'll admit I've been curious about these!

Call me crazy, but this is maybe the most beautiful, mathematical vegetable I've ever seen. This next photo is also pretty amazing.

So many moving parts! I have a whole new respect for photographers.

OK, so fireworks aren't technically an everyday object. But maybe they should be! Every day is better with fireworks!

I still have no idea how these work. But they look ideal for storing dinosaur DNA!

I think I expected these to be one color all the way through. Nope!

So simple, yet so mesmerizing. This next photo legitimately surprised me.

I had no idea there was such a large empty space in morels! I guess you learn something new every day, huh?

That's right, kids. Deadmau5 has been a human wearing a helmet this whole time.

Perfect. Next time my card doesn't work at the grocery store, I can at least explain that I know what it looks like on the inside.

If you had asked me to guess what this was a cross-section of, I don't think I would have guessed "pinecone" for about three hours.

And all this time I just kinda assumed it was a solid ball made of a single material. I was wrong!

You probably knew the tape coiled around inside, but did you know it was this densely packed?

New life goal: Get a water jet and cut everything in half with it.

So many nooks and crannies! No wonder they get clogged sometimes.

This is much more woody than I was expecting. And not at all prickly!

This is how a key opens a lock:

I don't know about you, but I am completely mesmerized. This next photo had pretty much the same effect.

For a woman who's constantly walking on her tiptoes, Barbie sure doesn't have much in the way of skeletal support. Just another reason why she's incredible, I guess.

This confirms what we've known all along: The last bite is the best bite.

Lumber from a tree:

This is an example of how lumber is cut from a tree. Because, you know — trees don't automatically come in lumber shapes.

Leftovers don't stand a chance against this guy.

It's a hen...in a duck...in a turkey. And it looks delicious. So does this next picture!

Ah, yes. Here you can see all the wonderful, buttery layers of a perfect croissant.

It certainly doesn't look nearly as comfy without all the foam. But it's fascinating all the same!

I'm not a huge fan of wasps or anything, but you have to admit their architecture is pretty stunning.

Here's a breakdown of what an egg looks like from minute to minute when placed in boiling water. If you ask me, 9 minutes is the sweet spot.

This is impressive and all, but I don't think drivers are going to be too thrilled with the pothole this sample created. Next up is an undersea cable!

This is somehow both more intense and less intense than what I imagined it to look like. Looks like it could probably stand up to just about anything the ocean threw at it.

I couldn't tell you the first thing about banana trees, but I can tell you that I had no idea they grew in spiral shapes!

So that's what a tortoise skeleton looks like! You learn something new every day!

I'm not even going to pretend I understand what's going on here. But I am impressed by all of it.

Here's what an armadillo looks like when it's rolled into a ball and also is a skeleton. This next one might actually make you a bit angry.

OK, OK, nothing too mindblowing in this one. Still, you don't see hotdogs like this every day, do you? (If so, you should stop.)

If you look closely, you can see the hair and other dirt particles it picked up! Cool! And gross!

I, for one, am glad they didn't also decide to cut the racecar driver in half for this picture.

These boots were made for walking. ...Until you went ahead and cut them in half, that is.

Believe it or not, this is actually how the cruise ship company chose to add length to its ship: It cut the ship in half and added the space in the middle! Next up is one of your Instagram favorites.

I had no idea they had some kind of jelly filling all this time. I feel like I've been missing out.

A bowl of Ramen noodles:

I'm pretty sure the ones I get have way more empty space in the bottom. Guess I'll have to cut it in half to check.

This looks a lot like a brain MRI, huh? I've always said walnuts are the brains of the nut world.

A hockey helmet and a football helmet:

They look pretty similar from the outside, but they're actually quite different when you get the cross-section view! Share this with someone who always sees the world in a unique way!