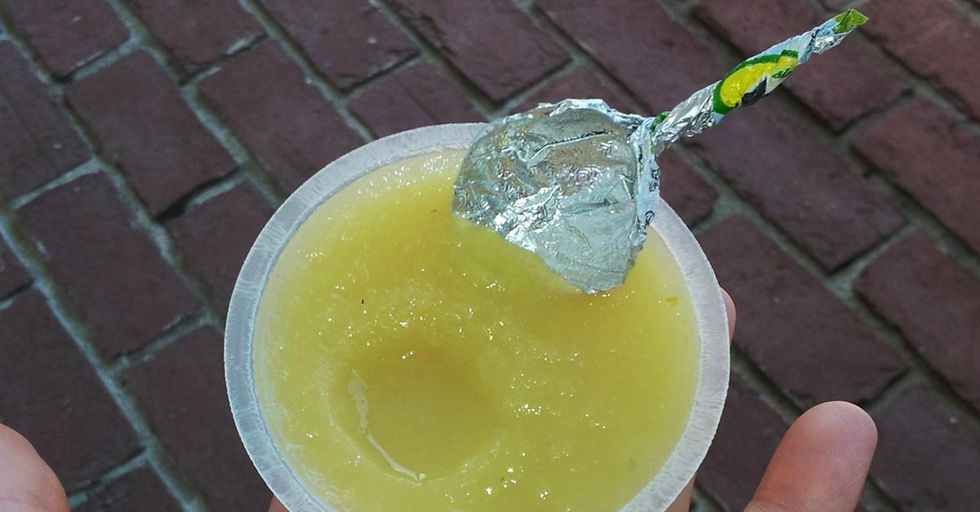 Parents have a lot of obligations to their children — they have to love them, take care of them, not act like insane maniacs, and, most importantly for our purposes here today, teach them how to use the most basic of items. But not all parents are able to check all those boxes, as evidenced by the number of people who aren't using — and maybe have used — these items correctly.

That's right, some of the handy little gadgets and do-hickeys we've been picking up from Target or stealing in bulk from Starbucks all these years have secret uses that will change the way you use them.

So read on to learn about all the innovative ways you can use the stuff you already have in your house. And pass this information on to the people in your life you see using these items wrong as well — once you know how to use these things, you'll see others using them wrong all the time.

You're using it wrong: applesauce containers

I know what you're thinking: "how can I be using applesauce containers wrong? I know to peel back the cover and use the little plastic cup as a bowl!"

But did you even think about a spoon, smart guy?

That's right, these containers' aluminum flaps can make them into the ultimate portable snack. Just twist up that bad boy and stop bringing metal spoons with you everywhere.

You're using it wrong: dental floss

We should all be flossing our teeth at least nightly, but maybe one of the reasons literally no human being on earth does that is because wrapping that floss around our fingers slices through them like a freshly-sharpened knife through a dollar store jumbo frank.

But sliced-up fingers don't have to be the cost for clean teeth gaps.

You can make a beautiful circle of floss with all your fingers working together, much like they do when they combine to make a fist.

You're using it wrong: your garlic press

When you're making an inordinate amount of spaghetti every day as a sick form of penance for letting the only girl you've ever loved slip through your fingers, your garlic press is going to be getting a lot of use.

But how do you wash that garlic press?

In the dishwasher? Ooh, sorry, but that's wrong. It turns out, garlic can hide in all the little nooks and crannies of the press, and it's only by hand-washing the tool that you can ensure it's actually clean.

You're using it wrong: that tiny pocket on your jeans.

And here's how you're using it wrong: you're not using it. In fact, it might even make you angry, because what could you possibly use it for? It doesn't fit any of the objects we usually carry around in our pockets, like our phones, our keys, or our spare bags of spaghetti just in case we run into Bethany.

It's meant for pocket watches.

And that's where you're getting it wrong — you can fit a pocket watch in that teeny tiny little pocket. Why are we not carrying around pocket watches anymore? They are objectively the coolest kinds of watches! You check a pocket watch and people will think you're a professor.

You're using it wrong: soda lids.

A lot of people think soda lids are only for covering your fountain soda when you plan on taking it into the car or for peeling into triangles to use as a toothpick when you have a piece of popcorn stuck in your teeth.

But soda lids have another use: they're also coasters.

Those little ridges on the bottom of a soda lid actually turn that bad boy into a coaster. That means you can bring fountain sodas home and keep them from staining your nice wood coffee table (at least until you get a piece of popcorn stuck in your teeth).

You're using it wrong: your mixing bowl and beater.

It's important to get your mixing bowl in tip-top shape since the ultimate sign of loving someone is making them a cake (which I tried to make for Bethany but she was allergic to walnuts so she told me it was over as she was turning blue).

You've got to chill these bad boys out.

Freezing your mixing bowl makes it work even faster, so if you know you're going to be making a cake in the morning, toss the bowl and mixer in the freezer for optimal mixing.

You're using it wrong: the boxes on plastic wrap

If you're like me, you were so traumatized by not making enough pasta to feed your college girlfriend Bethany and therefore losing her to that dude Ian from the Rugby team that today, you make tons of food every time you cook. That makes plastic wrap essential for storing leftovers.

But you'll want to get your fingers in those holes... through the box.

Instead of fumbling with the entire box, you can punch out the sides and use the roll of plastic wrap — still in the box and therefore able to be severed on its serrated edge — like an actual roll. Honest to god, it is a game-changer.

You're using it wrong: your plunger.

Let me guess, you've got this flat, clay-ish red plunger next to your toilet in case your throne backs up? Very responsible and forward-thinking of you, but I've got some bad news.

You probably bought the wrong plunger.

The plunger we all think of whenever we think about plungers is, in fact, designed for sinks. If you want a toilet plunger, you need one with the type of head pictured above — one that's black and long. That kind of plunger will bust out blockages lickety-split.

You're using it wrong: soda cans and straws.

It's been said that drinking some of the beverages like coffee and soda do less damage if you drink them through a straw. But the problem is, the straws always flippin' all around! Imagine your boss sees you impotently trying to wrap your trembling lips around a straw. you'd be fired on the spot.

Turn that pop-top around, stick your straw inside, and you've got yourself an easily sippable drink that will never mess with your mind.

You're using it wrong: the spaghetti spoon.

The hole in the center actually has a purpose.

That's right, if you fill the hole in your spaghetti spoon with uncooked pasta, you'll have exactly one serving of pasta for an average person. That'll keep you from making too much pasta or, like I did when I tried to cook spaghetti for Bethany, not even close to enough and then I chose to eat it myself and I get why she left.

You're using it wrong: that metal spatula/nonstick cookware combo.

Maybe when you moved into your first apartment, you went down to Ross Dress For Less, a store which for some reason sells cookware, and bought yourself a nice spatula and cast iron skillet.

Hopefully they weren't both metal.

Too many people use their metal spatula on their nonstick cookware, and it is ruining that sweet beautiful pan that so graciously provides you with eggs every morning! The metal scratches off the coating, so make sure you use a wooden spatula if you're turning over your fajita toppings while they cook.

You're using it wrong: sponges.

Those cheap yellow and green sponges we all have sitting in our dish-drainer are convenient for scrubbing off dried-on food from plates and giving your cupboard a quick wipe-down, but they might be making your kitchen dirtier if you use them wrong (which you probably are).

But you've got to keep them clean by putting them in the microwave sometimes.

Every couple of days, you'll want to get these sponges wet and toss them in the microwave for one minute. That'll get your sponges nice and clean (but you'll still want to toss them after a few months).

You're using it wrong: your toaster.

Here's another device you probably think you're using right. "I put in bread, and I get toast. That's literally all its supposed to do." And that's true, but in this case, using this item wrong may make it do something you don't want it to do: kill you.

Unplug that thing when you're not toasting.

Haven't you ever watched This Is Us? Sudden toaster-sparked fires are more common than you might think, so when you're not toasting anything, unplug that toaster.

You're using it wrong: Toblerone.

But there's a better way.

You're using it wrong: your gas gauge.

First of all, yes, the point of a gas gauge is to tell you how much gas your car has in its tank. Absolutely. But there's one tiny detail people overlook that costs us millions of hours every year — the tiny arrow on either the right or left side of the gas gauge icon.

It tells you which side your gas tank is on.

How many times have you driven into a gas station and pulled up alongside a pump, only to forget which side your tank is on? Then you drag the handle over the hood of your car, and it's all awkward, and everyone getting gas looks at you like an idiot? The arrow by the gas icon will be on the left if your tank is on the left side of your car and on the right side of the icon if the tank is on the right. Check that every time you fill up and you'll never have a group of people at a gas station look at you like an idiot ever again.