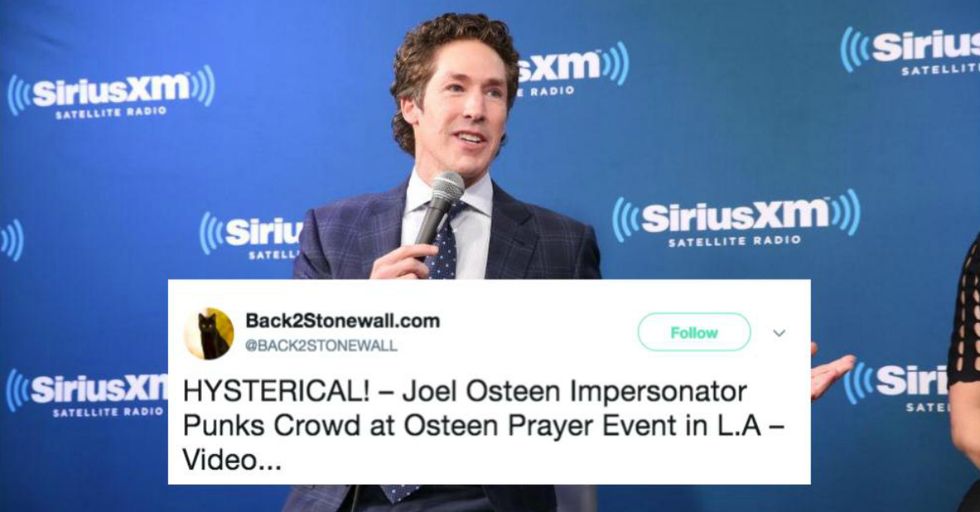 If you look like someone famous, you have to dress up as them and try to trick other people into believing you actually are them. It's a law, basically. If you can film it, even better. Sometimes it can get you into some sticky situations, but honestly, that just makes it all the more entertaining for the people watching everything go down.

Out of all the people to look like, megachurch pastor and televangelist Joel Osteen is right up there. He's just the right amount of very popular and ultra-controversial to hit all the right notes. Luckily, there's someone out there who looks just like him. And yes, he has a camera to capture the whole thing.

This man is not megachurch televangelist Joel Osteen.

It's a guy named Mike Klimkowski who happens to look an awful lot like Osteen. So what does Klimkowski do with his Osteen-ish looks? He breaks into Osteen's own speaking events, obviously.

He tried it recently at an event taking place at the Forum in Los Angeles. First step: Get a parking spot without paying for it.

This would have been very difficult for Mike Klimkowski. But for the Ost*? It was a cinch. *Joel Osteen's nickname, probably.

Once again, Klimkowski got through the barrier with ease. "You can come on through here," one of the security guards said. "God bless you," Klimkowski said. He was really getting into the part.

Throughout the social engineering experiment, people were so excited to see Joel Osteen.

Of course, it wasn't actually him, but Klimkowski went along with it anyway. He took selfies, said "God bless you," and called out, "Go 'Stros!" Just like Osteen would do. Probably.

Believe it or not, Klimkowski made it all the way up to the Forum stage with no pushback whatsoever.

He called out to people waiting in their seats. But that's when people started getting suspicious.

Check out the entire video here:

You won't want to miss the ending when the Osteen cops get involved. In the end, though, it's not like Klimkowski was doing any harm. It's not a crime to bless people, is it? Regardless, we thought this guy was hilarious. We can't wait to see which Osteen event he crashes next!