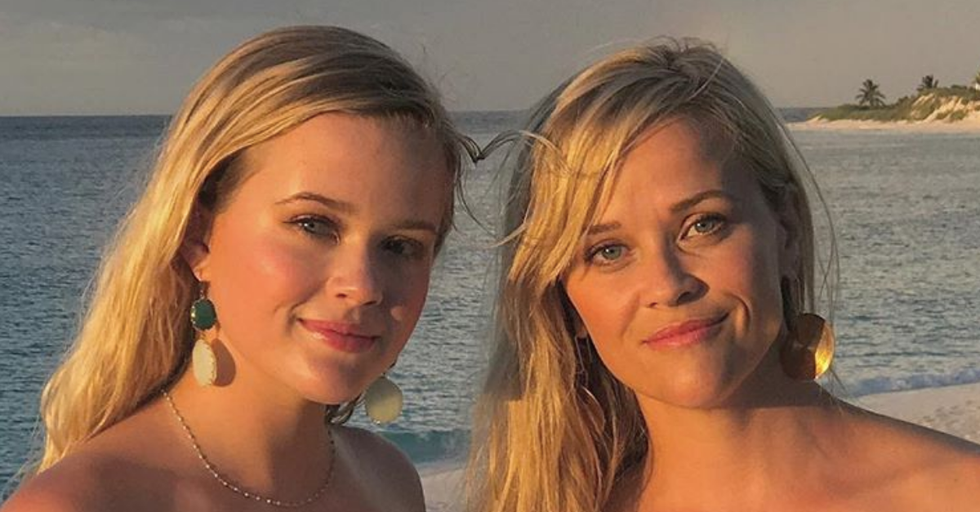 Everyone Is Saying the Same Thing About Ava Philippe's New Boyfriend

The general public is always chomping at the bit for juicy new information about the love lives of celebrities. You don't have to look much further than Bennifer and Brangelina to see how the world treats celeb news. People want to know every single detail about the lives of celebrities, and thanks to social media, celebs feel more accessible than ever.

But there's a weird thing happening now, thanks to Instagram - the children of celebrities are becoming famous within their own right. Whether they're in the entertainment industry or not, there are some famous kids who are now steadily moving into the spotlight thanks to their famous parents.

One young woman who happens to have famous parents is Ava Phillippe. Her parents are, of course, Ryan Phillippe and Reese Witherspoon. With a large social media following of her own, Ava is quite the young celeb. Recently, she posted a pic with her boyfriend, and everyone had to say the exact same thing about him. Keep reading to find out what it is!

But first things first, who is Ava Phillippe?

Ava is the eldest child of Reese Witherspoon and Ryan Phillippe. She is the spitting image of her mother.

They also starred together in the iconic '90s over-the-top teen movie, Cruel Intentions.

Witherspoon and Phillippe were engaged in December 1998.

Then, in September 1999, Ava was born. In October 2006, Witherspoon and Phillippe announced they were separating.

Ava has been in the spotlight for quite a while.

In 2017, Ava was one of six American debutantes at Paris’s 25th annual le Bal des Débutantes. She looked like an absolute princess.

Can you imagine being a debutante?

A dream! But despite being the child of super famous parents and having a literal king be her debutante date, Ava appears to be like any other young woman.

Her Instagram, with over 700,000 followers, offers a glimpse into her life.

Like all of her Coachella adventures. How cool is she?

She also changes up her hair a lot.

Everyone should have rainbow hair once in their life. Maybe this will be my next look?

Ava also uses her platform to talk about issues that she's passionate about.

"Let us celebrate the accomplishments of women of all sorts today and always as we all work toward a future without gender-based inequity," she wrote in the caption of a photo on International Women's Day.

She also posts about being a big sister.

How cute is this picture and caption? I'm not crying, you're crying!

This is just a doodle? It looks like it could be in a museum to me.

For most of us, being in the spotlight at 19-years-old because of having famous parents would seem overwhelming.

But it's awesome to see Ava use her Instagram platform for good - like encouraging her followers to vote.

Seriously, how are these kids so adorable? Also, Ava is the spitting image of her mother.

I mean, hello! These two could be twins.

I'm sure it gets old to hear, "You look just like your mom!" But then again, your mom is Reese Witherspoon.

It's not shocking that Ava has nearly 750,000 Instagram followers.

Her page is super cool, with lots of artsy shots and snaps of her family and friends.

Can we be invited to Reese Witherspoon's birthday?

These two are totally mother/daughter goals.

People are always pointing out how much she looks like her parents. "You are the perfect mixture of your mom & dad. So beautiful," one fan wrote on this pic.

People literally fight about which parent she looks more like...

"What are [people] even talking about? Am I the only one who sees she has Ryan's exact face?? All her features are his," one Instagram user commented on this picture of Ava from a photoshoot.

But Ava is her own dang person!

She pulls off this bright pink hair like nobody's business.

She also knows how to rock an awesome costume.

She wins whatever costume party she was going to this night. It's totally fine that I want her to be my BFF, right?

Ava's hand on her mom's hand! It's too cute.

Like most young folks with a large social media following, Ava sometimes partners with brands.

For a second, I really thought this was Reese Witherspoon. Okay, yes, I can see how hearing that all the time would get real old, real fast.

It makes sense that Ava is so glamorous and cool...

She's named after Hollywood royalty, after all. Witherspoon mentioned in an interview once that she was named after Ava Gardner.

She also just finished her first year of college!

When Ava went away to college, her mom cried.

Stars! They're just like us! “It’s weird when your children go away to college. It’s hard," Witherspoon said in an interview with Ellen DeGeneres. “... I might have gone into her empty room, laid down on her bed and cried when she went to college."

Using her platform for good

With such a big social media following, it's cool to see Ava use her privilege and platform to speak out about important issues.

She hangs out with other members of "Young Hollywood," like actress and creator, Rowan Blanchard.

In her spare time, she's also a model.

Because, of course she is. Is there anything Ava can't do? Well, apparently escape comparisons to her parents...

Ava posted an Instagram with her boyfriend, and people had a lot to say about it.

Because of course they do. Many people said that Ava's boyfriend resembles her father, Ryan Phillippe. Uhhh...awkward.

This is a young Ryan Phillippe.

There are so many comments...

"He looks so much like your dad omg," another comment read. One person wrote, "Is it just me or does her new beau have a little bit of Ryan in him?" When someone finally commented, "He does not look like your dad," Ava had a hilarious response. She replied, "big thx." I can imagine that Ava is ready to move on from this comparison. Share this story with a friend who loves celeb news!
20%

$3.58 $2.86
Buy Now
See More Deals
We hope you find these deals as awesome as we do! Just an FYI: we may receive a share of sales from links on this page