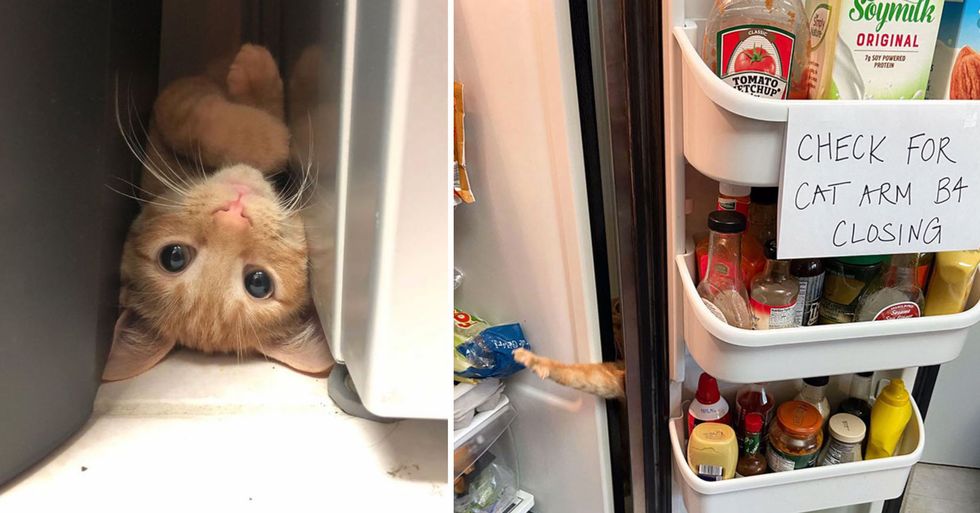 Everyone Loves Carrot the Mischievous Cat Who Gives His Owners Anxiety

Carrot the orange tabby cat is not only the cutest thing ever, but he's also the most mischievous!

Keep scrolling to learn about his story...

Well, if you don't, there's probably something slightly wrong with you.

But with every pet...

Comes a lot of responsability.

Caring for a pet isn't as easy as it looks...

And one cat has certainly proved this to his owners.

He is an orange tabby cat who is nearly 2-years-old, and even though he is utterly adorable he is perhaps one of the most mischievous cats you will ever meet.

Carrot's owner, who runs his very own Instagram account, explained how he came into their lives to Bored Panda: "One of our best friends works at a local animal hospital. Someone found him at a gas station and brought him into the hospital. He was fostered for a bit by someone else but we suspect it wasn’t a good situation because he was very stressed and they ended up surrendering him back to the hospital."

He was in and out of the hospital for a few weeks...

"Carrot then lived at the hospital a couple of weeks, and our friend who worked there brought him over to our apartment one weekend when she was looking after him."

"It was pretty much love at first sight and we immediately bonded," his owners revealed. "We took him in to foster the following Monday and by Friday (less than a week later) we officially adopted him at 12 weeks!"

It didn't take long for him to settle into his new home.

Carrot is his owners' first cat and they couldn't be happier with their new addition.

Even though he is so small...

He has an unbelievable amount of energy.

Carrot is perhaps the most playful cat in the world...

"He is extremely playful and has the biggest personality. The way to his heart is to play for sure," his owner explained.

"Any time you engage him to play he will respond. He loves tag, play biting your hand, being chased, and playing fetch with his tiger (his favorite stuffed animal since he was a kitten)."

But if there's one thing this cat hates...

Is being alone. "He is also very clingy. If he’s not napping in his closet, he’s never more than a foot or two away. He has special nap spots in every room in the apartment that he picks depending on what room we are in. He likes to act like he doesn’t like cuddling when we’re awake, but almost every night I wake up to him sleeping on my stomach or chest."

Carrot is also very food orientated, which isn't an unusual trait for a cat...

But his food obsession rose him to internet fame recently.

Carrot's owners explained the situation, saying, "He thinks it’s a game to stick his arm through the fridge crack and grab us while we are in there. No, he has never been hurt by this (lots of people on the internet seem to think that) and luckily we are only a house of 2, are very careful, and we know when he’s doing it. The sign was put up as a reminder."

His owners are constantly reminded by the sign to not shut the fridge door without checking for a little paw first...

"The photo was not staged, and we actually didn’t even think of taking the photo until we saw him do it with the sign and laughed at how perfect it was. If it was staged we would’ve cleaned out our fridge!"

Of course, having to carefully check your fridge every time you open it isn't ideal...

But just look at how cute he is!

And he even rides along in the car sometimes!

Make sure to follow his Instagram page here. In the meantime, keep scrolling to read about the street cat who lead a woman into a supermarket to buy cat food...