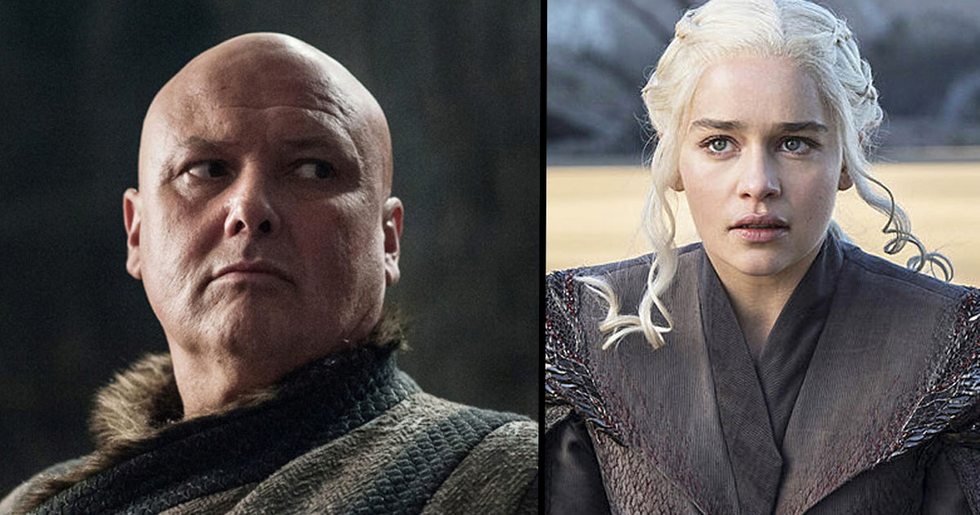 With so much going on in episode five of the last season of GoT,  we think that we can be forgiven for not acknowledging a seemingly unimportant scene.

But, luckily for us, a few eagle-eyed fans spotted an exchange between Varys and a young girl from the kitchens which proved to be vitally important.

It would appear that, prior to his demise, Varys had been plotting to poison Daenerys. Unsuccessfully, of course, but this may be crucial to understanding why Daenerys did what she did later in the episode.

Could she have known that Varys was planning to betray her? Was this just one betrayal too many for the young Targaryen? Or was she always destined to destroy King's Landing?

And maybe it wasn't poison that Varys put in her food, but something else entirely as one fan has suggested...

This is Varys aka The Spider.

He was a skilled manipulator and was known for having a whole network of informants, whom he called his "little birds", spanning across two continents.

But his life did not start off very well.

Varys was born a slave and was eventually sold to a sorcerer who forced him to drink a potion that rendered him unable to move or speak but still able to feel and then cut off his penis and testicles. Ouch!

The sorcerer then left him on the streets to die.

But Varys was strong and did everything he could to stay alive. He eventually became an accomplished thief, before realizing that information was more valuable than any other goods he could steal.

His notoriety as an information trafficker grew and he became a member of the Small Council in the Seven Kingdoms.

Where he was known as the Master of Whisperers. This profession also gave him a new name: Lord Varys. This was a definite step up from his difficult upbringing. And it was on the council that we started to see where Varys' allegiances lay.

In Season One we saw him being a bit of a sneaky f*cker.

Although he made it clear that his intentions were always to serve the realm. And he did show empathy with Sansa when her father was beheaded... But he was still an arrogant tw*t.

In Season Two, Varys made friends with Tyrion and Daenerys prophesized the burning of King's Landing.

Varys and Tyrion bonded over their own cunningness. Varys even complimented Tyrion after he plotted a scheme to test the Small Council's loyalty, saying: "a very small man can cast a large shadow." We also saw Daenerys prophesize walking through a destroyed throne room with ash falling down around her. How could we have forgotten about this?!

In Season Three we saw Varys continue to do what he thought was best for the realm.

Namely by trying to ensure that Littlefinger does not get his way, saying "he would see the Seven Kingdoms burn if he could be king over the ashes." And most fans agreed that Littlefinger was the one to watch out for.

In Season Four, Varys again tried to do the right thing but, as always, without exposing himself to those in power.

He warned Tyrion that Cersei knew about his relationship with the prostitute, Shae, and told him to send her away to protect her. Later, when Tyrion was on trial for murdering Joffrey, Varys openly testified against him but upon his conviction, helped him to escape. Was this all a part of his big plan to help to save the Kingdom?

As the next season kicked off, we saw Varys reveal his allegiance to House Targaryen.

He convinced Tyrion to help him to help Daenerys to win back the Iron Throne. Tyrion soon took control of the city of Meereen in Danerys' absence and Varys awarded him by giving him access to his spies. But in hindsight, fans have realized that Varys was never loyal to one King or Queen specifically, he simply supported the person that he thought was best for the job at the time.

As Meereen began to prosper in Season Six, Varys set out to source further allies for Daenerys.

He travelled to Drone where he successfully formed an alliance with Ellaria and Olenna Tyrell who, too, hated Cersei for her actions which led to the death of all the other Tyrells. With their forces complete, Daenerys and her inflated army set sail for Westeros. But fans speculated that this was all Varys had to offer... how wrong they were!

In Season Seven, Varys continued to help Daenerys to plan their attack against Cersei.

But Daenerys was not happy about his past allegiances and firmly (and scarily) warned him that if he betrays her, she will burn him alive. Who needs enemies when you have friends like this? But to be fair to Daenerys, she wasn't far off the mark. Varys was going to betray her.

And it seems that Varys was growing increasingly concerned about some of Daenerys' actions.

Telling Tyrion that he thinks she shouldn't have burned Randyll and Dickon Tarly alive. Clearly, he was coming around to the idea of betraying Daenerys. For the greater good of course! But the question is, did she deserve such betrayal?

Varys has always made it crystal clear that his priority is to put someone on the throne who will serve the needs of the common people.

Lord Varys TOLD Daenerys he would support WHOEVER he thought would be the best ruler... he’s about to shake everyth… https://t.co/YmmzGfAn1L
— So Hollywood (@So Hollywood)1557108445.0

Saying to Daenerys: "You wish to know where my true loyalties lie? Not with any king or queen, but with the people." Basically, he will support Daenerys as long as she has the best interests of the people in mind, but it seems that this is no longer the case and he knew it. Well, she can't say he didn't warn her...

But he also said that he would never conspire against her.

A promise that he probably shouldn't have made as it soon became clear that she would no longer take the advice of any of her allies or friends and would simply do whatever the f*ck she wanted.

Like after The Battle of Winterfell when she refused to let her soldiers recover, even though Sansa advised her to do so.

It was this decision that led to the death of her dragon, Rhaegal, and her friend, Missandei. These actions made Varys distrust her further and doubt her ability as a fair ruler. It was pretty damn stupid of her.

He thought that she resembled the Mad King...

And he decides that Jon Snow would be a better ruler for the kingdom. Especially when he heard him advise Daenerys against burning King's Landing to the ground.

Even more so given the fact that that he now knows that Jon is actually Aegon Targaryen.

Information that we suspect he was going to use to turn the people against Daenerys in favor of Jon as their ruler. Come on Daenerys, you should know by now that no-one in GoT can keep a secret.

We then saw him writing down the truth about Jon and his parentage.

Obviously, with the plan to expose the truth but, unfortunately for him, Tyrion had already betrayed him by telling Daenerys about his plans to share the information. Ouch! Betrayal stings when it's on the other foot doesn't it, Varys.

We then saw the final moment between Tyrion and Varys.

Wherein Tyrion admitted that it was he that betrayed his friend and Varys says that he hopes he is wrong about Daenerys. But, sadly, he was right...

Varys is no more. Death by a dragon. Not a great way to go.

Fans are even speculating that the letter is the reason that Daenerys torched King's Landing.

Did she see ravens approaching when the bells rang out and flipped in case they brought news of Jon's parentage? Crazier things have certainly happened.

And now all that is left to find out is whether he managed to get word to anyone before his untimely demise.

Perhaps he reached Sansa? Would she be brave enough to take on Daenerys having heard what happened to King's Landing? We only wish that someone had stopped Daenerys before she fully went mental on us...

And it seemed that someone did try to.

@BearingMoon When Varys was talking to the lil girl about the kitchen. She said Dany hasn't been eating, and he sai… https://t.co/EjjvFcLoBf
— tiger millionaire🐯 (@tiger millionaire🐯)1557746577.0

Eagle-eyed fans have pointed out a small and seemingly innocent exchange between Varys and one of his "little birds" before he was killed.

But in retrospect, it seems that the exchange wasn't quite so innocent.

It appears as though Varys had been plotting to poison Daenerys by putting something in her food. But, luckily for Danereys, she refused to eat - another clear indicator that she was losing the plot.

Fans who hadn't noticed were truly shocked when they found out.

We didn't think that bald, cuddly dude had it in him! But, as we know, Varys has always played up his effeminate appearance and demeanor to distract from the fact that he is as cunning as they come.

dany is such a smart bitch she immediately knew that jon betrayed her and that varys has been trying to poison her… https://t.co/vNDif1NbOn
— nads (@nads)1557756880.0

She's a smart girl - even if a little crazy - so maybe she already knew that Varys was going to betray her. Or at very least suspected that he might.

If this was the case, it would be a fitting method for Varys.

ICYMI, Varys totally tried to poison Dany at the beginning of the episode. The callbacks to season 1 are amazing:… https://t.co/FnWLKi2DPQ
— iTrevor (@iTrevor)1557727483.0

It was revealed in Season One that eunuchs favor poison as a means to kill someone. Ned Stark said to Grand Master Pycelle: "Poison is a woman's weapon." Upon which he replied: "Yes, women, cravens... and eunuchs."

And that could be the reason that he left his rings on the table when he got arrested.

WAIT. WAIT. Was Varys trying to poison Daenerys in the beginning of the episode? Is that why he kept asking the lit… https://t.co/bvulExIVV5
— Alejandro Melendez (@Alejandro Melendez)1557792351.0

This is where he must have kept his secret stash of poison! A little late to try and cover your tracks now though...

Although perhaps it wasn't poison.

It could have been some sort of concoction to make Daenerys act like a crazy ass b*tch. If it was, and she did ingest some, then it most definitely worked. Just maybe not in the way that Varys had hoped. Despite his shortcomings, we are pretty sure he didn't want her to burn King's Landing to the ground.

And, ultimately, he was proved right in his theory about the Mad Queen.

It's just unfortunate that he isn't around to gloat about it! Now we just have to wait to see if anyone is brave enough to take her on in the final episode...