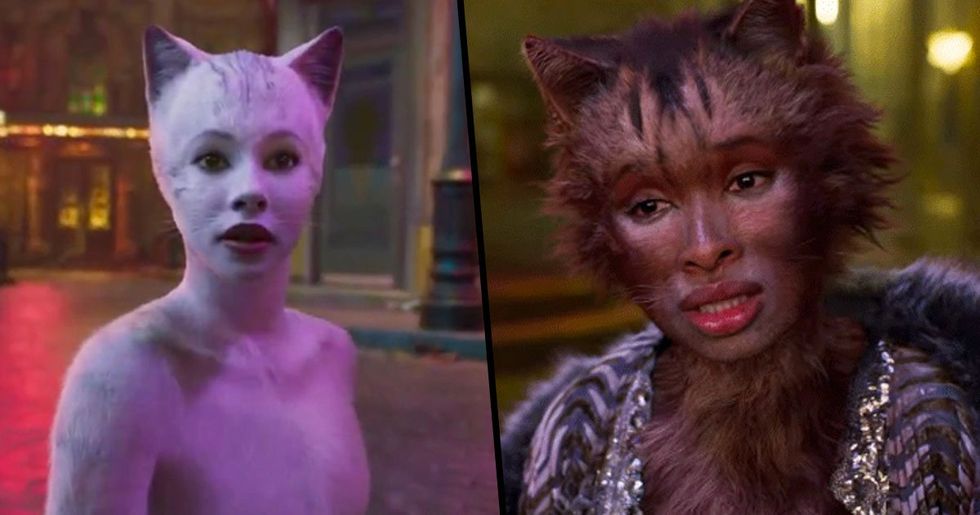 Everyone Said the Same Thing About the New 'Cats' Movie Trailer

When you were growing up, did you ever say that you didn't like something before you tried it? I can recall adamantly telling my dad that I hated rice pudding and him replying, "how can you hate it when you haven't even tried it?," to which I replied: "I know I hate it. It looks gross." In fairness to four-year-old me, rice pudding does look gross.

My point is that we learn as children not to judge a book by its cover, which is why, I, like many other folks, have refrained from slamming Tom Hooper's upcoming adaptation of the hit musical Cats. That being said, when I saw the new trailer yesterday, I swiftly decided that I had given this movie enough mouthfuls to confirm that it's just as terrifying as I had imagined it would be.

Nobody - I repeat, nobody - should be made to watch a furry James Corden singing show tunes. The world is anxiety-inducing enough already.

But don't just take my word for it, here's what everyone else has been saying. And scroll to the bottom of the article to see the trailer so that you can judge for yourself, if... you know... you feel like you can handle it...

In fairness to Hooper's Cats, the movie does have an impressive cast.

Maybe there'd be less of an uncanny valley effect if the actors featuring in this project were not so well known to us. I mean, it's hard enough to accept these human-like/cat-like creatures as anything other than weird without the added confusion of one of them also being Taylor goddam Swift.

"Wait, is that - is that whatshisface?"

There's nothing that can take you out of the magic of suspended disbelief that's required to fully immerse yourself in the cinema experience than realizing that the cat that you're watching dance around is actually someone that you know from TV, right?

Is this a movie or a bizarre fancy-dress party at Taylor Swift's house?

From watching the trailer, I'm really not sure.

Before I unleash the trailer on you, be warned.

Consider whether or not you can stomach it first. Have you had a big lunch? Maybe you ought to take this Twitter user's advice and "stay safe."

I think that this Twitter user hit the nail on the head...

It just doesn't look right, it looks like the movie is mid-way through production and the CGI-team hasn't been in yet.

But, I mean, who wants to watch a movie with everyone living in a Snapchat filter? The Emoji Movie was bad enough.

I think that I'd sooner watch this version...

School of Rock with a Snapchat filter over it is less offensive to the eye than the new trailer.

So it appears that I'm not the only one that wished that I could unsee furry James Corden...

It really isn't pleasing to the eye...

Does Corden's character vom on someone?

As if the trailer wasn't already gross enough.

What's Hopper thinking with the size of the cats?

A lot of people have commented on the size of the cats in the trailer. The sizes are irregular and inconsistent. Sometimes the cats seem as small as mice and other times they're too large to fit into a trash can... What's going on Hopper? What's going on?

I seriously hope that this isn't true...

Imagine! What size would they be for that scene? Would they be the same size? Would it include James Corden? Why do the cats have boobs? I need to go and sit in the shower.

Petition for a public holiday to be announced.

HOW THE FUCK ARE WE SUPPOSED TO DO ANY WORK WHEN THE ONLY THING ANYONE CAN THINK ABOUT ARE MUTANT HUMAN CAT MONSTERS
— TechnicallyRon (@TechnicallyRon)1563525321.0

We're going to need it to recover from the sleepless night that we'll inevitably have after watching this movie.

I do not envy anyone involved in the making of the Cats movie...

Imagine all of those tireless hours, self-sacrifice, excitement, and then the trailer drops...

A lot of people have been questioning Hopper's creative methods...

The director was certainly thinking outside of the box with this movie.

Imagine the kind of drunk man that would approach you in the park at night and blend that with a stray cat - you get Corden's Cats character.

Well, somebody had to say it...

This movie seems to be attempting the glamour of, say Baz Luhrman's Gatsby, by turning the attractive, all-star cast into hideous monsters. Weird, right?

I think that it's safe to say that there's been a fur tech fail.

The mountain to climb for the fur techies did not reach the summit with the Cats movie.

We've got a psychic in the house...

One Twitter user drew a picture with an uncanny likeness to what you can expect to see in Cats.

When the producers of #Cats don’t cast Emma Watson despite the fact that she has relevant 👏 work 👏 experience 👏 https://t.co/dGsHUy4P0w
— Gabby Birenbaum (@Gabby Birenbaum)1563510826.0

Of course he didn't! They would have looked way better if he had!

How much did they spend on this movie?

It only costs a cool $200 million to terrify the entire world.

The thing is, though, I'm sure that people will still go to watch it.

The trailer may have gotten an almost unprecedented amount of dislikes on YouTube, but I bet that this movie is so weird that people will feel as though they just have to see it.

Providing that the movie theatres show it...

I know that this is fake but, honestly, I think that it is too distressing for theatres.

I think that it may well be a year that the CGI world will try to forget.

Okay, so, are you ready?

I have given you plenty of warning and have prepared you well enough. Heck, maybe you won't agree with any of these guys and think that the trailer is great! I mean, I don't know you, maybe this is totally your jam - if so, enjoy! I, for one, will certainly not be going to see Cats - I've got enough on my plate, thanks.